Another good forecast, two in a row!,  we were off for half a day’s climbing on Yorkshire Limestone. The afternoon turned out hot and sunny with little wind left over from  the last few days, perfect for the often breezy Robin Proctor’s Scar. Situated at the southern end of Norber, famous for it’s erratics – gritstone boulders perched on the limestone. 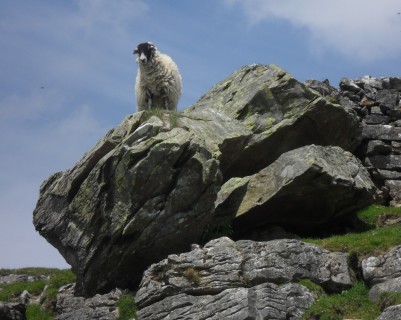 Despite my lack of climbing I made up the team with Dave and Rod, someone has to take the photos. A perfect Dales scenery presented itself when we parked up for the short but steep walk in. 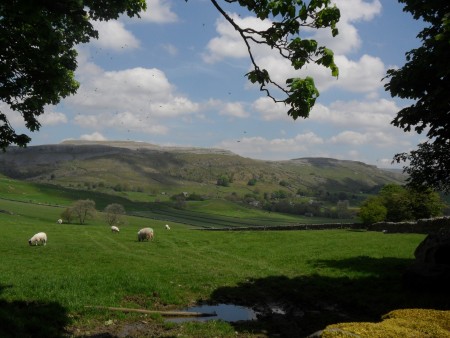 Crummackdale to the north east looked stunning, the crags there providing some classic climbs in the HVS – E2 range. I remember well Olympus, Venus, Little Pink Clare, Feeling the Pinch and Brothers. All brilliant routes requiring delicate technique and offering rather poor protection my diary tells me. That was then but this is now – we are heading for a similar steep crag which has been transformed by a good clean up and bolting, thanks initially to Alan Steele. When we arrived there were about eight other climbers in action – I wonder how many on Crummackdale? Sign of the times. 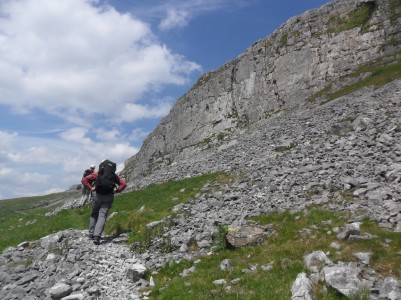 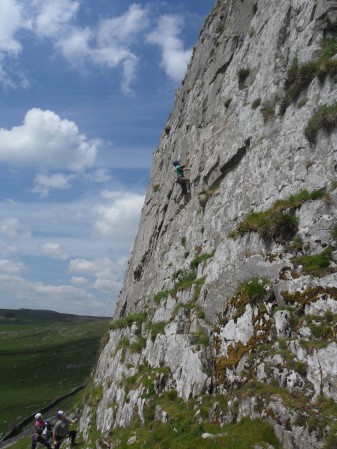 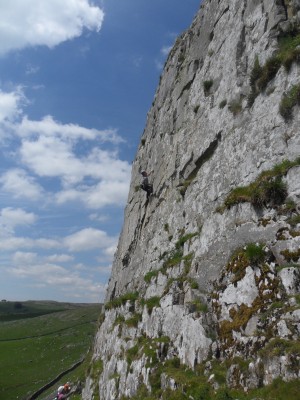 There was plenty of chat with old acquaintances and some geriatrics were climbing at a good standard. This is a superb venue. Sunbathing at the base of the crag was a  treat after the recent cold windy weather.The view is tranquillity itself.  I managed to second a few steep and technical climbs on good limestone, but felt I was so far away from leading at this modest standard which was rather depressing. Think I need to get up to the Lakes and put some easy routes under my belt. 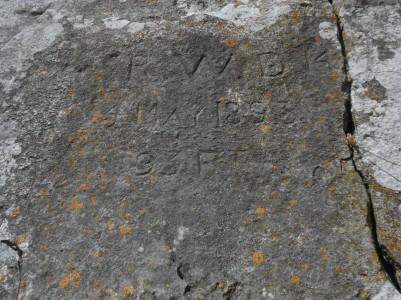 As we left a team were climbing the hard for the grade The Marshall Plan F6b+  –  a perfect backdrop to a perfect day. 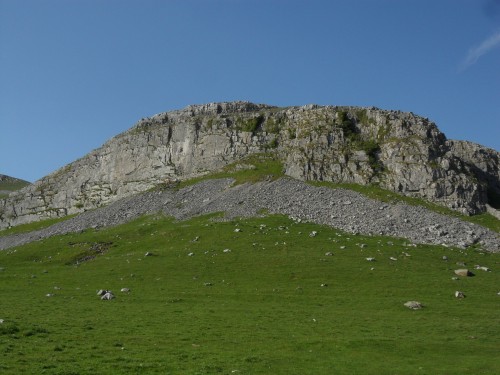 Climber on The Marshall Plan.

PS. Who was Robin Proctor? The story of Robin Proctor is not a particularly happy one. He was a farmer who lived in a Crummackdale farm with his wife and two small sons. He was a good farmer and his business was quite successful. Every night he would take his horse out of the stable and ride down the valley to the local hostelry. These nights of drinking and laughter became longer and longer and sometimes it would be well into the early hours before Robin was ready to make the long ride back up the dale to his house. He would often be so tired and drunk he would climb on his horse and fall asleep.  It was fortunate for him that the horse was old and clever and knew the way back to the farmhouse with Robin Proctor asleep in the saddle. Sometimes he would fall off and wake up with a start as he hit the ground, but often he was still asleep when the horse arrived back at the stable. Being a clever horse it found a way of dropping Robin Proctor into the straw where he would sleep until morning.  One night however the weather was very bad and the wind and the rain were awful. Robin’s wife told him not to go out with the weather so terrible but he would not listen and put on his greatcoat and took out the horse and rode off to the inn. He was not a bad man and before he started drinking he put his horse in the stable behind the inn for some shelter, as had some of his friends. The evening was a very merry one and after lots of beer Robin Proctor had become quite drunk. He did however remember that his horse was in the stable. He went to the stable behind the inn, brought out a horse and set off back home. Unfortunately he was so drunk that he hadn’t realised that he had taken the wrong horse! It was too late. He set out riding the horse back towards his farmhouse and quickly fell asleep. This horse had no idea where it was going but being a good horse it kept on going up the lanes and was soon in the middle of the moors in the terrible storm, walking in the dark with Robin Proctor asleep on its back. The poor horse continued until it arrived at the top of a cliff and, not knowing any better, it kept on going, plummeting over the edge and falling on to the rocks at the bottom! They were both killed instantly and ever since the cliff has been known as Robin Proctor’s Scar. It is said that on wild and windy nights the sound of horses hoofs can still be heard around the cliff.  [Ingleborough Hall Outdoor Education Centre] 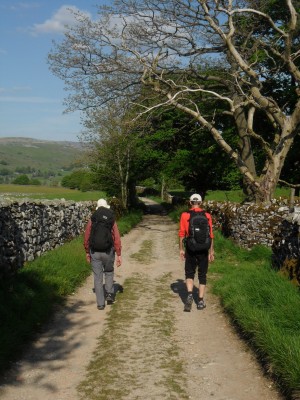