The forecast for Saturday 22nd was good. Cool in the morning but staying dry with sunshine and temps of 12 degrees. The definition of dry in case you have forgotten is “lacking moisture; not damp or wet” The night before Dave had said a trip was on –  to do some climbing in Yorkshire.
It has been so wet this Summer that we doubted that anywhere in the south Lakes would be in condition. It is much easier to take the soft option and go to the more accessible crags near Settle which have the advantage of being bolted.
As the forecast was for cool in the morning, there was frost on my car at 7am, we had a leisurely start and drove over to Settle. Without any discussion I drove into the car park at The Watershed Mill, other cafes are available in Settle. Coffee has become an essential part of our pre-climbing ritual. It has the ability to stop the shakes from the previous night or start them for today!!

A few early shoppers were in the cafe on our arrival but when the cafe begins to fill up you know the coach trips have started to arrive. Coach driver X was having his free tea and chips after depositing his charges. 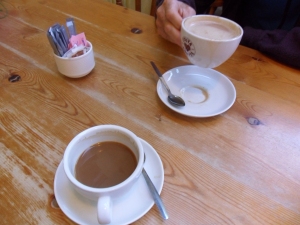 Avoiding the shopping trap in the mill we drove up the valley to park for the short walk into Moughton Nab.

Moughton Nab above the Quarry. 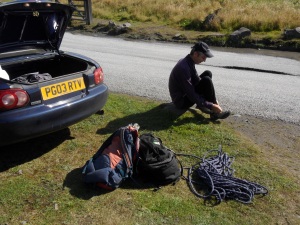 The steep ascent goes round the side of a vast slate quarry which is always busy in the week but fortunately not at weekends.

Once the crags had been reached we traversed below them to our selected area for the day. Penyghent was prominent in the background and brought a more scenic alternative to the industrial waste of the quarries.  We started on a couple of F5’s  to warm up. The rock was dry and the climbs were fairly easy. 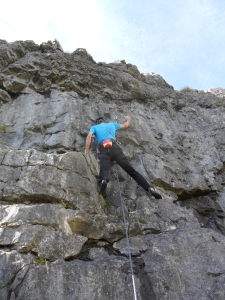 You can see from the photo the bolts that have been used to protect these climbs and convert the crag into a sport climbing area. Basically a lot of limestone crags were not getting climbed on and were becoming overgrown. Following a good clean up previously blank, unprotectable areas of rock now yielded new routes. There was some inevitable blurring of the demarcation of previous traditional climbs that had been lost to the invading vegetation. The popularity of some of these renovated Yorkshire crags says something about the possible future direction of climbing in the UK. A strong traditional ethic still holds on our mountain and gritstone crags but there is room for the Sport crags being developed. We would probably not have been climbing today on this small neglected crag if it wasn’t for the cleaning and bolting efforts of the local climbers. There is room for all sides of the sport without getting too bogged down in ethics.
The day progressed with a couple of F6a’s and an awkward F5+.
By now the sun had left the crag and hands were getting cold – time to pack up and head home, satisfied with some good climbing and the sunshine. 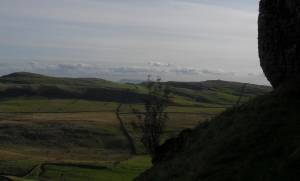 Pendle in the distance

2 thoughts on “Some climbing at last.”