God in His wisdom made the fly

The morning showed the promise of a brighter day, which was good for me in view of the deteriorating state of my waterproofs. The floods of yesterday were subsiding. Back to the bar for breakfast and our fond farewells to our Rumanian friends. The bar was full of local Spanish men starting the day off with a tipple or two and all engrossed in earnest conversation. We hadn’t realised it was Sunday, and all the shops were closed, but managed to scrounge a bit of bread. We pass so many tomato growing areas that we are never short of the odd elicit, or should that be forbidden,  fruit.
We soon put drab Pauls behind us and stopped to share a few words with a worker clearing flood water from drains next to a pig farm.  We didn’t notice till a couple of minutes later that we were now surrounded by a plague of flies. OK I know we’ve been on the go for a week now but we don’t smell that bad! Reckon that the pig farm was the source as there hadn’t been any in the town.  Problem was that having picked up the blighters they were reluctant to leave our sweating bodies.

We were on a gently rising track over a col but there was no breeze to deflect them. Of course we had no insect repellent having never had a problem at this time of year. H was getting more and more distraught but to no avail, no amount of arm flailing and running away helped. The day was spoilt by their presence. As we progressed down the next valley it was crossing our minds as to how we would enter any bar with a black cloud round us and nobody else.  Embarrassing.
We were now heading down to the River Ebro and the scenery was improving again which took our mind off our new found friends. 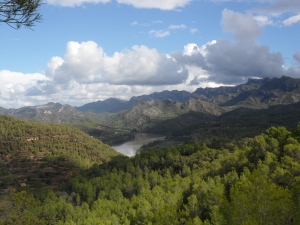 The Ebro is the largest discharging river in Spain and starts way up in Cantabria, Northern Spain. It takes a vast amount of water from central Spain and the western Pyrenees. 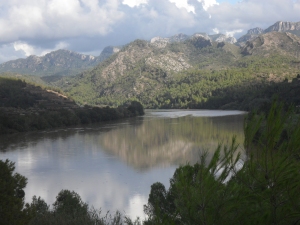 Now down to almost sea level we found ourselves on what looked like an abandoned railway complete with tunnels running parallel to the river and going in our direction. We blindly followed red and white marks for a few kilometres of relaxed easy walking, helped by the fact that after 15k the flies had suddenly all but gone. 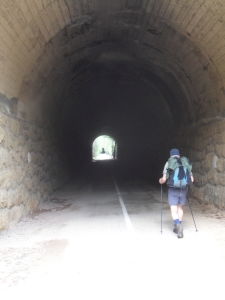 We became a little suspicious when we seemed to have departed company with the river which was nowhere in sight. Out came the compass, a desperate measure, and yes we were heading inland in the wrong direction. Consulting the map was of little use as it did not show the railway ! All we knew is that our destination, Benifallet, was on the other side of the now vanished river.Worse was when we came across a post with a GR99 logo, we had been following the wrong red and whites. Did I mention that we had not met anybody walking the GR7 in the last week so there was nobody to ask now. 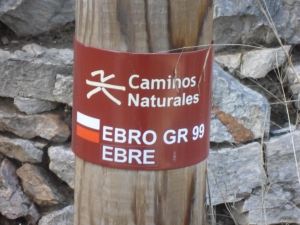 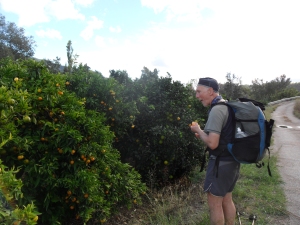 The man from Del Monte

There is a new bridge over the Ebro which  replaced the ferry in 1991. With a little back tracking  we arrive  in Benifallet and the rather smart Hotel Pepo, just as the clientel are finishing Sunday lunch, 5pm!
The receptionist informs us that the restaurant is closed Sunday nights -a common situation in Spain – they must be exhausted from the lengthy lunch. We take a little siesta ourselves.

Wander into town about 9pm, the usual time for Spanish eating in the evenings. The nicest looking bar only does bocadillos [sandwiches]  of which we’ve had our fill, so we go across the road to sample the next bar. Yes they do meals. Unfortunately we can make very little of the Catalan written menu. The waitress  goes off to find someone who can speak English. A helpful young man with good English arrives but seems to be struggling with the menu also. Turns out he is Rumanian and can’t read Catalan!  Talk about a cleft stick.

Seems that all the staff are Rumanian. What is going on in these small villages if the local bars, centres of the community, are being run by Rumanians? The surrounding area is a large fruit growing area so I wonder if they arrived as fruit pickers initially, stayed on, and made good. Any how I wish them success.

The only downside to all this language confusion was that we ended up ordering  bocadillos again without realising!! They were good.