The forecast was good for today, cold with lots of sun. Letting the ice melt from my car I set off to drive leisurely to Slaidburn with the thought of some bouldering high in Croasdale. Lovely blue skies were overhead as I left Cow Ark and motored over Marl Hill, but  the usual view of Ingleborough never appeared. Always a joy to drop into the picturesque village of Newton.

There were some road blockages in Slaidburn so I was forced to start walking further from my destination than I’d intended. Strange that when one is going climbing parking as near as possible to the crag becomes imperative. Within a few minutes of setting off the day seemed to change, the sky darkening with definite rain in the air. Didn’t see that in the forecast!

Walked up the Hornby Road [Salter Fell track] that goes over to Wray eventually. This follows the former Roman Road from Ribchester to Lancaster, so has probably been in use for 2000 years. A few years ago this route was getting heavily eroded by the 4×4 brigade but a change-in-use order closed it to such traffic. Some effective restoration work on the worst stretches has made this through route much more pleasant for walkers or mountain bikers. Trail bikes still have access and can be a noisy intrusion but they are an infrequent incursion. In fact you hardly ever see anybody in higher Croasdale. 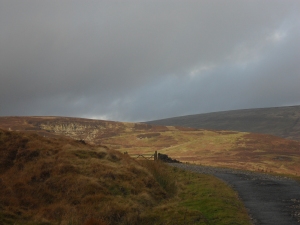 Hornby Road has had several surfaces added since the Romans were here, and in it’s first mile or so was tarmacked up to Croasdale Quarry. Peregrines nest regularly in this quarry. I’m not sure when this large stone quarry was last used [? stone for the M6] The surface of the road is now showing signs of wear and weathering. The road crosses many streams coming off  the fell and the culverts used are said to be from Roman times with the original capstones buried under more modern material. They all seem to be functioning well which says something about the original build quality. 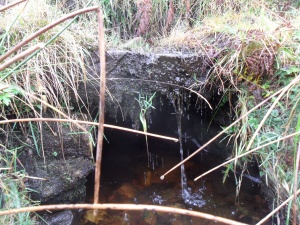 As you proceed up the road there are views down to the right to Croasdale Beck, an alternative track comes this way. A shepherds hut, with remarkable and extensive sheep folds has been restored by United Utilities, who own the land. This can be seen in the valley bottom. A few years ago I bivied in it for a couple of nights with my young grandson. We spent an hour one evening, spellbound, watching a pair of Hen Harriers quartering in lovely gliding motions over the fellside above us. A rare sight nowadays as the species is on the verge of extinction in England. Bowland has been its stronghold but perceived conflict with Grouse breeding [or should that be shooting?] has reduced numbers. Harriers are  ground nesting birds and the wet summer of this year has not been good for them. 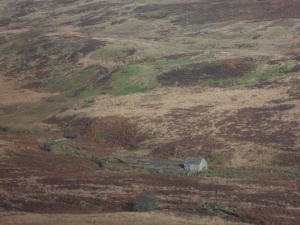 Carrying on up the now rocky track the boulders I was hoping to play on became visible on the far hillside – marked on the map as Great and Little Bull Stones. The weather was poor by now with a cold wind and drizzle, so hopes of climbing diminished. As I approached the watershed at 416m there was a herd of Belted Galloway cattle grazing on the rough pasture. These rough haired cattle thrive in windswept moorlands and they are said to produce very tasty beef. Their thick hairy coats are more like a Yak’s than a cow. 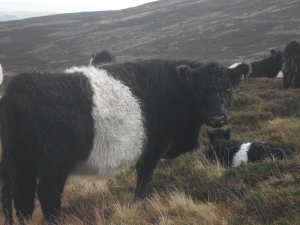 Soon I was taking my familiar path up to the Bullstone boulders. They are a very extensive group of gritstone boulders spread across the hillside for over a kilometre. A few years ago my friends and I had a concentrated attack on these rocks and produced about 300 bouldering problems.    [see   THE BULLSTONES pdf1 ] In places the rock and the routes are of the highest quality but in view of their remoteness, an hours walk, few people visit them. That ensures a wonderful wild quality to a days bouldering here. Today wasn’t going to be one of them – with low damp cloud and a cold wind. Still I enjoyed my walk along the vague path below the rocks of Great Bull Stones with views first west across to Wolfhole Crag and Lunesdale; and then south east down Croasdale to Ribblesdale and Pendle. 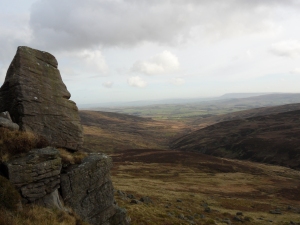 The fell lies on the southern slope of White Hill, 544m, one of Bowland’s highest hills. The views from this wild spot include Morecambe Bay, the Lake District and a full in your face Yorkshire Three Peaks. Once this whole area was out of bounds on a private grouse moor but since the 2000 CRoW act anyone has free access to wander – few do. It wasn’t worth the trudge up today.

Traversing the hillside I soon came to another group of boulders, nearby is a unique feature on these fells. A large stone trough has been  hewn out of an in-situ boulder and left abandoned on the fell. It is about 5ft square and must weigh a ton. What value in a garden centre? 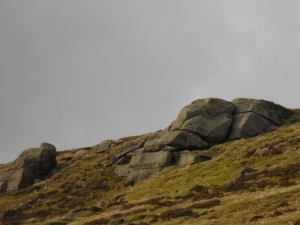 Arriving at the last boulders – the diminutive Calf Stones. There was a little sunshine and I was by now warmed up with the exertion, so it was on with the rock shoes and a few low problems sorted.

Satisfied with the day set off down the heathery track to cross the ford in Croasdale Beck [a bit more water than I’d bargained for!] and down the Roman road into Slaidburn, arriving at the car just as it was getting dark. 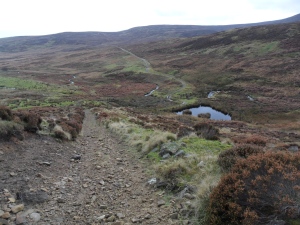 Will be back up here on the first decent day!

For further info and a downloadable guide see – https://bowlandclimber.wordpress.com/2014/02/24/bullstones-bouldering-guide/