It’s the weekend and we want to avoid the crowds. The forecast is still a bit mixed with cloud and possible showers so we are putting off our trip to climb high. Our last visit to the gorge of EL MARTELA was cut short so we decide to give it another go. On the way in we have a look at a smaller crag on the rim – but decide it wasn’t worth climbing. So down into the gorge with the sun still on the left hand routes. This warmed the rock and made the place feel a lot more friendly.

Rod started up a 20m buttress which gave continuously absorbing climbing at 5+  Likewise a similar rounded route on the other side. Two other climbers appeared and guess what – they were from Manchester! Finished the day with a couple of awkward 6a s led by Dave. The climbing here reminded us of Borrowdale with the volcanic rock and vegetation. 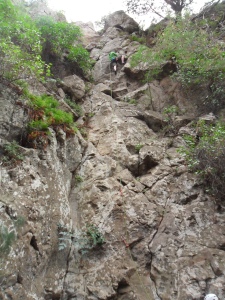 Well satisfied with the days climbing.

Sunday was a fantastic day, hot and sunny from the start. We therefore motored up the mountain to the climbing area  below Mt. Teide at 2000 metres. The scenery was spectacular with every form of volcanic feature and Mt. Teide [3,718m] brooding above us. On arrival we popped into The Parador hotel to enjoy a coffee on the sunny balcony. The white stuff on Teide is a pale ash  – not snow. Various map boards  showed long distance paths across and over the island – gave me some ideas for next year!!

The climbing  of CANADA DEL CAPRICHO was the first area developed for sport climbing on the island. The rocks are a labyrinth of weird shaped towers behind the Parador. The pyroclastic rock is much rougher than the other areas we had climbed on. Well made paths lead one up to the rocks and boulders.

Little paths wind in between the formations and we took some time to orientate ourselves. We were attracted to an obvious layback corner which we identified as  El Diedro del Clavo Rojo,  5+. This gave steep climbing up large flakes – classic easy laybacking.

The wall to the right gave a much harder 6a+ up  very steep hold-less rock – thank heavens for bolts. You can see it on the above photo if you click to zoom. This area was quite shady and cool in the morning and attracted other climbers including our Canadian friend. Moving out onto the south facing rocks we had difficulty locating  our next route in the maze. By now it was surprisingly hot considering the altitude and I was able to top up my Vitamin D levels whilst having lunch. Not a cloud in the sky.

We eventually decided on the last climb, a 30m 5+ Placa Kantosa. This went up rather broken rock to start with spaced bolts but finished on a white slab/block in a terrific position. All the while Mt. Teide acting as a backdrop. 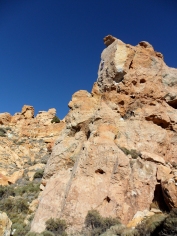 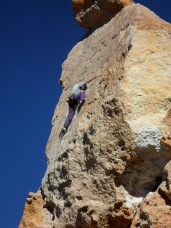 Ropes down and a pleasant walk back to the car in still warm conditions. On the drive down across the floor of the volcano and on twisty roads through the forests we had glimpses across the sea of La Gomera and Gran Canaria with their wreathes of white cloud.

The next day we fly home, but not till the evening so another short day’s climbing is possible. Because of it’s ease of access we chose Arico again, as do lots of others! It’s a very warm sunny day when we arrive. We had spotted a good line on the right on our last visit and walk straight to it. Unfortunately it is occupied by a group of 5 Spaniards who are top roping everyone up and down accompanied by much loud banter – they stay on it for hours – we retreat.

Climb a steep, pocked, sweaty wall typical of this gorge and find it hard work in the hot sun. Bypassing the happy Spaniards we discover a good looking line further up the gorge. This turns out to be one of the better routes we have done in the holidays. A steep groove leading to an awkward move round an overhang to land on the top slab – all great fun.

Crossing over into the shade we climb a rather poor route and decide to pack up for the day and enjoy the sunshine in the gorge with hawks flying overhead. Meet up with the Mancunians again, they seem to be enjoying themselves and have another week on the island.

We drive back to the hotel for a last swim before packing to leave. Have thoroughly enjoyed our stay on Tenerife – the climbing has been varied and relaxing. We have only really scratched the surface of what’s on offer, there are lots more crags to discover. Certainly would return for the settled weather of mid winter. 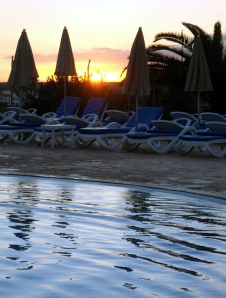 Guess what – it was raining in Manchester when we arrived home!

HAPPY XMAS AND GOOD CLIMBING:WALKING IN 2013!