One of my old time favourite short walks, when the tops are out of condition or when accompanied by young children, is the circuit of the Bleasdale Estate under Fairsnape. This provides walks of between 4 and 7 miles on mainly surfaced tracks – great for baby buggies!

Been cooped up the last three of weeks  with a tight chest brought on by one of those winter bugs – visits to doctors and hospital make you feel your age! Meanwhile we’ve had some snow, not much, but it looks good. Trips to the climbing walls have been hard work as I was out of breath most of the time. So today when the sun shone I decided on the fresh air cure.

Parked up near the start of the private road into Bleasdale. There used to be a post office and cafe here not that many years ago, its gone now and all that’s left is a post box and an old telephone box. Didn’t check if it still had a phone!

Despite the loss of it’s PO the scattered farming community of Bleasdale still has a primary school, church and a parish hall. These are all accessed by the road I’m walking up. First is the C of E school built in 1850 and since extended.

Opposite is the parish hall and further up the lane is the church dedicated to the unusual St. Eadmer. There has been a church on this site since 1577 and services are still provided by the Fellside Team Ministry. 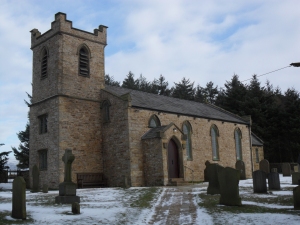 But the most important historical vestige of the area is the Bleasdale Circle. This is reached by concessionary field paths opposite Vicarage Farm and is seen as a clump of trees on the fellside. The circle[s] are bronze age and were originally oak posts, an outer and inner ring. Discovered in 1898 and subsequently excavated they yielded a central burial chamber with cremation urns and ashes. These are now on display in the Harris Museum in Preston. The inner ring of wooden posts have been replaced with concrete posts. The orientation of the posts within the circle of the Bleasdale hills may suggest some deep reason for their sighting here.  I doubt we will never know. 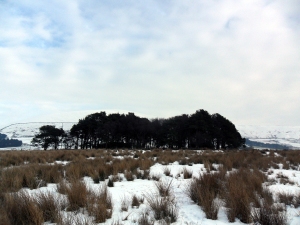 Continuing up the icy track into the heart of the fells was a test for my newly purchased ‘Magic Spikers’. These strap on spikes are designed to prevent slipping on icy surfaces and were bought on impulse yesterday. Have been meaning to get some following a life and death crossing of a frozen Pyrenees  a couple of years ago [crampons would have been better] – only a little extra traction makes all the difference. At first use not sure about there effectiveness as the spikes are only at the front. But when I removed one from my right boot I soon realised what a difference they had being making in terms of not slipping. Will certainly use again if we have icy conditions on our pavements and roads. They are easily fitted over boots or shoes.Other makes are available.

Walked through several isolated farm yards on the estate roads, always with the background of the wintry Bowland fells and good views up to the evocatively named Fiendsdale Head.

Now approaching the extensive buildings of Bleasdale Tower estate, these appear to be totally dedicated at the ‘sport’ of shooting, all well maintained. They advertise activity days, at a price, revolving round the hunting theme. There is a choice here of a quick return via the packhorse bridge, Brooks Bridge, but as the day was fine decided to continue on past Bleasdale Tower residence itself on the estate road. There is an old GR post box in the wall here.

Continuing past Fell End and onto the Delph Lane [there are lots of little quarries on this lane  – hence the name]. The Views out to the Fylde were masked by haze. As I walked down the lane I noticed a gate on the left which gave access to a previously unknown permissive bridleway through the fields to Broadgate Farm with good views to Parlick and Fairsnape. The farm lane brought me onto Bleasdale Lane for a brisk stroll back to my car. This goes alongside the best maintained beech hedge I know. 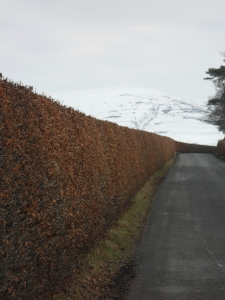