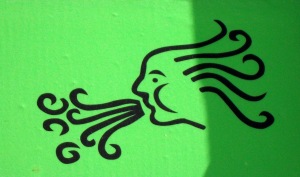 Breakfast was at the Catalan time of 9am. David was going out to his fields first and would be back later to take me back up to the coll. Perfect sunny morning for breakfast on the terrace! 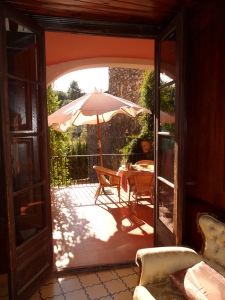 Leaving the road I was glad to be underway at 11am. 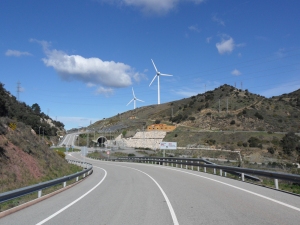 It was a very windy morning but I was sheltered from the worst by the Serra del Pradell hillside I was traversing under. The hillside consisted of a lower red sandstone conglomerate topped by the limestone escarpment. 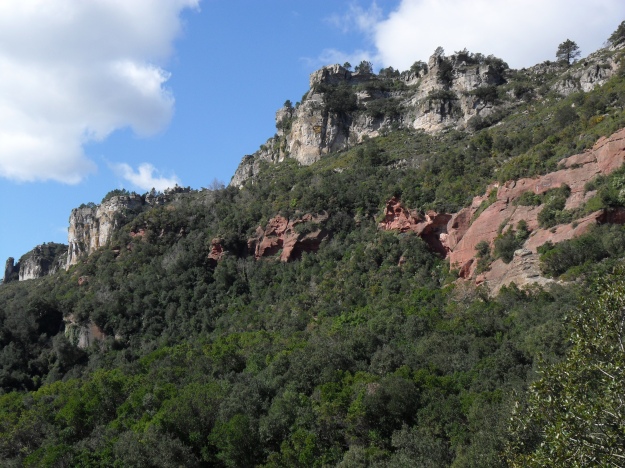 The track, lined with gorse, rosemary and tree heathers, dropped into a village, l’Argentera. Small place but a few people about and I arrived at the bar just as it was opening for my Morning coffee! From here I had to climb back up onto the ridge passing abandoned mines – silver – hence the name of the village. As I gained height there were views back over l’Argentera to Reus and the coast. 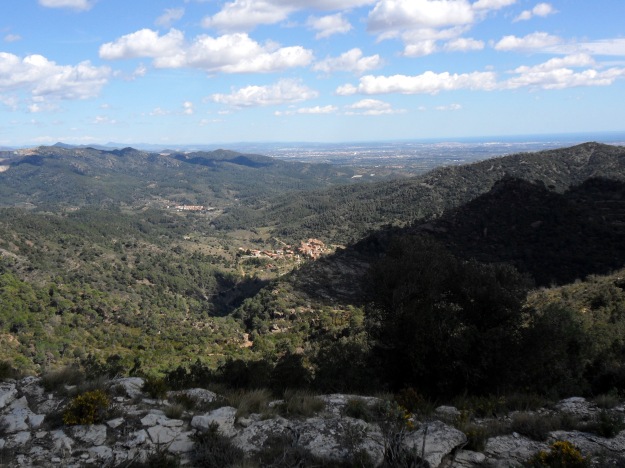 On the ridge, Serra de l’Argentera, was the largest wind farm I’ve seen. The original trail across the ridge had been disturbed by the road for the turbines so it was easiest to use the latter. There was a constant whirring noise and I had visions of one of the blades detaching itself and decapitating me. 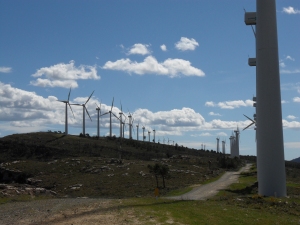 The wind was gale force making walking difficult but interestingly the turbines turned at the same speed as in yesterday’s breeze, must have some regulating system to stop the bearings burning out. A white pickup passed me on the top, checking on the turbines. I was feeling rather battered as the road wound down to meet a public road at a col under the Mola hill 859m and to its left I could see a ‘golfball’ communications installment on the hill behind La Miranda 919m. 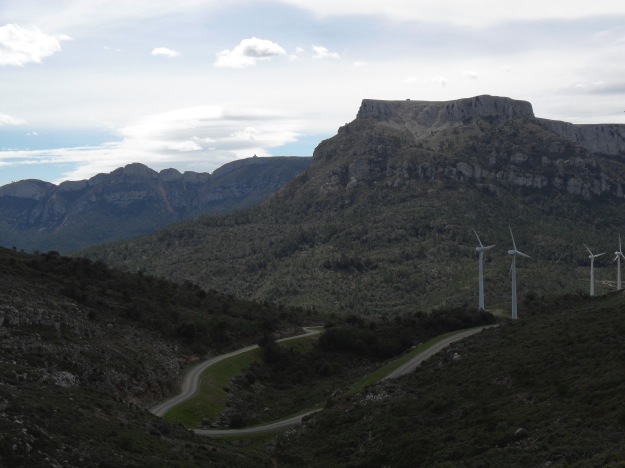 Leading off the road an old path wound down to Colldejou where everything was shut at 3pm. There is no accommodation here, so I was hoping for a bar from where I could arrange some transport down to the town of Mont-roig. Decided to hitch down but very little traffic about. Had just got onto the road when the white pickup appeared and stopped for me. The turbine worker was going home to Reus via Mont-roig – perfect. He explained about the turbines and said there were 200 under his remit. He dropped me off at an hotel in Mont-roig, this is where he leaves the works van and goes home in his own car. He did say he would be going back up the 10k in the morning about 6.30 – sounds rather early. First things first was to book in at the  hotel, a modern building run by a delightful couple. The room was fine and there was a lounge with drink making facilities. However I went out to the cafe round the corner for a coffee and ordered a tortilla bocadillo for tomorrows lunch. Asked about taxis to Colldejou and was quoted 20euro so thought I would probably get up early and catch my lift. Tomorrow was a long day’s walk anyhow so an early start wouldn’t go wrong. Came back out to the bar in the evening for a beer and a ‘plato combinado’ which was very filling for 5euros.These are never high cuisine but always good value when walking. 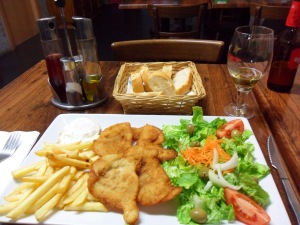 Told the hotel I would be leaving early and was in bed by 10.