Again a dull morning but enlivened by a great breakfast served by the lad who is a highland marathon champion. I bet he has porridge. Off again along the railway and soon into a gull colony where we attacked by the BIRDS.

For a couple of miles it was easy going on the old track but then suddenly we were faced with steep ascents into the forest. With the mist down the woods took on an aerie atmosphere.

The undulating route took us out of the woods and up onto a ridge which would have given us views back to the Cairngorms if it had been clear. We met a man going in the opposite direction who was 77 and recovering from a hip replacement – impressive.    The ground was rather difficult being boggy and bouldery  so we made slow progress.

The days walk was characterized by the style of stile on route. A sort of squeeze stile updated into a springing metal trap. Must have passed through a hundred of these today.

We were often fenced in by barbed wire, to separate us from the cattle, but it was not a good walking experience. 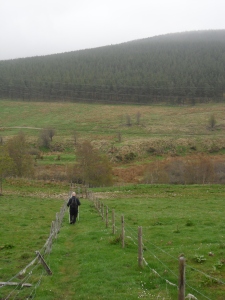 The woods we traveled through were heavily encrusted with lichens which gave an added aspect to the scenery.

Eventually we dropped down to the old railway  by the Spey for the last couple of miles to our Ballindalloch B&B – Cragganmore House. this large house had been the property of the founder of the close by Distillery back in the 1860s. the present owners have furnished in a period style making it popular with visiting tourists. 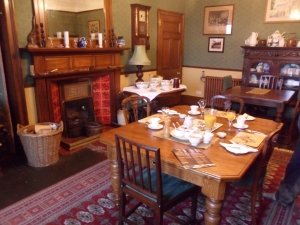 We thought the £32 evening meal a little pricey so survived on cup-a-soups and biscuits in our room. Very peaceful night in the middle of nowhere.