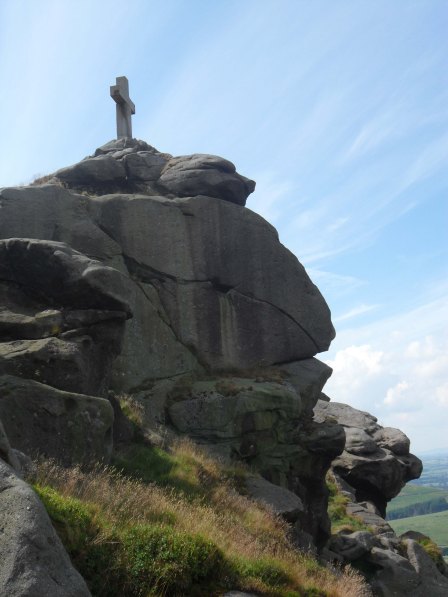 I first visited this series of gritstone crags in the early seventies when I moved back up north. At the time my regular climbing partner lived in Hellifield, hence our frequent visits here as well as Eastby, Deer Gallows and Crookrise. He was running an outside catering business from his premises. Quite often on a Sunday morning, when I arrived to pick him up, he was just loading up his ovens with tens of pounds of best beef to be roasted ready for Mondays sandwiches. He seemed happy just to pop the ovens onto low and leave them for the day, confident the beef would be cooked on his return. I was far more worried throughout the day about the possible burnt offering we might return to.

In those days our gear was fairly rudimentary, nuts and slings – belay plates had just appeared. We were climbing mainly easy slabs, corners and cracks. Here on Rylstone there was an abundance of parallel sided horizontal and vertical cracks. We would spend a lot of time trying to safely seat our hexagonal chocks into these cracks for protection. The two most popular easy climbs at the time were Presidents Slab HD  60ft  [1922] and Dental Slab S [1935] both given three stars for quality. I recollect we were virtually soloing them with the poor gear of the time. Towards the end of the seventies the revolutionary camming devices appeared – Friends.  I rushed out to buy  sizes one and a half and  two and a half and then rushed up to Rylstone to try them! Fantastic. Friends worked better and faster than any other device. Not everyone embraced this revolution, some climbers denounced them as unethical, saying they made climbing too easy. I never complained. Have searched for some old climbing pictures of the era but without success.

One other recollection from those days was having a post climb pint in The Angel Inn at nearby Hetton hamlet. It was a basic, friendly, village pub. Nowadays it has become an upmarket gastro pub/restaurant, I’m not sure whether dirty, scruffy, gritstone climbers would fit in.

Fast forward to the present and I found myself walking up to Rylstone this Friday. The weather as you know has been oppressively hot but things are just cooling down. Rylstone facing west and high on the moor can be a cold windy place. Perfect for today’s conditions. I hadn’t been doing routes recently [toe pain] so the chance of some single pitch classics dragged me out with my mates. The walk in seemed longer than I remember and we were sweating when we arrived at the rocks bearing the cross. The present cross is stone and was erected in 1995. I have memories of the previous cross being made of wood, didn’t know what it commemorated but I think it kept being struck by lightning.

First route of the day was Presidents Slab which I led trying to avoid using ‘Friends’  – great easy route. Next of course was Dental Slab, for the origin of the name look up at the top toothed finish. Said to be the best Severe in Yorkshire. If only it went on a lot longer. Click photos to enlarge for detail . 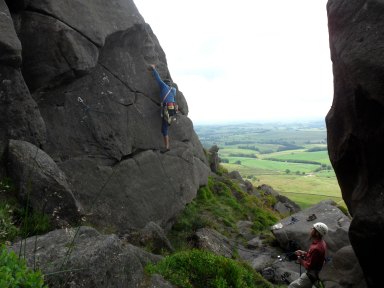 … and finish at the teeth.

A few shorter slabby routes and then we moved to the lower tier for the sustained Rylstone Wall VS 4c. Satisfying route. 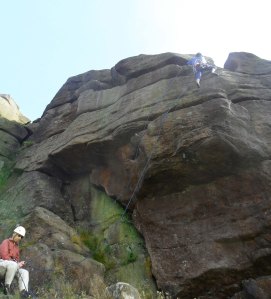 A chatty walk back to the car just as the after work climbers were rushing up for a few routes in the perfect evening conditions.

As they say in Yorkshire – God’s own rock.