Having stayed an extra night in Florac we were able to enjoy another buffet breakfast at the Grand Hotel. H had a near miss with what he thought was a hard boiled egg – he was just about to crack it when I asked him how long he had boiled it for. He had not realised that you boiled your own in the heated container – that raw egg could have been messy.

We wandered across the bridge to catch the same bus as yesterday, stood around awhile until a man approached us and enquired whether we wanted the bus which was about to leave. This time it was white and from a different place – could easily have been stranded, however we were soon back at Cassagnas Gare. The difference is that it is tossing it down today.

Now I’m not one for walking too far in the rain when there is no visibility so I suggested we keep to the road up to the Plan de Fontmort for easier walking and the remote possibility of a lift. No sooner than we had made this decision than a friendly carpenter in a van picked us up for the what seemed like an endless three kilometre ride to the Plan. Thank you!                                         The heavy rain stopped on our arrival. Here there is a monument to the protestant bloody resistance against the catholic majority in the 17th century.

Forest tracks passed old gariottes on the way and several standing stones suggesting the antiquity of the route.

At the Col de la Pierre Plantee we paused for a snack next to a standing stone. Downhill now to reach the village of St. Germain de Calberte. Here another monument emphasises the local protestant strength. 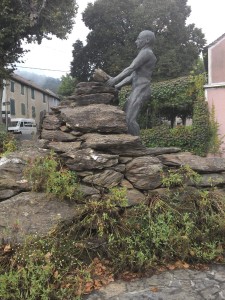 By the wayside is an old military jeep.

Most of the village was closed but we found an aging bar terrace with a man serving slow coffee. the sit down was welcome. Other walkers passed us by.

A rather lengthy session in the chestnut forest high above the valley passing renovated holiday homes eventually deposited us onto a valley road. We had booked at Mas Stevenson gite but had no idea where it was. However after a couple of kilometres of road walking a van drew up alongside me and the man asked if we were the Englishmen who were staying at his gite. ‘My old man said follow the van’

The Gite Mas Stevenson turned out to be the best of the trip. An old renovated farmhouse with a modern dining extension and good modern bunk rooms. A party of horse riders shared the accommodation tonight. The couple running the place could not have been friendlier, they cultivated Crocus bulbs for saffron and bees for honey. The wet summer had not been kind to them in either respect.   The communal supper served by our hosts with the chatty Cavaliers was a great experience.  French beans and beetroot, barbecued chicken and potato Dauphinoise and local cheeses. Perfect.