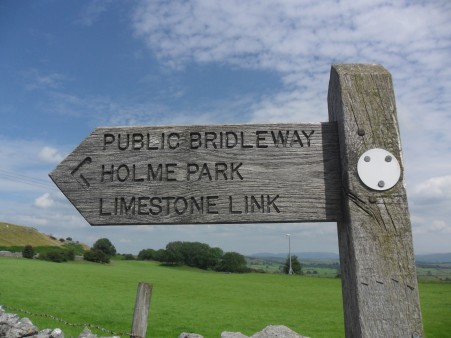 The Limestone Link [LL] is a 13mile walk between Arnside and Kirkby Lonsdale. The plan involved two cars, I met The Rockman and The Teacher already parked up at Arnside and then drove us in my car to Kirkby Lonsdale. This meant we had lots of last-minute decisions to make ensuring all gear and essentials were in the right car at the right time and place, not easy for our blurred minds first thing. We had the 1:25000 map marked with the route for the west end but not for the east, One of our party suggested we wouldn’t need the latter as the route would be well waymarked but last evening I spent a bit of time on the computer and printed out a segment around Kirkby.

There was ample free parking at the popular Devil’s Bridge, our staring point. As we arrived we were swamped by hundreds of teenagers, admittedly well behaved and friendly, all going for a walk – surely not the Limestone Link!  A teacher informed us, as 800 marched past, that it was their annual charity 20k walk fortunately in the other direction over the Barbon Fells. Hope they had a good day, the weather was perfect for us all.

As calm descended we had time for coffee and a look over the bridge at the attractive River Lune flowing over limestone slabs.

We thought it strange there were no LL signs or markers to be seen as we left the bridge across a park. Within a few yards The Teacher realised his boots weren’t comfy as he had forgotten the insoles, back to the car to change into trainers, fortunately taken. Quickly climbing into fields on vague paths we were soon clustered round my little piece of inadequate photocopy. The ‘route’ seemed to be following a limestone ridge so we just kept to that as much as possible, we knew we were heading to Hutton Roof.  Behind us Ingleborough stood proud as usual, ahead was more gentle rolling countryside. 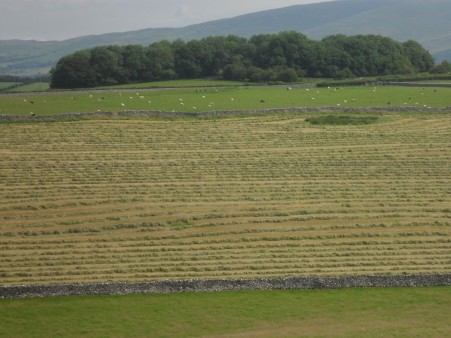 A couple of diversions to avoid hay being cut and a bull saw us walking up the surprisingly steep lane into Hutton Roof. I was more familiar with the territory here as this was once a regular spot to come bouldering on the limestone outcrops up the hill. But the paths were overgrown with bracken and my memory faded, out came the real map and even the compass for onward progress. Have to admit it was delightful, once out of the bracken, on the flower-strewn limestone with views back over the outcrop towards Ingleborough. Northerly views to the Lakes etc were rather poor in the heat haze. A good spot for a snack.

A winding track through shrubs led on down to a lane below Holme Fell where we came across a LL sign, the first evidence we were on the correct route. Perversely within a hundred yards or so we were lost in a profusion of paths mostly going up Holme Fell, more clustering around the map and compass had us back on track over the side of the fell down the bridleway to the road. Looking back to the right was Farleton Fell another regular bouldering area from the past, we were surprised to see how far it appeared from the road. We were now in a sort of no-mans-land of M6, Railway and A6 between the limestone uplands.

We were glad to escape from an unpleasant loop on a busy road onto the tranquil canal side. 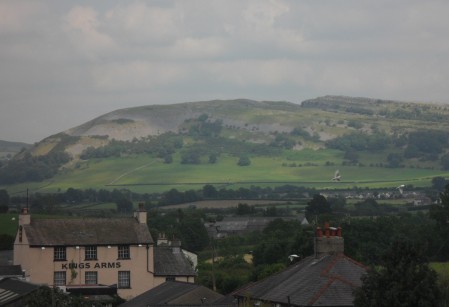 Navigated safely through the surprisingly extensive village of Holme and onwards to Hale. Here things improved as we entered the limestone woods at Slack Head [our second LL signpost!]. There were unmarked footpaths everywhere through this delightful maze, at times directly on the bare limestone pavement.

Little country lanes were crossed and eventually we found ourselves at the top of The Fairy Steps. Stopping for a drink we watched as walkers disappeared, laughing and grunting, into the cleft. If you don’t touch the sides you may see a Fairy and have a wish, I think you would have to be a fairy not to touch the sides. Yet another area from previous bouldering trips to reminisce over – we do a lot of reminiscing!

Down a rocky path to Hazelslack with its late 14thC Pele tower to ward off the Scots.

A few more map readings and we were into Arnside and enjoying a pint at the pub overlooking the Lune and its viaduct. Coincidentally bumped into my old friend Conrad  [http://conradwalks.blogspot.co.uk/] family and friends, they had just returned from their regular Thursday walk.

So the LImestone Link has provided us with a lovely social day’s walk over interesting terrain and with wide-ranging views. It can be done in trainers! The road walking near Holme could have been avoided by a traverse of Farleton Fell and more canal walking. As a whole it doesn’t seem to be well used, particularly in the East and there is an almost total lack of any signing or way-marking. No big problem but thank God we took a map.

2 thoughts on “THREE MEN AND A MAP – The Limestone Link.”