The morning dawns bright with mist hanging in the valleys – a perfect start. The time given for today is 3-4 hours but we have been warned that this is hard to match, particularly for us old timers. Despite that we are the last away from the hut. 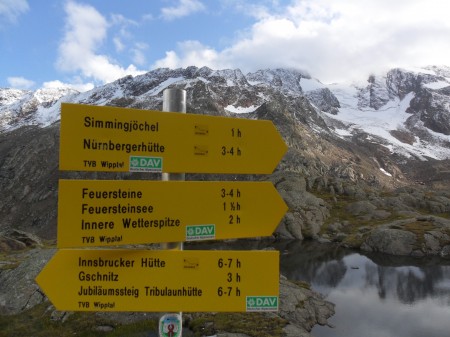 Typical yellow signs with the Feuerstein behind.

I had set off on this trip with both heels badly blistered but now well plastered and causing no trouble, after a kilometre or so the rockman  felt his heel rubbing and when we investigated there was the inevitable. So that was the two of us plastered up. Climbing up to the pass we spotted a small group of Steinbock  [Ibex] and were able to get very close to the male who was grazing and at times scratching himself with those massive horns. Quite a sight, don’t think I have been so close to one before and he seemed totally unphased by our presence..

Pulling ourselves away we scrambled up fixed gear to the col, notice the foot staples in the rock as well as the wire. A different mentality to Britain.

At the col was a  tiny locked hut used by the border police!

We had a grandstand view of the glaciers below the Feuerstein and Wilder Freiger and in the distance our hut for tonight. 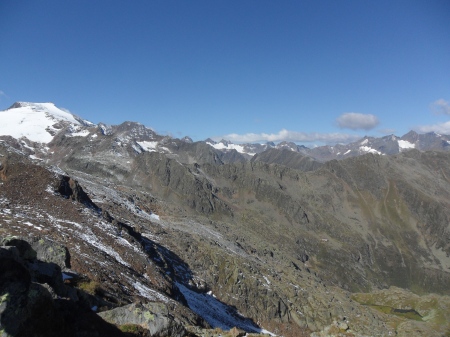 Everything was very icy up here and the view down the steep northern side with fresh snow didn’t look inviting. This is often the case – you romp up the sunny south side only to be stopped in your tracks by the shaded icy north side. Fortunately, although exciting, it wasn’t as bad as imagined and we were soon onto a cabled buttress and then an endless rough boulder field.

The glaciated cirque was a pleasant interlude….

… to eventually cross planks over the river below the Nuernburger Hut. The route had a sting in its tail as we climbed steep bands of rock.

The Nuernburger Hut was a substantial four storied building with great rooms and antique features. Many of the huts in this region are owned by the German Alpine Club [DAV] and reflect its  wealth before the first world war. 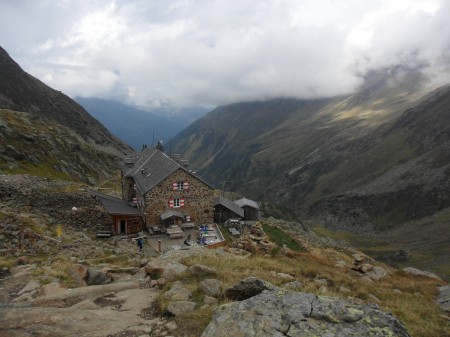 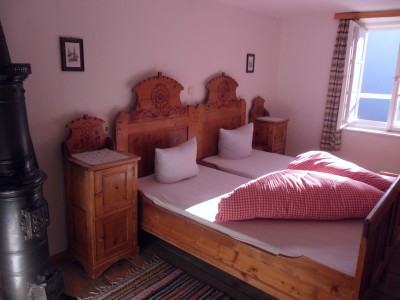 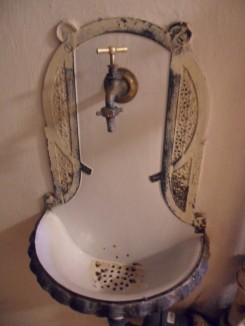 The staff were super friendly and we ordered the ‘super’ bergsteigeressen which proved to much to eat, noodle soup, salad, two spinach and one cheese dumpling and pudding, but it did come with a free schnapps.