My friend the ‘pieman’ has lived in Skipton most of his life and  surprisingly never knowingly  been up to the top of this moor directly above the town.

Judging from the paths plenty of Skipton’s citizens do make the effort. We were able to walk from his front doorstep, after he and his wife had replenished my caffeine levels. This is always a busy town and today was market day. We found our way to the unpretentious  street leading up onto the moor and nearing its end were surprised  to see an old toll house, looking at the map we realised the lane had been the original way over to Addingham.

Where the houses end the tarmac reverted to cobbles and the track signed as A Dales High Way,  a 90 miles walk from Saltaire to Appleby  I’ve just read. This long distance path may be worth looking into.  A passerby told us to look out for Green and Greater Spotted Woodpeckers in the woods above.

The bridleway soon gained height and worked its way across the western slopes of the moor, after about a mile we struck uphill to the summit.

A trig point 373m, substantial cairns at the Eastern End and a recent narrow unstable looking one at the Western end. The views were surprisingly good with Skipton laid out below, Sharp Haw and Flasby Fell are prominent and there are distant views of Ribblesdale and Cravendale. Of interest to us was the view across to Embsay Moor which boasts several climbing venues  – Eastby, Deer Gallows and Crookrise all old haunts of ours. 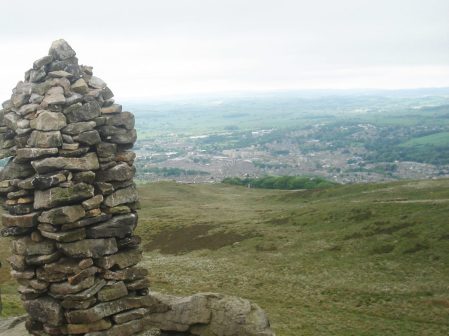 A hazy Skipton below.

Despite the weather being sunny and warm in the west it was dull and cold up here, hence the hazy photos, so we didn’t linger. Having to climb some walls we were back on the bridleway, Dales High Way, for easy going. Just about lunch time an inscribed seat appeared, we postulated its origins over sandwiches. 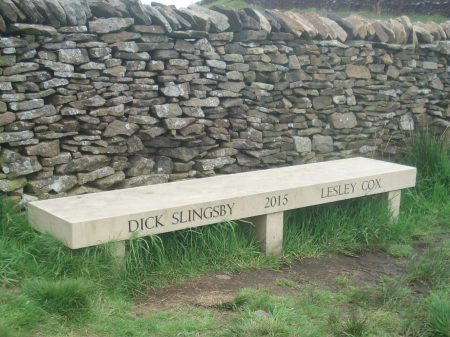 At a lane there was an old finger post giving miles to 1mile to Draughton and 3miles to Silsden.

To complete the circuit we followed field paths between farms, mainly  converted into  modern dwellings, one with aggressive guard geese.

A rocky subsidiary ridge was reached and this gave us easy walking back towards Skipton with views all the way. Before we knew it we had joined the bustle on the High Street. What a great little circuit which would be perfect for a summer’s evening stroll.

Spotted on the way back to Skipton, a Triumph Herald similar to one of my first cars. 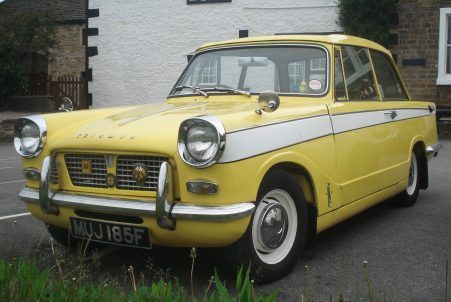