Deganwy to Rhos.  Round the Great Orme and over the Little.

Well for the first hour or so that was the case and I was soaking by the time I stopped for a rest and was thankful for a coffee in the cafe. 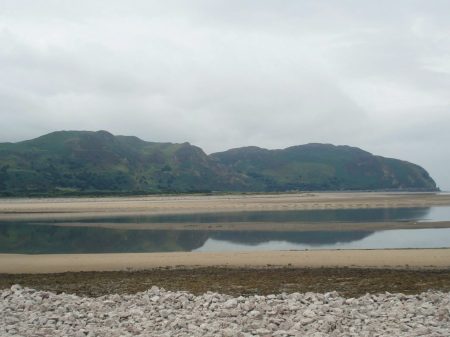 Conway Mountain seen across the estuary before the rain. 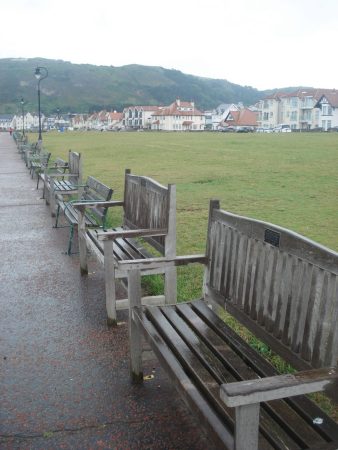 Llandudno West beach – how many memorial seats do you need? 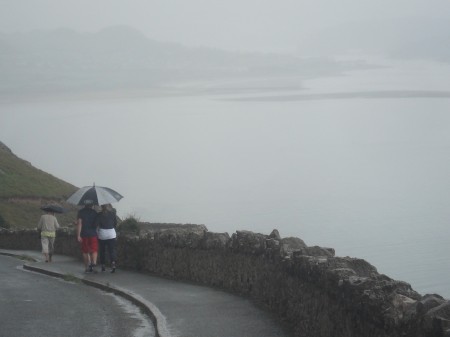 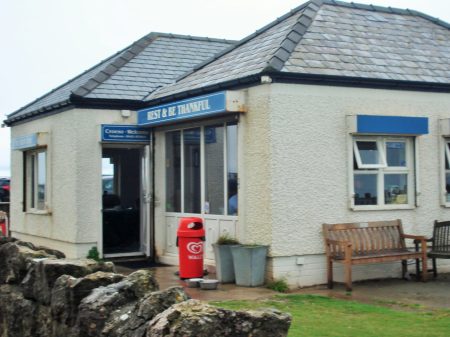 When I reappeared the rain had stopped for the day so I started to enjoy myself and see the surroundings. Limestone cliffs above and below, I was searching out climbing lines and spotting mountain goats. Eventually found both. 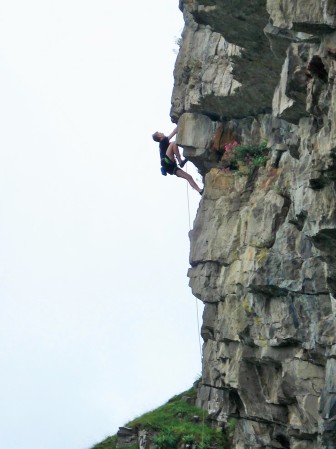 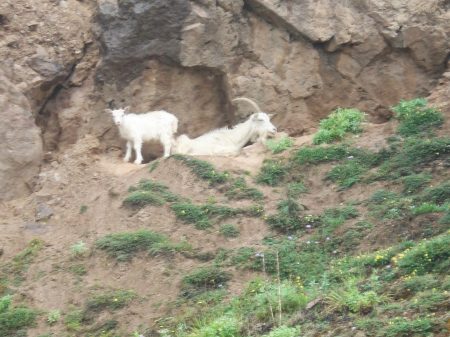 Near the end/beginning of the road there is a cave called Parisella’s [named after an ice cream parlour] where hard hard bouldering problems abound and always dry! It must be nice to be good enough to be sponsored. 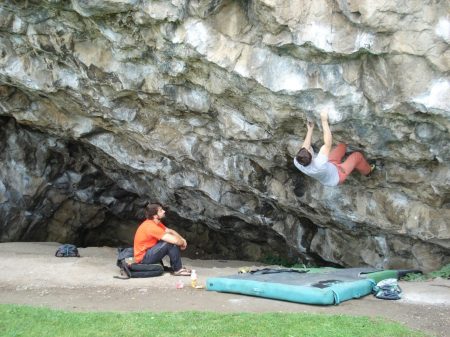 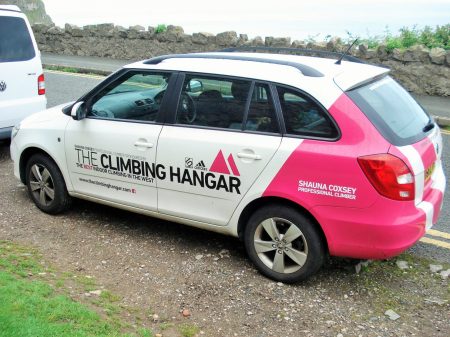 I digress. Now for some history … 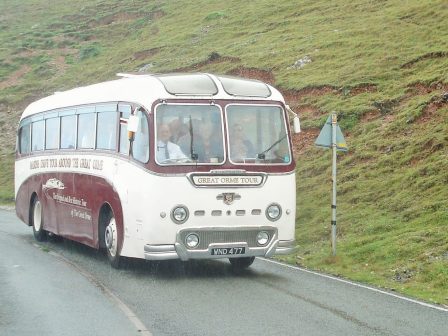 The pier is next to the fading Grand Hotel but the rest of Llandudno is thriving, ‘No Vacancy’ signs everywhere. 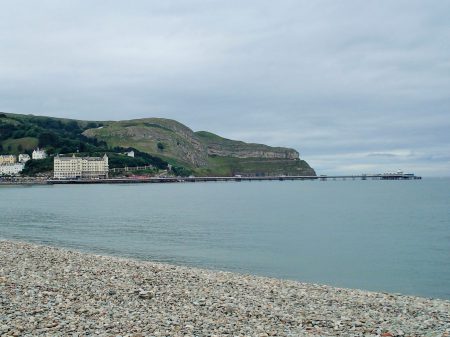 It was busy on the prom… 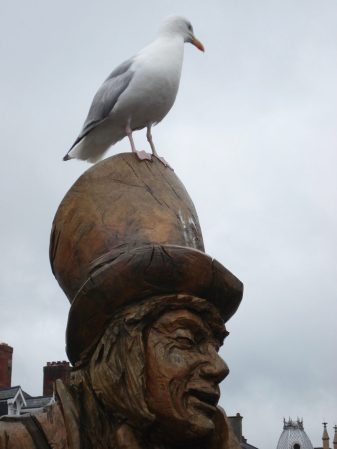 … my best advice is to catch a bus to Little Orme.

For some reason the North Wales Path misses out the summit of Little Orme, a great mistake. It was one of the best viewpoints yet. 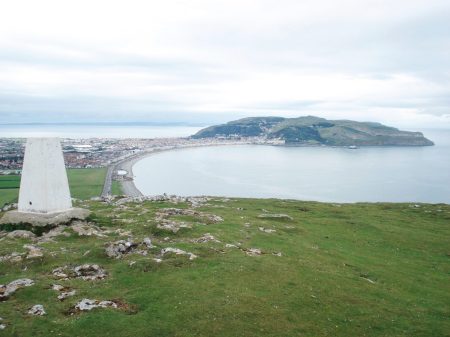 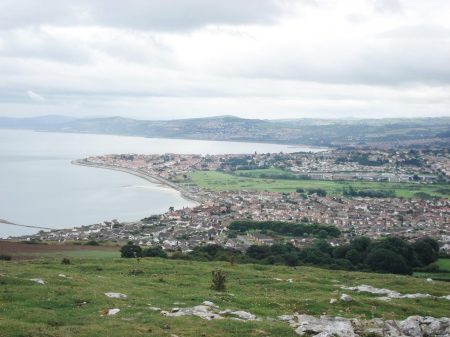 There was only another lady and her daughter [locals] up here and they were lost and panicking, I walked down with them. The 5yr old asked where I had been in the world so I queried where she would like to go –  Abergele was high on her horizon! I had other random conversations today – a couple on the beach told me they were searching for the perfect sea-washed stick for a perch for their pet gecko – a man fishing for mackerel off the beach but waiting for high tide 4hours hence [why didn’t he start later?] – another fisherman hoping to go out later for sea-trout, he always wanted to fish the Hodder near my home.

I managed to get lost also in a mining area on the edge of the mountain, till the salmon fisherman showed me the steep way down, which was in fact signed, the post top left. 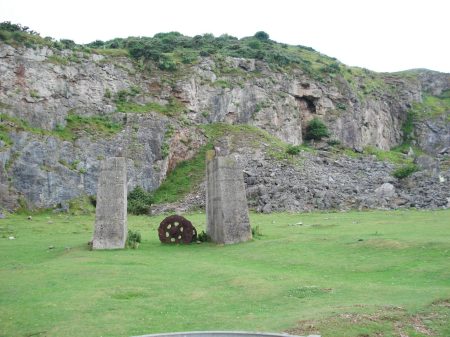 Ended the day back on the prom at Rhos on Sea where I found the delightful St Trillo’s Chapel. its altar stands over a spring and was established in the 6th C but has been rebuilt many times. Services are still held for a congregation of six. 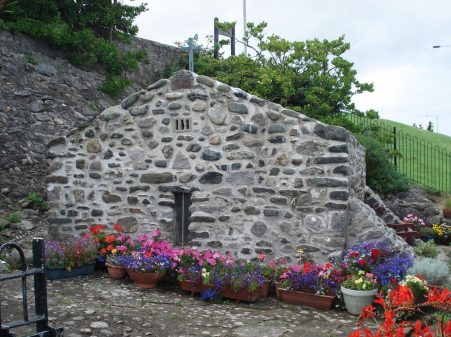 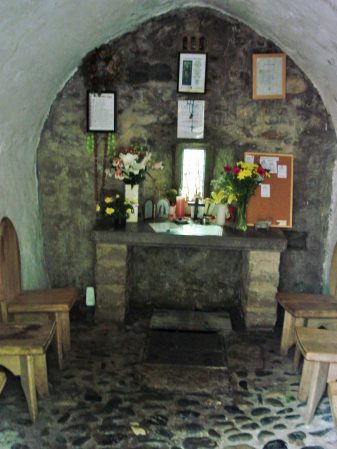 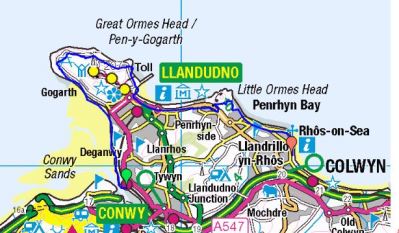