Westward Ho! was a novel written in 1855 by Charles Kingsley featuring the port of Bideford in a seafaring adventure. When a town was being developed on this part of the coast a few years later it was thought that linking it with the novel would help promote tourism. Hence the name and the exclamation mark. I remember an area in the NE that started putting up signs ‘Catherine Cookson Country’ for tourism, I felt that it was inappropriate at the time and I don’t know if they are still there. At least they didn’t christen any new town or village with the moniker. Anyhow today I heading appropriately west.

Again it was raining heavily so I lingered over my superb breakfast and talked amongst other things of travel and carpets with my hostess, she had once imported oriental rugs and the house is still full of them. Eventually I had to leave as my schedule was tight today with a train to catch home later. The streets of Appledore still looked attractive in the wet but on the quayside the tide was out exposing a lot of mud. 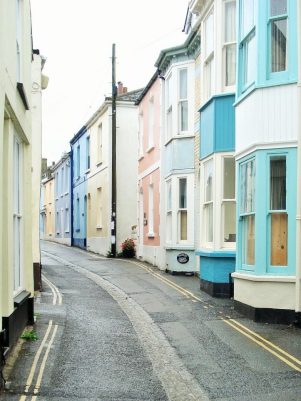 Lanes out of Appledore brought me to the entrance to Northam Burrows Park, a few cars were driving to the car park.  It was not pleasant with mist, wind and rain. but they were mainly dog walkers with a routine. The dunes of Saunton and the Croyde headland could just be made out. 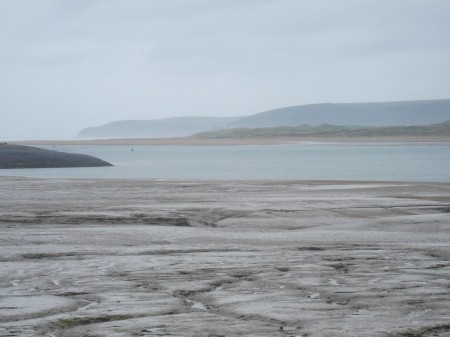 I short cut across the dunes towards the point, one minute I was on rough ground the next on a perfectly manicured golf course which I had not recognised in the conditions, fortunately those same conditions were too bad for golfers and I scuttled off towards the sea.

A sandy path of sorts above the beach sufficed to bring me to the remarkable black pebble bar which stretches down to Westward Ho! There was not much to delay me and I was soon on the road and catching a bus to Barnstaple for my onward journey home. 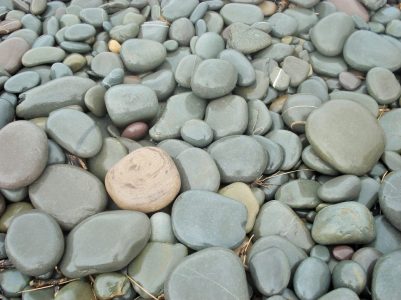 It will be awhile before I return and head towards Lands End, shall miss the salty air and the friendly soft Devon lilt. 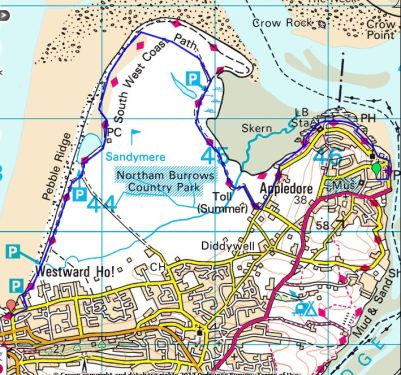