Calder Vale is a hidden village tucked away from the world to the east of the Bowland Fells. Quakers Jonathan & Richard Jackson founded Calder Vale realising the River Calder would provide water power and in 1835 the Lappet mill was built to spin cotton. At the same time, they provided for their workers and their families by building houses on site. A further mill was built downstream for weaving the fabrics. Most of the mills have long since closed but the Lappet mill has survived by specialising in the production of Arab head shawls!  Those red or blue and white shemaghs for protection from the sun as well as windblown sand.   Time for a revisit.

I waited this morning for the mist to disperse, and I waited. By 12am I decided to set off hoping the sun would appear as promised. I am not far away as the crow flies but the lanes in this area are a maze. Eventually, I found a parking place by Sandholme Bridge on the Calder. I wanted to walk into Calder Vale from above to fully appreciate its position. The quiet lane rose up above the river heading towards the Bowland Hills [which were in the cloud]. I was directed off the lane towards Cobble Hay Farm, a working farm that also hosts a popular cafe and gardens. Guess what? it has been closed all winter but is reopening tomorrow, so no coffee today. The original farm is dated 1681. 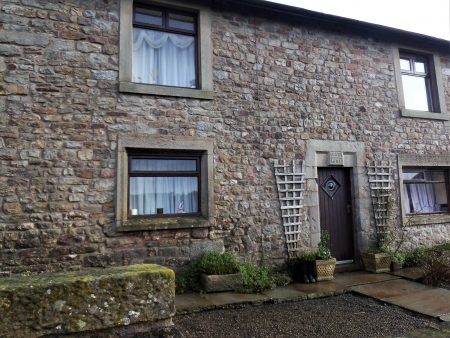 Once through the farm, one is onto open pastureland which today was a quagmire and I was concerned about becoming stuck as my boots sank further and further into the mud. Up above a couple of buzzards were wheeling around and crying. I approached the next farm cautiously thinking there may be dogs at loose but I was greeted by this friendly face. 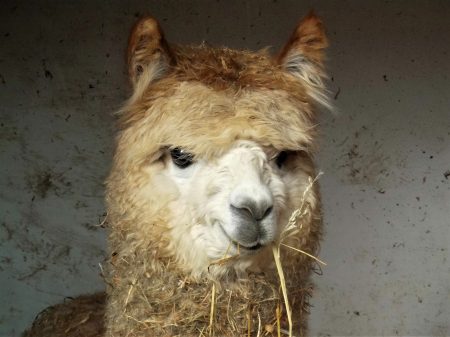 I’m now on the edge of the Bleasdale Fells [Bowland], there used to be a pub up here, The Moorcock, now closed and a private house. I was aiming for the little St John’s Church,1863. the parish church high above the village.  It was closed today but apparently has some fine stained glass. Next to it is the little village school serving a wider area than just Calder Vale, I wonder how many children walk up from the valley each morning.

I reversed their route through the woods to meet up with the River Calder down below.

A pleasant stretch alongside the lively water brought me to a weir where water was taken off to a large millpond which previously supplied the Lappet mill. The mill is no longer water-powered but it is interesting to follow the original leats. 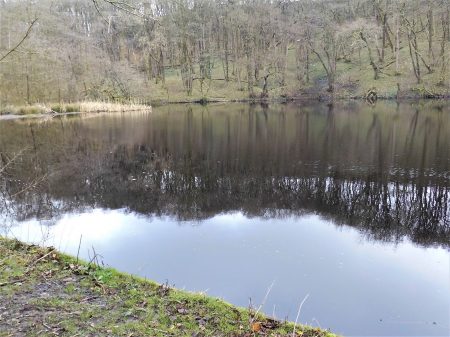 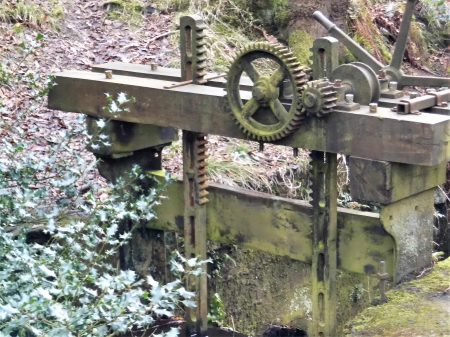 Now deep in the valley, the first row of Calder Vale workers cottages are passed and how delightful they look today but car parking is obviously a modern-day problem. [heading photo]

The Lappet Mill is massive and the sounds of weaving can be heard outside. Let’s hope the demand for headscarves continues.

Just past the mill is an old farmhouse, a sheepdog rushes out to greet me. The farmer appeared and we had a long chat on all things rural, meanwhile, the dog rounded up all the hens in the yard – showing off said the farmer.

More cottages were reached over a footbridge. Alongside the river, there was very little sign of the lower mill, only a few stones and water channels here and there. 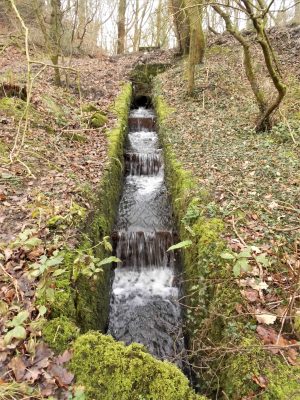 The track climbed out of the valley and crossed fields to a country lane. A man was practising with a parapente on an easy slope, he never got off the ground.

Once on the road, I walked quickly back to the car with the weak sun in the west and the rumble from the motorway becoming intrusive. I stopped to buy half a dozen farm eggs towards my tea. 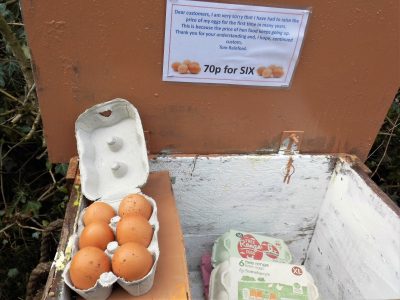