I had a short day ahead of me, achieved by splitting a long day into two and by staying on a camp site this coming night. There was a lot to see in Bocairent so after breakfast set off to explore. Narrow medieval streets and steps, gateways, fountains, unique bullring, gardens all featured on a marked walk around the town. But there are also two important sites  across the valley outside the town. On a rocky hilltop at 750m is the 16th century Chapel of Santo Cristo reached from a bridge below the town by the winding ‘Stations of the cross’ path.

Too soon after breakfast to tramp up there.

Instead I was more interested in Covetes dels Moros a series of caves and windows carved into a rock face as seen in the heading photo. [don’t forget to click to enlarge] I arrived at the steps down to the ravine only to find them closed off today – Monday. As are most other things in Spain on a Monday! Undeterred I made my way over the barrier and up to the rock face for a closer view. 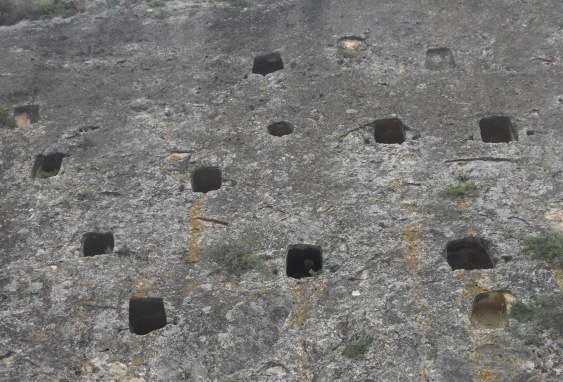 There are 53 windows and ‘rooms’.  Their origin seems to be obscure and they are difficult to date [?11thcentury]. Their purpose also is only speculated at – granaries, monastery or funeral chambers are suggested. Obviously today I couldn’t gain access. Will have to be content with  —  http://www.youtube.com/watch?v=Xi7A8MSLwwY

Back up to the square for a coffee and bocadillo before setting off towards the Sierra De Mariola to the south. The GR7 seems to take a circuitous route on roads but on the map there seemed to be an old way up to Ermito St. Jaume. And so it proved – a lovely, obviously ancient, winding path gradually gaining height through the trees and limestone bluffs. I was quite pleased with my find.

Came out onto the  high plateau of Mariola, rejoined the GR7 and strolled along to Ermita de Santa Barbara. Here there was a fountain of good water, Font de Pla, and an amazingly old black poplar tree propped up by masonry.

The hermitage was extensive and ornately decorated with a little chapel at one end. Lovely place for a break and an orange. 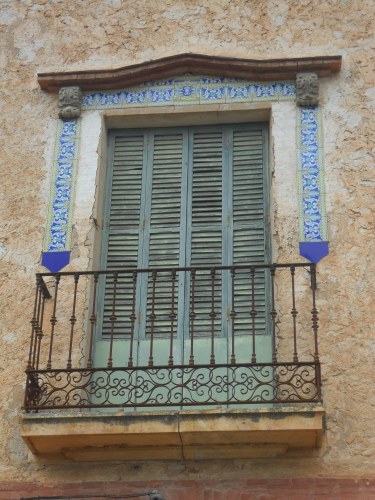 The path now passed through a forest of oak and pines undulating along the Sierra De Mariola at just under the 1000m mark. The sun continued to shine and keep up the temperature. There was a touch of autumn colour appearing. 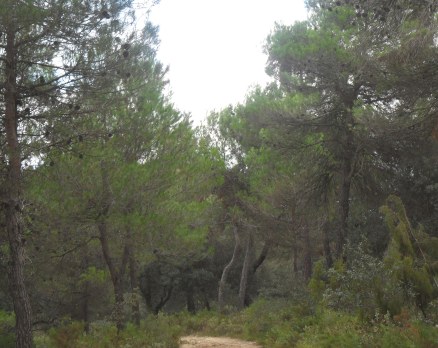 My lodging for the night was not the best but there was a half decent shop; so I ate well and then slept warm under a clear starry night.