A very peaceful night in the cottage and breakfast without the dogs. We never seem to get away much before 9.30am but the day is not arduous and we have time to explore. The waymarking has been so good we have hardly had to consult map or guide. 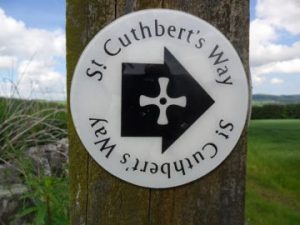 The amazing change in the weather after the rain of the last couple of days. Bright sunshine and warm from the start. Dispensed with the major uphill in the first mile or so climbing on Dere Street, 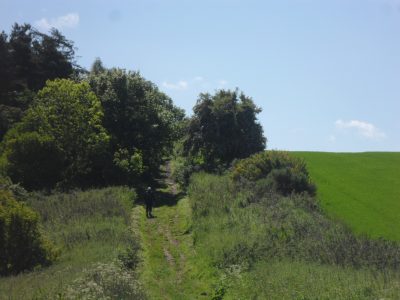 Undulating sandstone ridges and valleys were then the nature of the day. This gave delightful countryside walking on a summer’s day.

We met few people out and about, today a couple from the states walking StCW as part of their Scotland tour.

We had our first clear views of The Cheviot Hills as we progressed towards the farming community of Cessford. In the past these farms must have employed a small army as each one has numerous workers’ cottages on site. Now vast fields of wheat and barley are harvested by monster machines.

The next attraction was the ruin of the 15th century, Cessford Castle, on its fortified hill. The borders were a battlefield for many years. The castle emitted solidarity and the beautiful red stone shone in the sunshine. Very impressive.

Lane walking took us into Morebattle and our convivial pub for the night.