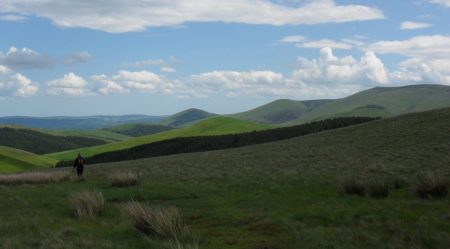 This morning’s walk through Kirk Yetholm onto the Pennine Way was nostalgic as we had walked the PW together in 1965 but didn’t quite finish it, we cut off to Wooler to catch a bus. So today we were completing. The PW finishing in Kirk Yetholm must have helped this tiny hamlet’s economy, there are several B&Bs and The Border Hotel. We were too early to meet any Pennine Wayfarers on their last leg [or legs]. There was a collection of worn boots outside one house. You can just imagine their owners saying never again.

St. Cuthbert’s Way leaves the PW after a mile or so and winds its way to cross the border into England high on the moors. 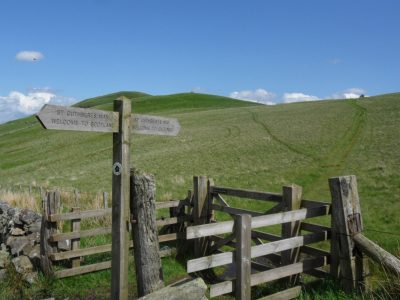 The trail is well used but not badly eroded.

Before long we were coming down into another valley. A dark pine plantation we walked through had a very spooky feeling to it – other walkers we met later had experienced the same. 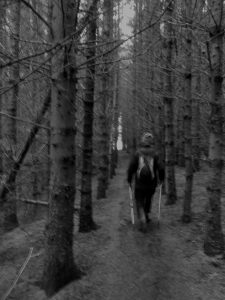 A remote farm was passed followed by a long walk down the Elsdon lane to Hethpool. This hamlet consists of a house, a farm and a row of associated cottages. These are executed in the Arts and Craft style and considered to be amongst the finest examples of such dwellings to be seen anywhere in Northumberland. A good spot for a lunch break in the sun.

There were good views up the College Valley into the heart of the Cheviots. 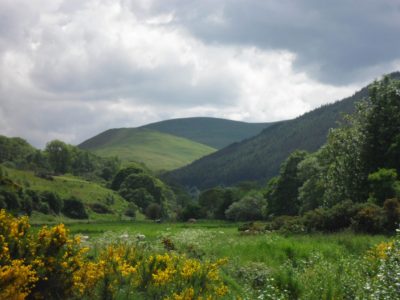 After crossing The College Burn we turned East on the slopes of Hare Law and gradually ascended to a remote shepherds cottage, Torleehouse.  Ahead we could see a monument on Lanton Hill for Alexander Davison who was Chandler to Horatio Nelson at the Battle of Trafalgar, an unsung hero. 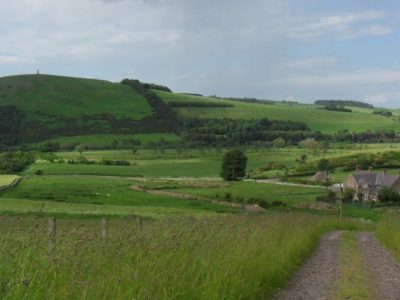 Here we left the way for a stroll down the lane to our superb B&B at Old Yeavering cottage.