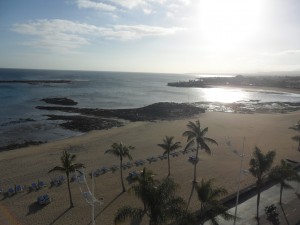 ‘Lanzagrotty‘ was a phrase from last century which the island has found hard to throw off. This is my first visit and my initial impression didn’t compare well to the other Canary Islands I’ve walked and climbed on.

Arrecife, which I had chosen as a base because of its central position and good bus connections, was rather drab – a mixture of Spanish and North Africa. My hotel is OK but the surrounding streets lack a certain welcome. But this a working town and port not a holiday resort.

English doesn’t seem widely spoken which is a pleasant change in Europe so my Spanish will get used and abused.
Things will look better tomorrow after I’ve had a night’s sleep and the sun is shining.
I’m here to start walking the relatively new GR 131 which traverses all the Canary Islands, missing out the wet bits. There are only 5 stages on Lanzarote which should give me a pleasant winter get away. It turns out that this a well signed way with both waymarks and signposts, there are good information boards and even numbered kilometer posts. Named the Camino Natural and not always numbered the GR131. 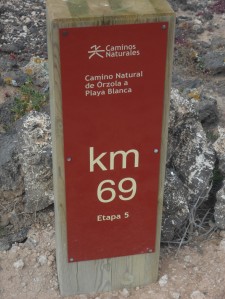 This is the best I can do for a map at present, will improve later.