Up to the Neue Regensburger Hut. 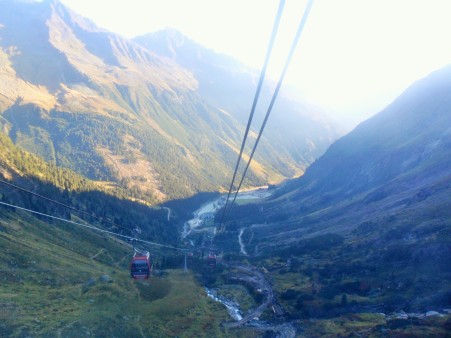 A quick down to start the day.

There was no change of mind so we were whisked down the hill in the ski lift and onto the valley bus to be dropped at Falbeson. We went straight to the Waldcafe for a coffee and information on the luggage lift to the Regensburger. The owner was the cable supervisor at this lower end and arranged for us to send up our sacks. Whilst sorting mine I realised that my waterproofs were missing, a phone call to the Dresdner and they were found in our room!! How could I be so stupid. I was preparing to go back up for them when the barman said he could arrange for them to be sent down on the ski lift, popped on the bus to here and he would send them up. I was doubtful if this would work but he reassured me and sent us on our way, no load on my back but a heavy load in my heart worrying about the waterproofs. 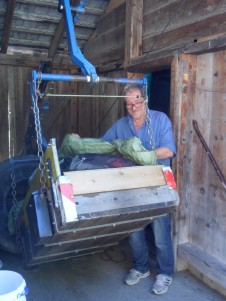 There was an initial steep zigzagging  section up through the woods which just had to be taken steadily in the heat. Near the top I picked up a bright bandana meaning to leave it at the hut. There were lots of day walkers using the track and stopping at a delightful cafe in an alp halfway up – we did the same and enjoyed a fresh elderflower drink. We had views down the valley to the prominent Habicht and up to the Regensburger hut. The route then started to climb again in earnest up to the Hut perched on the edge of the cliff. The luggage box wound its way on the cable above us with our rucksacks and hopefully my waterproofs. On the way down was an attractive lass who enquired if we had seen a bandana and when I produced it from my pocket I was rewarded with hugs and kisses – the day was improving! 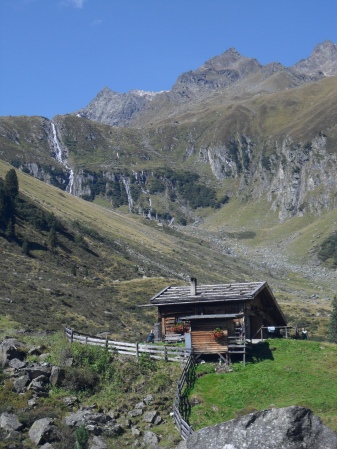 The hut was in a spectacular position on the edge and as the day was perfect the terrace was packed with diners and drinkers. Most went down to the valley later, though the hut remained busy with a lively crowd up for the weekend. Our sacks were there but no sign of my waterproofs yet, I thought the plan had backfired. We strolled up the valley towards the infamous col but it was too far to make out the conditions. The valley itself had many roches moutonnées and a silted in glacial lake. As we arrived back at the hut another delivery was coming up and this time there were my waterproofs, a celebratory drink followed. 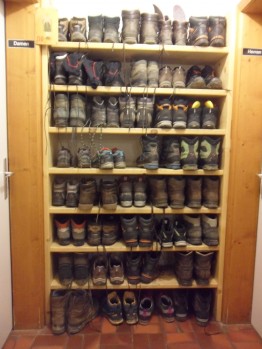 Quite an eventful day.  Thank you Waldcafe.