A sea of stones en-route.

Yet another bright sunny morning though Autumn has arrived and there is a heavy dew. We were off on a short traverse across the hillside with great views back to the Resenburger.

Then it was straight up to the Schrimmennieder pass at 2705m. All around were unstable stones and the path looped through them, I found the going tough and couldn’t sort my breathing. Two steps up one step down territory.

Arrived at the pass just as H and B set off to climb an adjacent summit, Besslerjoch. I left them to it and relaxed. Chatted to two German lads coming through, they  had studied in Liverpool and we reminisced over some good scouse pubs. The way down the other side was extremely stony and hostile. Several areas have been devastated by avalanches and the route takes a circuitous line to avoid the worst, thankfully well marked with red and white. Even so it was endlessly hard going and one was very aware of the need not to slip or trip.

Even when we were out of the steepest sections the path traversing a large couloir went on for ever. The forecast had predicted rain and the day was darkening. Rounding a bluff the hut was in sight and we broke into a gentle trot to arrive before the rain hit us. 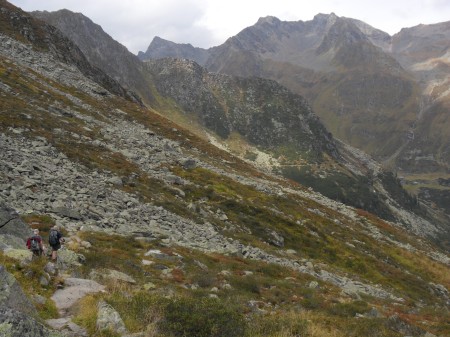 The Franz Senn Hut is massive and well equipped. Strangely it was the first Austrian Alpine Club owned one we had used.  A large restaurant was welcoming and we were booked into a room with Gunter who must have thought of us as strange English. He was on an Alpine training course along with scores of others who filled the hut, the drying room was particularly busy as they came off the mountains with all their kit.

Some colour in the stony wastes.