Behind La Frontera is a 3000ft wall of vegetated rock leading straight to the crest of the island, the result of a massive landslide. There didn’t appear to be any route through. The morning was brighter as we walked up through the hamlets of La Frontera to the chapel Nuestra Senora de la Candelaria with its prominent bell tower above on a volcanic cone. Here we found the sign for the Camino de Jinama, an ancient paved way linking the high plateau with the lowlands of Golfo, used to transport animals back and forth according to the seasons. We zigzagged our way up this unlikely way marvelling at the skills to construct such a path,  ? a thousand or more years old, modern roads weren’t started until the middle of the last century. On our climb we had plenty of occasions to rest and take in the bird’s eye view of the coast below. The vegetation was exotic to start and then we moved into the Laurel-Silva forest with the occasional Canary Pine. 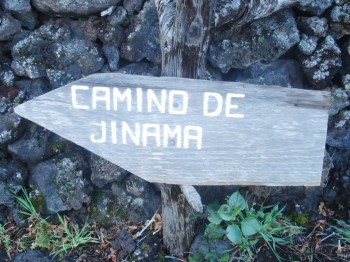 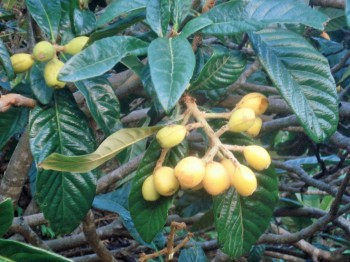 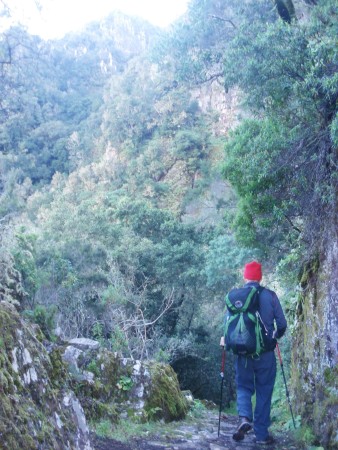 At the top, 1200m, was a small hermita and a large viewing platform, a road came up on this side so we were inundated with tourists bused up from the cruise ships which now come to the Canaries instead of Tunisia and the Eastern Med.

Walled drovers’ tracks weaved through the larval rocks in a scenery reminiscent of Scotland.  The fields provided meagre nourishment for cows and sheep.

San Andres seemed to be the centre of everything agricultural up here , like  Masham in the Dales. The local bar was doing a fantastic luncheon trade, no doubt of local meat products, we sat outside with a beer. 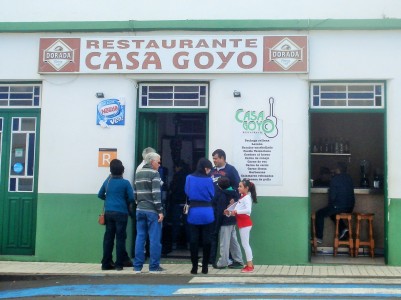 We were now on the GR131 our original objective and it was all downhill from here. We passed wind turbines used for pumping water up to a reservoir, feeding turbines when needed thus making this island almost self sufficient in electricity. Impressive technology. Yet further on we met a farmer cutting fennel stems for salads which must have been used for centuries.

The church in Valverde at the end of the Camino de la Virgen.

In Valverde the deserted Hotel Boomerang gave us Room 101 where I tried to consign into oblivion some of John’s excess equipment. He got his own back when to avoid losing them I hid our room keys in a chair on the corridor – he came out with the classic subtle reprimand  “I wouldn’t have done that”   Our night on the town didn’t materialise as almost everywhere was shut. A chance find of a tiny local bar, with men playing dominoes, gave us a beer and vague instructions to a shop up the top of town. We had just about given up after much climbing and searching when the shop appeared and we emerged with all that was necessary for a supper back in our room. It was with trepidation that I, keyless, approached the hotel front door but thankfully it was open so there is no story of bivouacking in the street.