The last time I was on top of Garajonay 1485m I never saw a thing and the mist this morning suggested a repeat. Whilst we enjoyed a good breakfast at Sonia’s some blue sky appeared.  As we left the wind was doing its best to blow the clouds away but not sufficiently to justify a scramble up the ‘Fortress’, a rocky bastion with sacrificial and worship links to the indigenous population.

Next was a great traverse round a large barranca with deserted properties far below. All around here were signs of the large fires of 2012 but generally the lower vegetation has grown back. Sitting for a break in a bus stop by the houses of Igualero we were surprised, we shouldn’t have been, when the local bus stopped  and deposited lots of walkers who dispersed in all directions.  This island has so much walking and the buses are a great help.

Simply following the signs and waymarking we arrived on top of Alto de Garajonay and through breaks in the cloud had some views but not of neighbouring islands. There was a steady stream of people coming up to the top as we descended to the road and car park. Ahead was the  huge Roque de Agando but we didn’t seem to get any closer as we weaved through the forests of giant heathers. Views into the deep Barranco Benchijigua reminded me of our toil up to Roque  de Agando on a previous occasion. A roller coaster of a path along the crest had us almost running in time to catch a bus [guagua in these parts] at Degollada de Peraza. Our problem once there was to decide where the bus stop was and guess at the timetable. The road down is spectacular in itself and this evening we had great views of snow covered Mt. Tiede. Safely in San Sebastion for supper of some unknown fish. 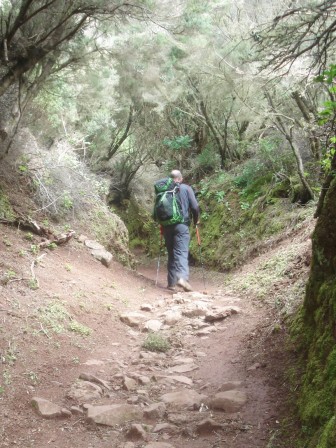