Caw is the peak far left.

The shapely summit of Caw has been a prominent sight from many of the Outlying Fells in the SW Lakes I’ve been exploring this winter. By chance, we parked up on this frosty morning at the exact point that our route set off up the fellside. Seathwaite in the lovely Duddon Valley, I remember staying here on a Ravenglass to Shap walk, the Inn was serving extra-large steaks on the eve of the Beef Ban as a result of BSE. Wallowbarrow Crag above Seathwaite is a favourite climbing venue, low lying, sheltered and catching all the sun going.

Caw Fell rising above kept us in cold shadow, a mine track made the initial accent easy but it was life-giving to emerge into the sun at the remains of buildings and an ancient dripping adit. Already the view towards the icy peaks was outstanding.

The start of the useful mine track. 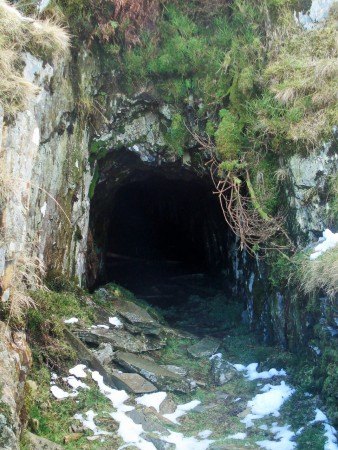 There was a group of happy walkers at the trig point, 529m, when we crunched up the summit snow, they had been staying at the Inn. They had picked a good weekend and the previous day had been able to see Wales, Ireland, the Isle of Man and Scotland from the summits. Today we only managed the Isle of Man, but the Lakeland peaks were striking once we had orientated them. Haycock, Pillar, Scafells, Esk Pike, Bowfell, Pike O’Blisco and the Conistons. We toyed with the idea of continuing up the Walna Scar ridge towards the bulk of Coniston Old Man but being old men we were satisfied with scrambling up the nearby Pikes and the smaller Green Pike. Lunch was taken, then took an old weaving path found heading downhill, when this was lost we just took a direct route back to the valley.

One of those magic days – did we really only walk 4 miles?