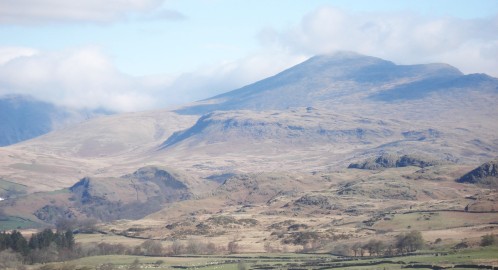 Eskdale with Scafell behind.

Today was another of motoring and quick isolated summits, so I went alone. After last week’s snow there was sunshine and warmth, the birds thought it was Spring.

I walked along Muncaster Fell in December 1997 on a two day Ravenglass – Shap walk but I had no idea whether I visited the trig point or not. So from the convenient parking for the  Castle, I was soon up the bridleway and at the stone OS trig. point.  Obvious views down to the coast at Ravenglass were far outweighed by the mountains to the north.

Muncaster Fell from the south. 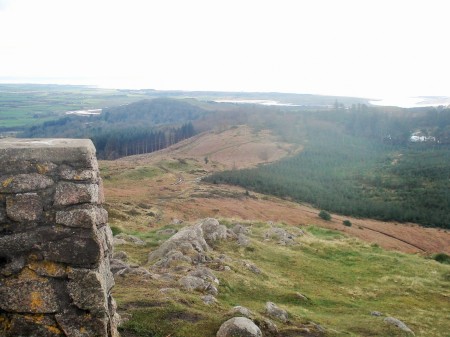 From Muncaster Fell to the coast.

The hamlet of Boot in middle Eskdale doesn’t lend itself to parking, There are two pubs, parking for clients only, and I won’t go into one of them ever since Tony [tea drinker extraordinaire] and I were refused a top-up of hot water to our afternoon teapot after a day climbing on the immaculate pink granite of the area. So that left The Boot Inn, Stuart the owner was only too happy to let me park. I used the crunchy pink granite bridleway signed Burnmoor Tarn as far as an isolated barn, until here my running shoes were perfect but once heading up to the fell top on the decidedly boggy ground I had doubts. What I thought was the summit turned out to be the distant Illgill Head and I was soon on the actual rocky top of Boat How. Scafell and Wasdale dominated but Harter Fell and surrounding rocky fellsides of Eskdale were dramatic. There was a peep into the secretive Miterdale – how many have walked that valley? Continuing west along the squelchy [this year’s favourite adjective] ridge what I thought were people turned out to be a stone circle, in fact, there were several. Was this land as barren in their time or was it forested? On the way down a group of abandoned barns were passed reminiscent of a Swiss scene. To put some money into the local community and as a way of thanks, I enjoyed a pint and some homemade soup in The Boot Inn, my sandwiches remaining in the rucksack.

The old corn mill at Boot.

A quick drive and I was parked under this little fell. Tree felling was in progress everywhere because of the fungus Phytophthora ramora and the place looked a mess. After a few false starts, I found a little path winding up, this must be the steepest way onto any of the outlying fells. The surprisingly open top again highlighted the mountains of Wasdale,  I noticed how close I was to the infamous Ponsonby Fell. From below came the whistle of the steam train chugging up Eskdale to Boot.

Irton Pike above the forestry chaos. 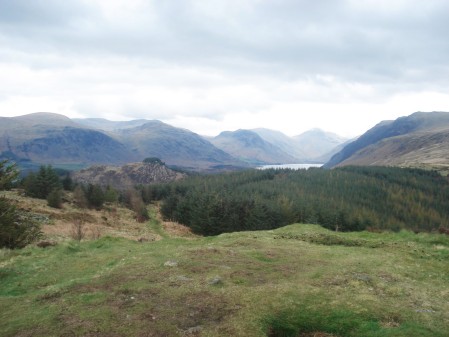 By the roadside is this sobering memorial…… 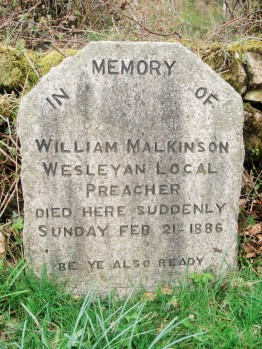