The weather was ‘nothing’ this morning, from my house I could see a mist hanging over Longridge Fell. The exciting curling match on TV, GB v Italy, had me enthralled and delayed any outdoor activity.  As an aside a curling ice rink is being constructed up the A6, there aren’t many around and the Winter Olympics coverage should give it a boost when it opens. I hazard a guess that they had scheduled its opening to coincide better with the Olympics.

A late decision was made to get out and walk the roads at the western end of Longridge Fell. A dry circuit on tarmac but with some steeper sections than I been willing to do recently. I didn’t expect any views but wanted to build on my recovery strategy and put my hip ligaments to the test. They have been improving with recent flat walking and my resistance-band side stepping exercises. To that end I completed the circuit quite quickly and was pleased with the 700 ft height ascended. Job done. 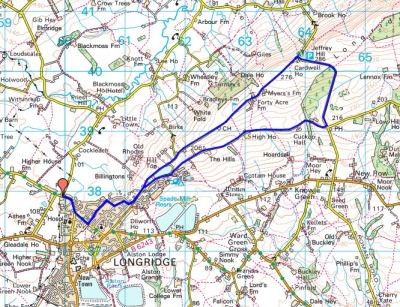 The road goes up past the Golf Course where a little activity was taking place – the wall running alongside the road took my attention for awhile as I admired the shades of green – the road itself has suffered this winter and like most others in the area will not be repaired quickly. 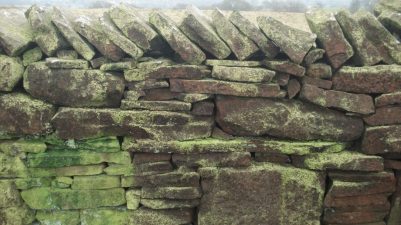 The busy New Drop inn is at the cross roads, the walls of this inn carry a white cross insignia and history records it was previously known as the White Cross Inn. Why the change and I wonder what the cross signified? The road I’ve travelled is the old road to Clitheroe over Longridge Fell which avoiding the valley bottoms. 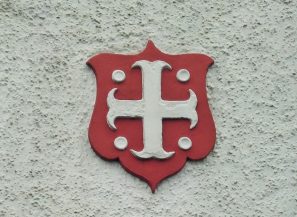 Turning left I follow a straight road which I always thought was part of the Ribchester Roman Road over Longridge Fell heading for the Salter Fell road and on to Carlisle but a dotted line on the map  suggests the Roman Road was to the west of the modern road.

There was only a vague view of Beacon Fell from Jeffrey Hill where the Roman Road changed direction. More nothingness.

On the return leg back to Longridge I couldn’t resist a look into Cardwell Quarry. Climbing here was banned by the landowner a few years ago and he has refused to be persuaded otherwise. I was surprised that the rock was not completely covered in vegetation due to lack of use. The outlook from here on a summer’s evening made a visit worthwhile – maybe someday. 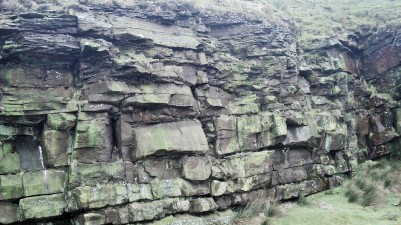 Down past the golf course once again and today’s modest road circuit was completed. That constitutes a ‘nothing’ day in my eyes.

Did you know the Americans celebrate an annual  National Nothing Day on January 16th, [I had my timing wrong].  Monty Python characteristically  took the idea further with their Adventures of Ralph Mellish – nothing happened …..

7 thoughts on “A NOTHING DAY ON LONGRIDGE FELL.”