It had rained in the night. I skipped breakfast and bought a sandwich in the little village shop. A bus was leaving for Maidenhead, it would be there in 10mins! Only about 5miles direct whereas I would be doing over 10. One of those beautiful wooden arched bridges took me over to an island at Hurley Lock. There seemed to be channels everywhere with boatyards tucked down side inlets. A boat passing through was heading to the Kennet and Avon. It was good to see more boats moving now the river was calmer. After the next lock, Temple, the path became a quagmire and I was glad of my poles for balance. It continued like this into Marlow. 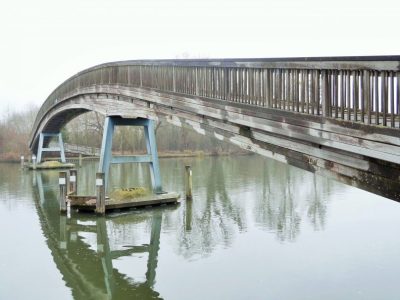 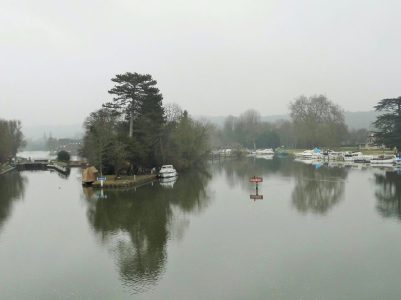 Bisham Abbey and Church looked impressive on the south bank, apparently the buildings and grounds are now used as a National sports training facility. There were oarsmen on the river this morning. The approach into Marlow was stunning and I saw more people out walking by the river than I’d seen all week. 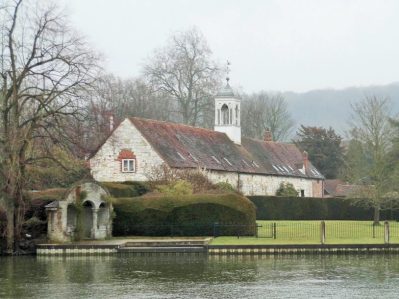 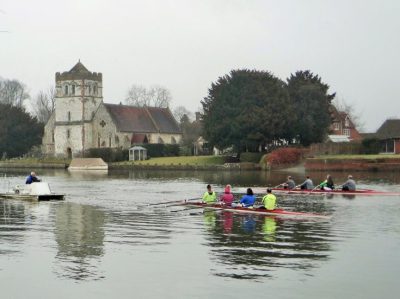 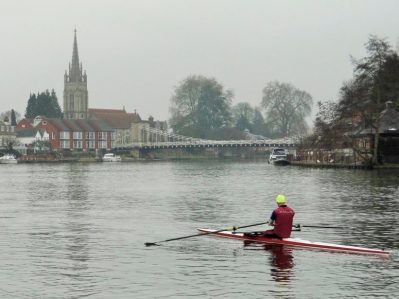 Marlow was busy with Saturday morning shoppers and I struggled to get a table in Burgers for my morning coffee and croissant. Before leaving I pottered about in the churchyard of All Saints by the bridge where I came across a memorial to T S Eliot who had briefly lived here. The quote from the poem  Burnt Norton, one of his Quartets,  struck a note with me.

A Time past and time future.
What might have been and what has been
Point to one end, which is always present. 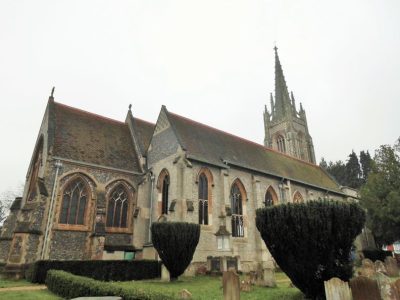 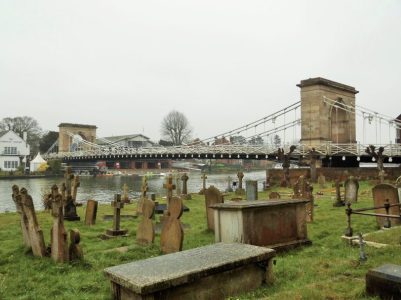 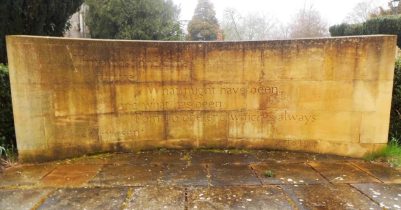 A curious walled path, must be an ancient way, twisted and turned through town and then the way by the river was closed for flood prevention measures. One tends to forget how badly some of these Thames towns have been flooded in the last decade. The diversion was badly signed and I ended up climbing over barriers and in even worse mud. Eventually parkland opened up with a popular path running through. The adjacent rugby pitches seemed to have a tournament in progress. 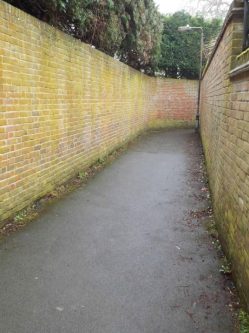 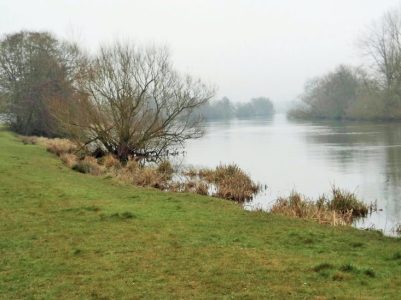 The muddy paths continued all the way to Bourne End which was a haven for boaters. People were out tinkering ready for the spring launch. The path was often squeezed between fencing, private houses and gardens to the left and private river frontage to the right. 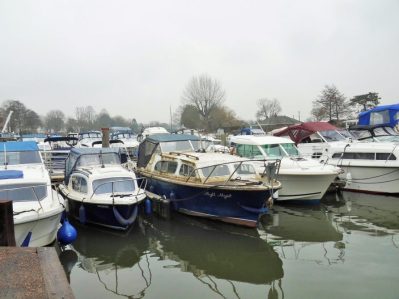 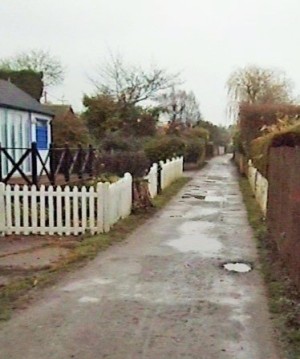 A footbridge attached to the railway took me to the opposite bank where I had been recommended a diversion to the characterful Bounty Pub. To be honest I was disappointed, it was rather scruffy with unfriendly bar-staff. Obviously for the well healed boaters its quirkiness  must be something out of the ordinary. They did serve the local Marlow Rebellion beer and their terrace must be a great spot to watch the river activity in summer, but can you imagine the crowds. 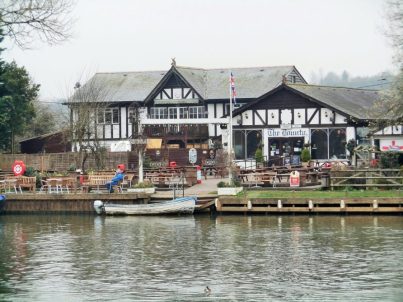 The next muddy stretch through meadows to Cookham was busy with families. Pretty Cookham is one of the richest villages in Britain with many houses well over a million pounds. Artist Stanley Spencer has a gallery here and author Kenneth Grahame lived here when young deriving inspiration for Wind in the Willows. Ignoring the posh shops and gastropubs I popped into the quaint Teapot Tea Shop, they don’t make them like this any more.

The next couple of miles once back on the river were surprisingly rural. I was amazed at how wide the Thames had become in the last few days. A few more house spotting opportunities and then road takes over into Maidenhead with a flurry of interest at Boulters Lock. 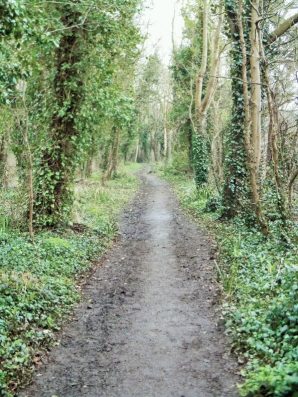 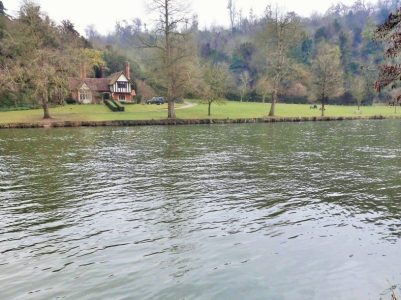 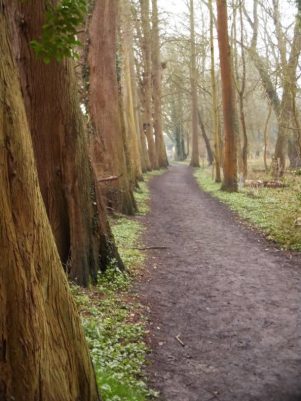 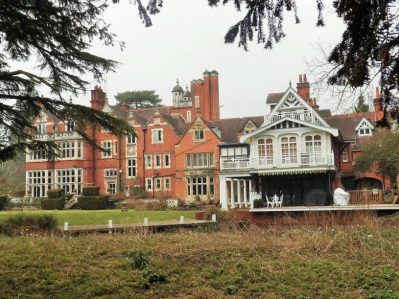 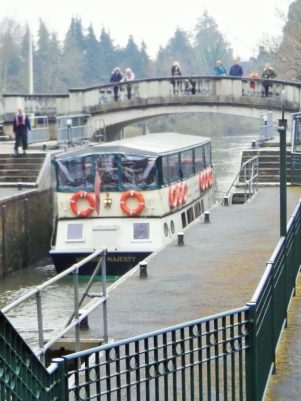 My hotel for the night, right on route, was of course ‘The Thames’, and very good it seems. It took me some time to get the mud off my boots before entering. They are advertising live music every Saturday night so it will be interesting how much noise there is. 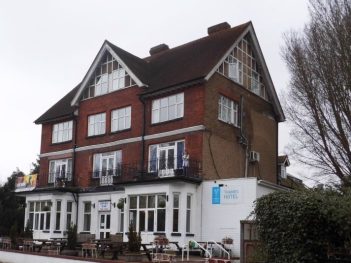