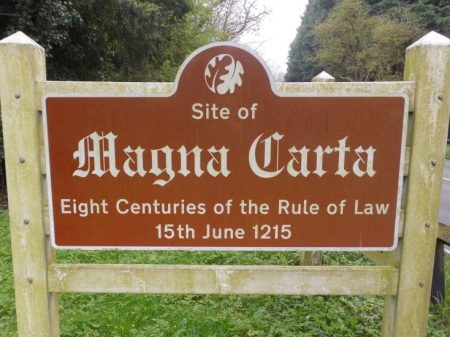 Runnymede – the meadow by the Thames where King John sealed the Magna Carta on the 15th June 1215, the birthplace of democracy?  Runnymede’s associations with democracy, limitation of power, equality and freedom under law attracts a lot of curious visitors aided by the recent 800years anniversary celebrations

Was it the dull weather that dulled my early morning navigation? I seemed to struggle to find the Thames out of  Old Windsor. Once on the muddy path I was soon in Runnymede. Strangely the car parks were empty with only the occasional dog walker for company. I was here last summer. visiting the Commonwealth Air Forces Memorial and indulging in the Sunday Buffet at the Runnymede Hotel.  So today I wanted to see some of the other memorials relating to Magna Carta and its 800th anniversary but unfortunately the fields were flooded making access impossible. They are water meadows after all.

I did get to see The Jurors an art installation by Hew Locke, 12 bronze chairs decorated with images reflecting struggles for freedom and equal rights throughout the world in the past and ongoing. There was much to experience in textures, images and history. I was alone in my exploration as cars sped by on the main road. For more detail look here . I’ve just realised I didn’t actually sit on any of the chairs, I think I was overawed by the whole experience. 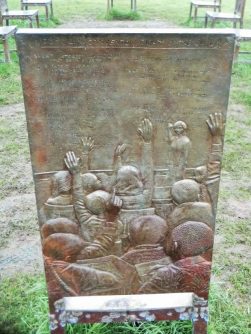 Conversely I was soon walking through the nearby slightly incongruous ‘pleasure grounds’ – not much pleasure in today’s cold and damp conditions. However there was an interesting statue of a young looking, Queen with adjacent time lines through history since the Magna Carta 800 years ago.

I couldn’t resist a morning coffee in the Runnymede Hotel, £4.50 is the highest so far but it was worth it for the relaxing sofa and the chatty young staff. Everyone else was in business meetings.

The path ducks under the M25 and as always the underbelly of bridges is fascinating.

As I’ve said the Thames was high, with flood alerts, and I only just got through on the towpath in places. Many of the riverside houses are built or rebuilt raised up to try and alleviate the problems of the inevitable floods. 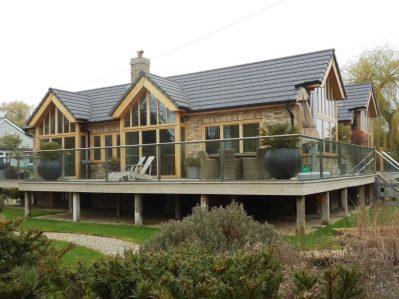 The next stretch past Staines was not particularly interesting, suburbia by the river. I think it was made worse by nothing moving on the river due to  the strong currents. However to make things more interesting there was a bronze statue by Diana Thomson – The Swanmaster, related to the crowns right of ownership of Mute Swans. And nearby The London Stone marking the once upstream limit of the cities authority on the Thames. 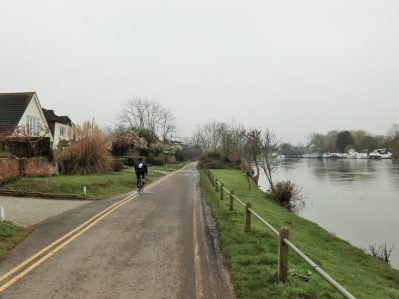 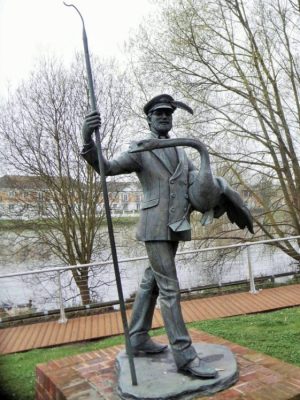 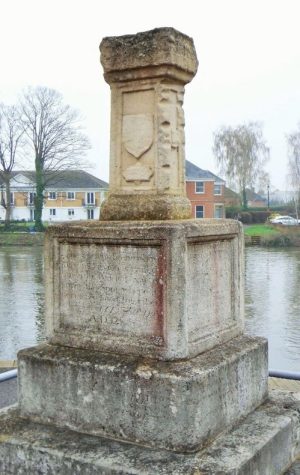 I must have speeded up without realising and was at Chertsey Bridge in fast time. I’d not stopped or eaten so was tempted into The Kingfisher by the bridge where I was able to relax and kill time over a beer and sandwich. A friendly couple talked of the river and showed me pictures of their raised  house on an island I will pass tomorrow.  They have sailed the Thames many times but seemed intrigued with the notion of walking it. Three blokes were walking the path in stages one day a week when the weather allows. 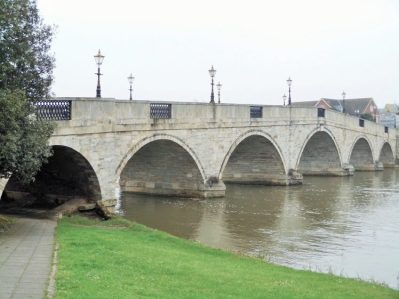 A riverside meadow was overrun by dog lovers. There followed an area of houseboats some of them quite creative in design. The strange thing is you never see anybody on these ‘boats’ presumably the owners are working up in the city. 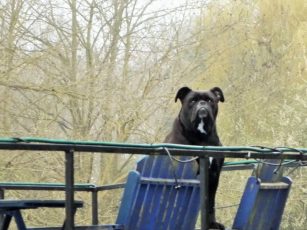 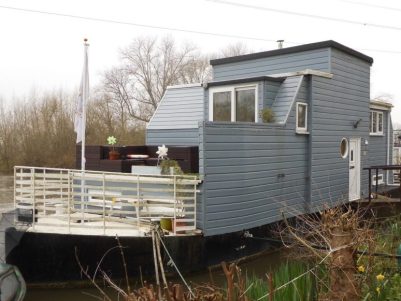 Then I was at the ferry over to the far bank where the path continues alongside the river through to Walton.

But I’d booked a night in Shepperton, in retrospect perhaps unwisely, so had to follow the ‘inland’ alternative. The 400 year-old Anchor Inn next to the church in the old part of town turned out to be a good choice.   http://www.anchorhotel.co.uk/