Ex-Little Ferry on the Fleet.

Crossing the Fleet today on the bridge far left.

At one time there was presumably a ferry service at the Little Ferry marked on the map but now a detour is needed to get round the estuary using the A9’s bridge.   It was refreshingly cool when I left Embo across the dunes which are apparently threatened by another golf course development. People were out dog walking and it is interesting to see how many are English who have moved up to this part of our land for peace and quiet. Everyone I met had warnings about the local tick population. Before long I’d joined the track of an abandoned railway which gave easy walking. This became tarmacked with the ruined C14 Skelbo Castle visible ahead on an outcrop above the Fleet. It was along this stretch that I also became aware of the prominent monument on Ben Bhraggie which overlooks Golspie. This is the statue to The Duke Of Sutherland who became notorious for the clearances forcing the population to resettle in favour of sheep. Apparently it is 100ft high and was erected in 1837 after the Duke’s death. The monument was a constant landmark for the next couple of days. 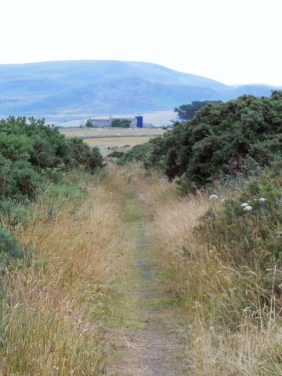 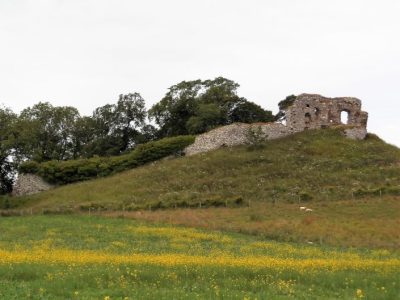 The road now followed the coast and there were ample opportunities for seal spotting as they lay up on the exposed sanbanks. These are Common Seals and have a head and tail up posture on land. They have probably just finished rearing their pups.

After that pleasant interlude the trail came up against the A9 and entered woodland above the rocky shore. As it is in the making the route was very overgrown and vegetated, I stopped briefly and realised the place was teeming with ticks. I moved on quickly but became paranoid about any slight itch on my exposed skin. 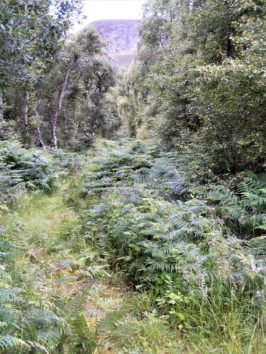 The busy A9 had to be joined to cross a bridge over the River Fleet and was rather dangerous with a narrow verge. Looking down I was thrilled to see salmon leaping from the water. Once over I was glad to escape into a lovely wooded area on a well-marked path which if I had followed all the way would have brought me to the foot of a rock climbing venue, bolted routes on conglomerate rock. Looking back whilst I ate lunch I could see climbers in action and I regretted not having visited. I was back beside the railway line which was followed through fields to a level crossing. 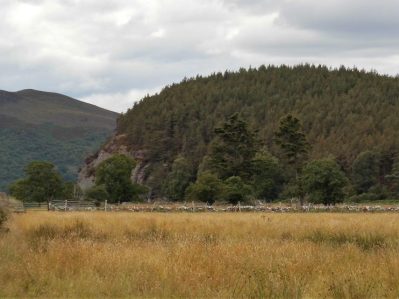 A long narrow road headed back to the coast and into a forest park where I followed a nature trail. 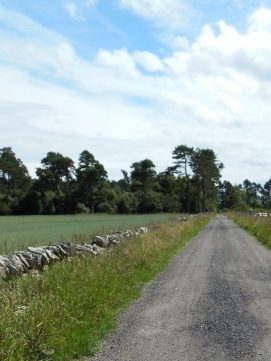 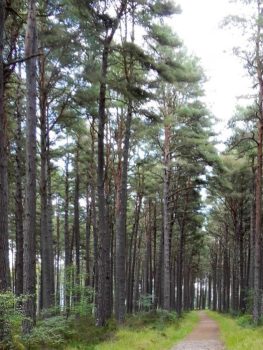 Another golf links was crossed on the outskirts of Golspie and then a gentle stroll along the dunes into town.

My homely b and b was on a quiet backstreet and on their recommendation I walked into town to the Fish and Chip restaurant. There were queues in the street for takeaways and the restaurant was full, apparently people come from miles around and I suppose there are a lot of holidaymakers about. Not wanting to wait for ages I visited the reliable Co-op shop for some sandwiches to be eaten on a bench overlooking the harbour.   Back at my room a couple of ticks were removed from my legs.