As soon as I was on my way this morning the familiar sounds and smells of the coast came flooding back. I was glad to be here though this is supposed to be the most arduous day of the whole trail.

A gentle stroll along from the harbour, just above the beach, and then at a ruin a sudden dog leg climb towards Navidale, a few houses and a cemetery. For the rest of the day I was well above the sea but it was ever-present. The Ord of Caithness was prominent ahead, I am in Caithness for the rest of the trail. 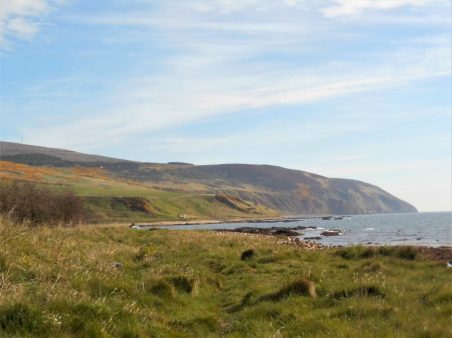 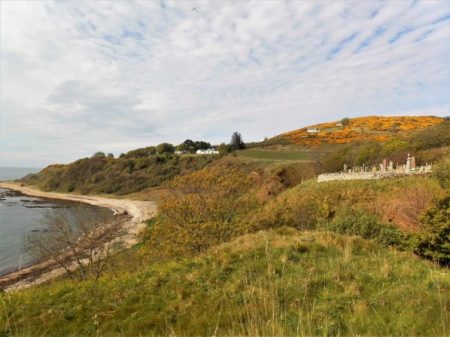 The most notable detail throughout today’s walk was the gorse, I have never seen it so brightly coloured before and in places I became heady with its coconut fragrance.

Easy walking through rough fields was tempered by the lack of waymaking on this stretch. Apparently some landowners don’t want markings but you are still free to walk across their land in Scottish Law. There were a few small burns to cross and then indistinct trods climbed gorse slopes to meet a more distinct track heading back down again. You could easily get lost hereabouts. Somewhere along here a couple of WW2 lookout huts were passed and waymark posts appeared.

The Ord burn was easily crossed and then height gained steeply into the moorland of Ord of Caithness. Fairly random trails across damp moorland were followed almost to the A9 road and yet I felt a long way from civilisation. 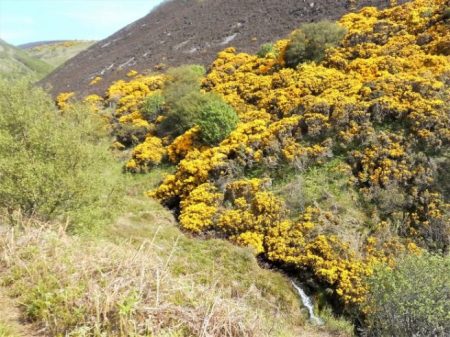 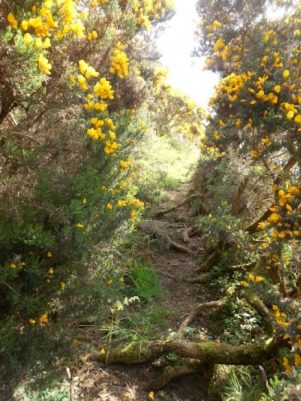 The sounds of the sea were still prominent despite being well above it. Below was the green table, a flat promontory and site of an ancient fort. A secluded bay to its north gave an idea of the birdlife to come. 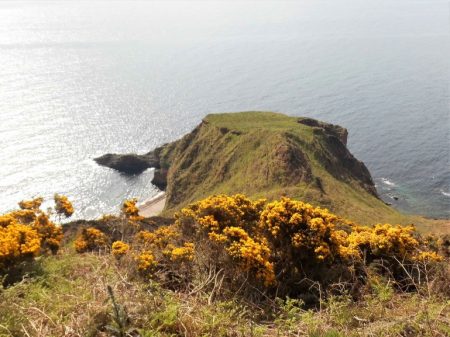 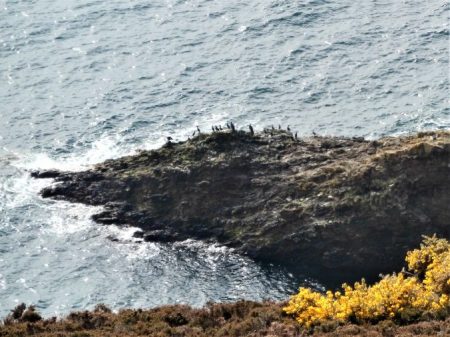 The ground became boggier but as there has been little rain in the last two weeks it was pleasant to walk on rather than troublesome.  A burn was followed gently downhill past ruined buildings from the 19th century and a recognisable broch from the iron age with its chambered entrances. 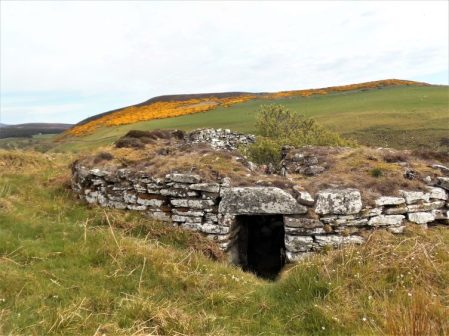 Over the next steep stile the ground dropped away alarmingly into the deep ravine of Ousdale Burn. Attempts are in progress at building wooden steps but for now I was grateful for the trees I could swing off [opening photo]. Eventually down the burn was no problem as a bridge has been recently erected, there is a surprisingly large amount of new infrastructure appearing. I must make a donation to the charity responsible, I suspect a lot is a labour of love. 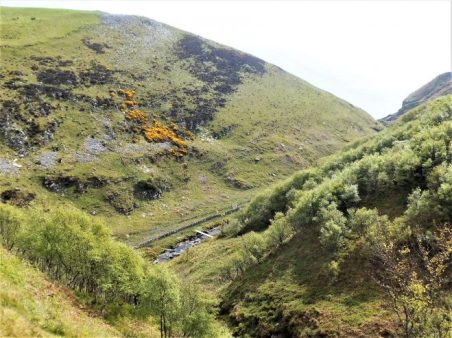 Of course it was steep up the other side of the ravine.

One came closer to the sea and seabirds were flying everywhere whereas before it was mainly smaller birds amongst the gorse. 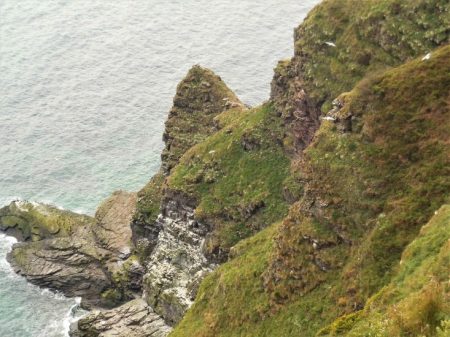 Sheep trods weaved over the headland between the gorse bushes, a tough section. Then there were the ruined buildings of Badbea and there in front was the monument to honour the tough families forced off the land in exchange for more profitable sheep. Life at Badbea would have been harsh, many residents emigrated in search of a better life and the memorial commemorates many of them. A good spot for some lunch. Having seen nobody all day suddenly people started appearing from nowhere, well actually the close-by A9, all attracted by the ‘clearance village’ signs. 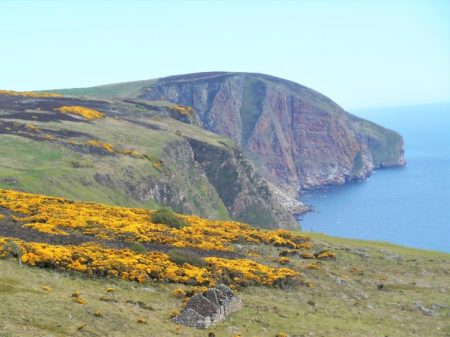 Through the gorse there was much bird song and I managed to capture a photo of a Brambling on the monument itself. 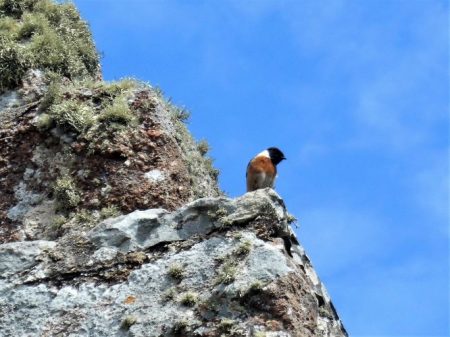 Easy walking on heathery tracks continued over the headlands, if not quite on the edge of the cliffs close enough to hear and see more seabirds. Inland were the Caithness hills with the conical peak of Morven, at 706m the highest, in the background.

Two towers, navigational aids from the 19th Century were useful markers today. They were aligned for approaching Berriedale harbour and used to carry lights, the Duke of Portland’s Candlesticks.

More headlands appeared ahead but I’d done enough for today. The harbour of Berriedale was below and dropping down to the A9 I headed for the renowned River Bothy tearooms for tea and cake whilst waiting for a bus to take me to my B and B in the scattered village of Dunbeath. 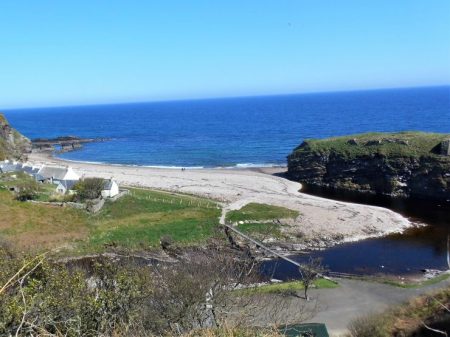 Its been a long day and fortunately I didn’t go far astray in sometimes difficult terrain. A good start to my week and not as arduous as I was expecting mainly because the bracken has only just unfurled, wait till it’s head high. 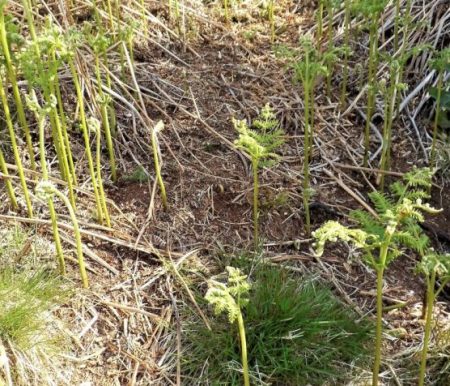 Accommodation – Inver Park House B & B 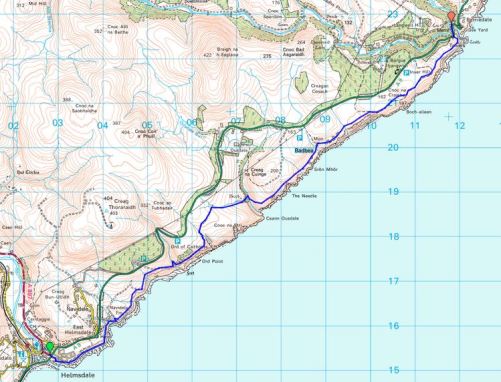