A dreich day on Sinclair Bay.

Not so many photos today, it rained.

Near my b&b in the old part by the harbour was a building  – Telford House, further research shows that the famous engineer and architect Thomas Telford designed the area, Lower Pulteneytown, and harbour which allowed the herring industry to flourish from the beginning of the 19th century. 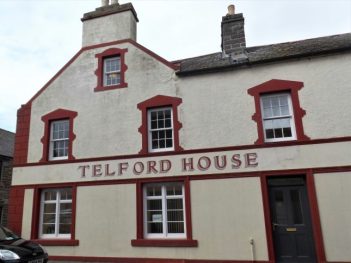 Wick is also in the Guinness Book of Records for having the shortest street in the world. Ebenezer Place is just 6ft 9in long. The street is one end of the Mackays Hotel built in 1883 by Alexander Sinclair who returned to Scotland having made his fortune in America.

Nonetheless I can’t say I was sorry to leave Wick, maybe I’m being harsh.

In view of the weather I had thought of taking a short cut on roads to Ackergill but the guide suggested it would be a shame to miss Noss Head and Castle Sinclair.

The forecast was for rain all day but as I walked along to Staxigoe it was the wind causing discomfort rather than the light drizzle. I used the shelter of a bus stop to weatherproof myself for the rest of the day. The little harbour at Staxigoe had all the usual features of an old herring port but there was also an unusual barometer pole from 1850 to help the fishermen gauge the conditions at sea, fairly bleak today. 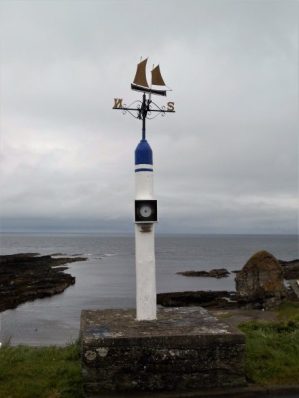 Walking on the road led to Noss Farm, the guide mentions a sign ‘Walkers Welcome’,  it’s covered over – I wonder what happened? 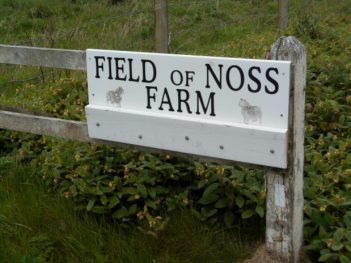 Some pleasant cliff walking followed, although the cliffs are much lower the scenery is still very dramatic. Grey seals lazed on the flat rocks and in the bay their heads were bobbing above the waves. 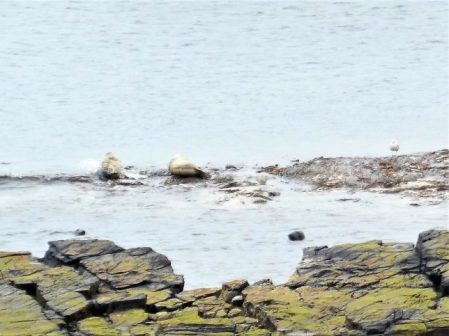 A couple of geos were passed with small flat sea stacks.

The way towards the lighthouse was across marshy ground with several varieties of orchids growing. No idea what they are.

The lighthouse is still operational and has its own letterbox with a quirky sign, where else would you find this – must be a lovely community around here.

When I saw Castle Sinclair Girnigoe ahead the longer route was vindicated. An impressive and evocative structure in a stunning setting. It has a long and varied history as is common with these Scottish outposts. The powerful Sinclair family were residents from the early 14th century to the mid 17th century. 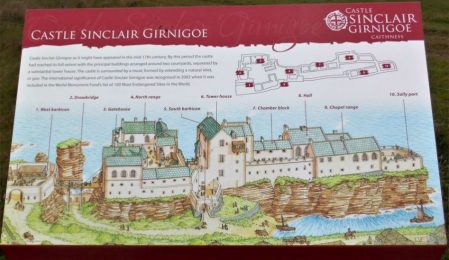 By now the wind was bringing in heavy showers so it was head down across the fields to Ackergill Haven. Up the lane was a scattering of houses and what looked like a village hall, wondering about some shelter I approached the open door to find an active gym with people doing their stuff. It seemed incongruous out in this remote place. 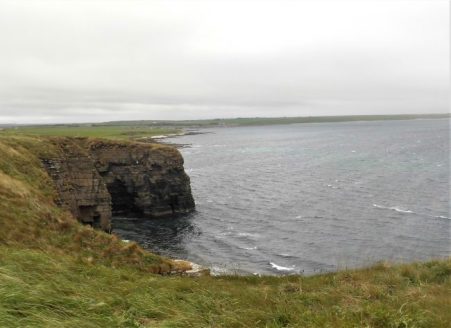 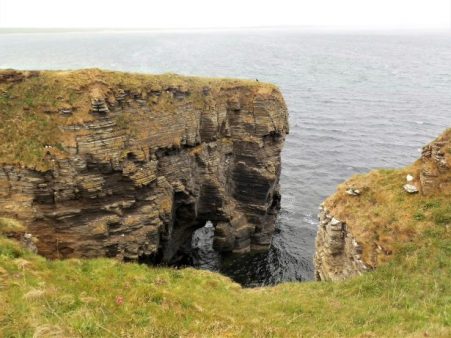 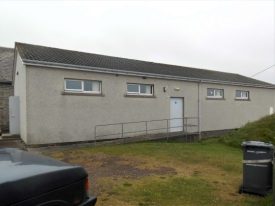 Round the back the route was signed into a field containing inquisitive, nervous and sturdy cattle, I crept around an adjacent field.

I think these are whale bones, on a wall… 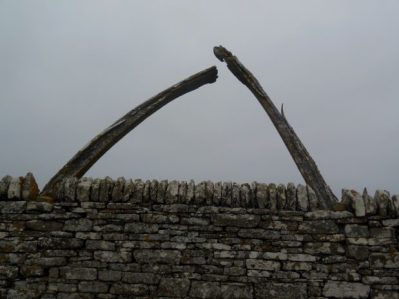 There was a private driveway leading to Ackergill Tower, a stately looking building possibly a shooting lodge, surrounded by high walls. I found a relatively sheltered corner with a picnic table, perfect for lunch.

At this stage I was still relatively dry but once out of the shelter of the estate buildings the way went onto exposed sand dunes. Ahead in the mist was a golf clubhouse and I had visions of hot coffee, alas all was locked – no golf today.

Pushing on I was able to avoid the taxing ups and downs of the sand dunes and walk along the beach, it was a long beach. The birdlife was different, waders at the water’s edge and terns flying overhead.

I came to the crossing of the River Wester and realised how deep and fast flowing it was on the beach made worse because of high tide. I was prepared to bypass it all together until a little inland the water was wider and I paddled across, I was already soaked anyhow.

The next obstacle was the railway for launching pipelines into the sea.

At Keiss there is a small sheltered harbour and beyond it I could just make out Noss Head back across Sinclair Bay. One can imagine the relief of those fishermen when they returned from stormy seas to harbour. There is not much else here.

Appropriately my lodging is the Sinclair Bay Hotel, cosy and warm with some decent food and ale. The forecast for tomorrow looks grim. Sweat dreams.