No not me reaching  J O’Groats – but a short walk past some historic sites.

I woke early. uneasy about the weather. The forecast had been dire with heavy rain and strong winds and looking out of my window that’s just how it was. I wanted to enjoy Duncansbury Head and my arrival at JO’Groats so some quick decision making came into action at breakfast.

“May I change my reservation with you to tomorrow night?”   –   “No problem”

Decision made, between mouthfuls of Muesli.  I would do a short walk and hopefully catch a bus back and hope tomorrow is better.

There was nobody out on the coast this morning, not that I’ve met many people all week. Just after the small harbour of Keiss there was a Broch. The information board suggested that it had been of some importance in the Middle Iron Age.  I was unimpressed by the pile of stones.

So onwards passing WW2 pillboxes to a prominent castle built in the late 16th century by the Sinclair clan [them again]. When it fell into disrepair they built a new one nearby. 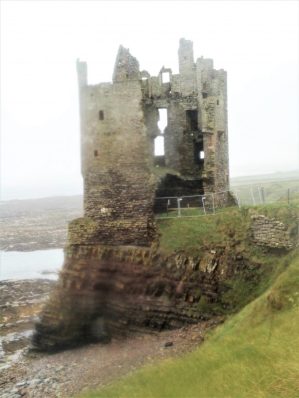 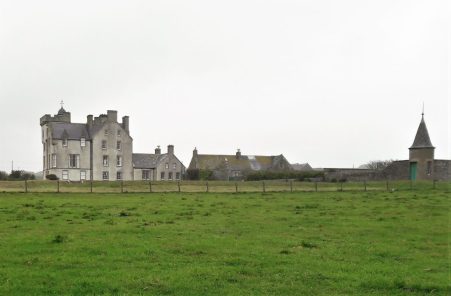 The cliffs are low now and the rock strata giving horizontal beds exposed at low tide. The path ran outside fields and one enthusiastic sheepdog ran alongside protecting his patch, I was hoping the fence was intact.

By now I was soaked and suddenly realised I’d dropped my camera somewhere so it was back about a mile to eventually find it near a stile I’d had difficulty negotiating. At one point I was obviously on the wrong side of the fence when I had to balance along the top of a slippery wall hanging on to the barbed wire. Everything’s getting wetter and wetter including my camera.

A few interesting geos were passed as usual.

Then the larger Nybster Broch appeared, here one could clearly see the circular structures. Nearby was an impressive monument to Sir Francis Tress who had excavated the site in the 1890s. There were a couple of other monuments nearby, for what reason I don’t know.

I was cold and wet but soon on a bus back to the comfort of my hotel. A drink in the bar at lunchtime was entertaining listening to the locals, though every other Scottish word seems to begin with an F.

PS. Just noticed on the JOGT facebook page for today – I made the right choice.