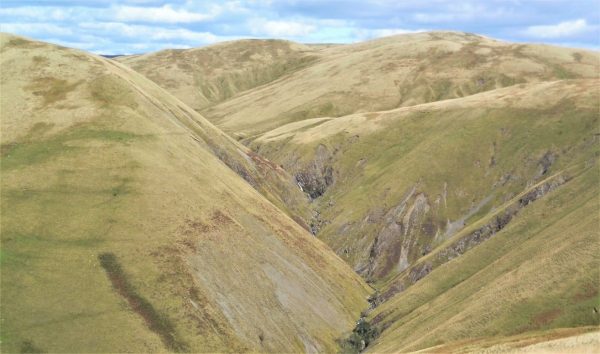 A walk of two halves, coming with a health warning.

I’ve tagged this post ‘Lake District’ which is not correct but the motorway skirting the Lakes gives most people their only view of The Howgills and that’s as far as it goes for the majority. I would imagine for every thousand walkers setting foot in the Lakes there will be barely one in The Howgills. That view from the motorway shows extensive rounded hills with deeply divided valleys, long fingery ridges radiating from the central mass. The Lune Valley and Mainline Railway share that Western Boundary with the motorway, there is one particularly conspicuous, twisting deep valley leading intriguingly into hidden depths – this is the Carlin Gill.  Photo above.

I arrange a walk with Sir Hugh and suggest The Howgills for somewhere different, he says he has always wanted to explore Carlin Gill. The die is cast.

I have vague memories of walking up the gill to take a look at Black Force and The Spout, two hidden waterfalls. Out comes Wainwright’s ‘Walks on the Howgill Fells’ for guidance,  a few chapters cover parts of our intended route.

Carlin Gill – “The walk cannot be done if the beck is in flood. A half-mile section is a battle against nature in the raw and ends in a desperate scramble. Nonagenarians should think twice before attempting it.”

Having parked up by the Gill we are not certain whether ‘the beck is in flood‘ or not, there seems a lot of water in it after recent heavy rain. We set off debating which side we should be on, the best path often on the other bank and sufficient water to deter wading. Sheep trods are followed with slippery rock encountered on steep obstructions. But progress is made, we marvel at the sunny weather, our solitude and surroundings.

The start of Carlin Gill.

Deeper into the valley we are forced alongside the beck where care is needed to avoid a slip. Soon [it was over an hour] we are alongside the impressive Black Force, a waterfall tumbling down a gully opposite. 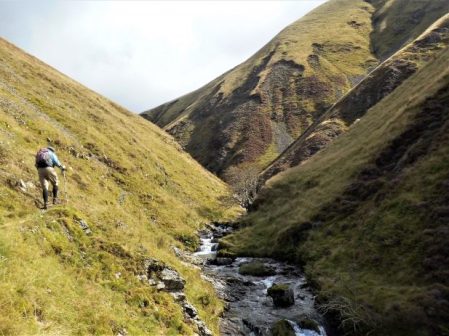 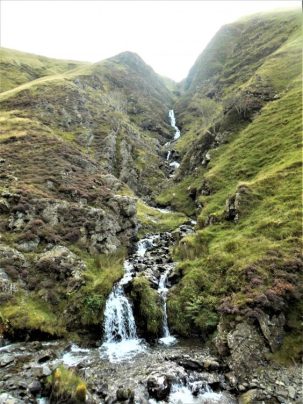 We do not like the look of the scramble up it which is one of our escape routes! So we persist up the gill a few more hundred yards until stood under The Spout, the 30ft waterfall blocking our exit. An impressive place to be. I’m pleased we penetrated so far and would be happy to return the way we came but there are primitive stirrings from Sir Hugh to climb out ‘now we are here’. 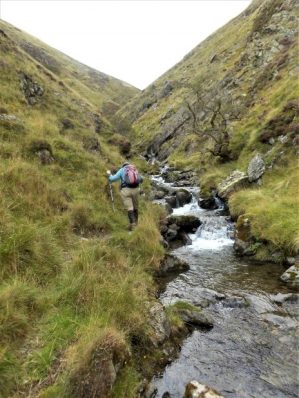 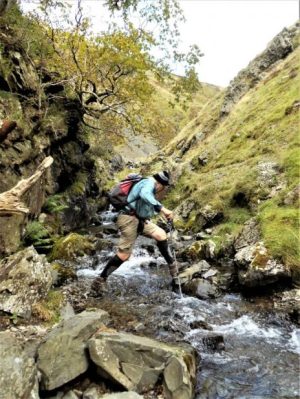 Let’s look round the corner. 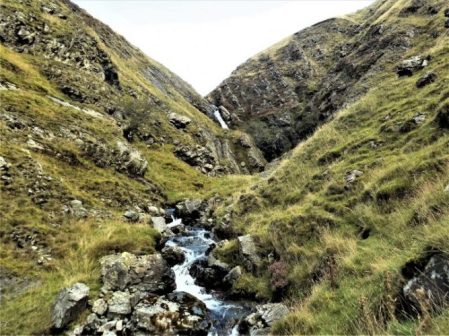 Wainwright says to climb a crack in the rib to easier ground above the fall, a steep scramble. Neither of us likes the look of the slippery crack or the steep ground above it. The other side of the gill looks as steep. Curiously we don’t think of retreat but convince ourselves of a better way just to the left of Wainwright’s option, some steep grassy rakes avoiding the loose rock. It is only when 15ft up with Sir Hugh clinging to grassy handholds and feet skidding on wet moss that I have a change of heart – “Why don’t we go down?”    “I can’t”  came the reply.

Fast forward and I’ve coaxed Sir Hugh back to relative safety and we progress to better handholds – heather rather than moss. The angle eases and we have time to sit and have a team talk about further progress.  Soon we are traversing on sheep tracks above an ever-increasing drop and then it is all over as we arrive at Blakethwaite Bottom a boggy basin. 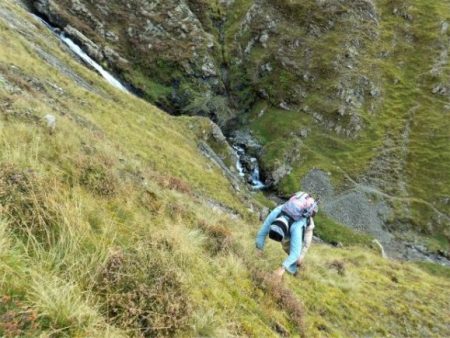 As exposed as it looks. 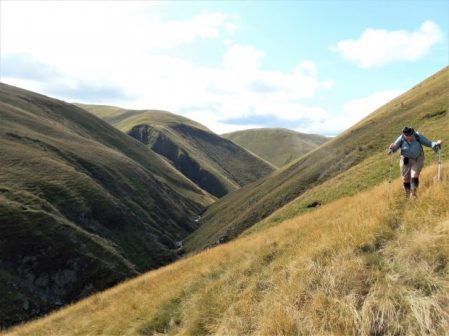 Having defied death all was plain sailing from now on except that we were only halfway up onto the tops. A vague track led up to a vague col where we turned right and were able to stroll alongside each other, discussing the day so far, onto Docker Knott. The views were staggering particularly to the north. Undulations led to Wind Scarth where we had to be careful to keep right avoiding a well-trodden track to The Calf. There are no walls, fences and few cairns up here to help navigation but that is one of the attractions of these open fellsides. An upwards path heads towards a visible cairn on Fell Head at  623m the highest point on the Western Howgills. A couple of fell walkers passed us on the ridge without any conversation, the only people we saw all day. At the cairn, we sat and had some lunch and took in the 360-degree views. Everywhere was clear Morecambe Bay, The Lakeland Fells, distant Galloway, Cross Fell and the Northern Pennines, the Three Peaks, Bowland Hills and possibly far away Snowdonia. Sir Hugh was having a great time with his long zoom lens. 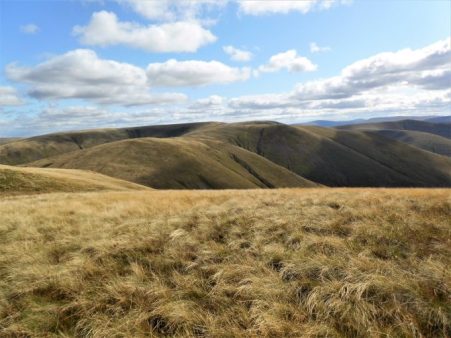 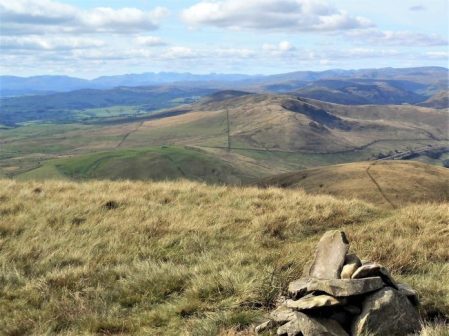 West towards the Lakes.

Careful compass work made sure we were on our way towards the lesser top of Linghaw and onwards over Back Balk with the motorway in the background to arrive back directly to the car parked ironically on Gibbet Hill, we had escaped the gallows on this memorable day’s walk.

The Lune Valley and our car insight.

Well done Sir Hugh, mission accomplished – it will be less steep in The Broads next week!  Check out his post for further photos.

I am now keen to return to the Howgills and explore further but perhaps not in Carlin Gill.

I didn’t mention that a tree at the base of the spout was festooned with Tibetan Prayer flags and strangely a climbing helmet. There were also some ashes scattered on the rocks. Our imaginations ran wild  – was this someone’s favourite retreat or was somebody fatally injured on these rocks? 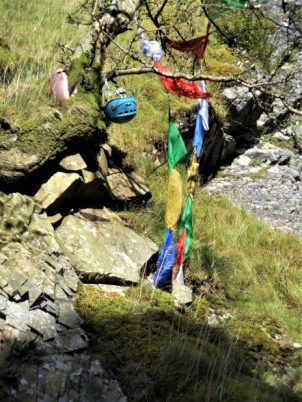 I’ve just ‘googled’ Carlin Gill Accident without a lot of success except for one accident that happened to Sir Hugh, who had posted that he slipped heavily on a patch of ice near the bridge at the start of the Gill whilst on a simple walk along the lane in winter January 2017. https://conradwalks.blogspot.com/2017/01/tebat-sedbergh-road.html

19 thoughts on “UP THE SPOUT. CARLIN GILL IN THE HOWGILLS.”