“I may not have gone where I intended to go, but I think I’ve ended up where I needed to be”  Douglas Adams.

After a late breakfast Sunday, I set off to Slaidburn for a gentle walk around Stocks Reservoir. I was enjoying the drive over with the roof down listening to the West Indians scoring too freely in the Test match. As I came over the rise on the road up from Cow Ark there in front of me were the Three Peaks of Yorkshire, a view I always thrill to. Out of the corner of my eye were the Bowland Fells, vying for attention. I was aware of the half-hidden valley of Croasdale and realised I hadn’t visited it for a year or so. A quick change of objective and I found myself parked up in that little pull off at the very top of Woodhouse Lane. I pondered on how many times I’ve parked there over the years especially in the early years of this century when we were developing the bouldering potential of the Bull Stones higher up the valley. We would race up the track to climb all-day and then most nights come down in the dark, we knew every twist of the route.

Of course, we were not the first to come this way. The Romans forged a road over the fells, probably adopting ancient ways, linking Ribchester with Carlisle. Some of the culverts on this The Hornby Road date back to the Romans. Later there was trade between the Monasteries of Yorkshire and the coast, wool one way and salt the other, hence the other name for this route, Salter Fell Track. A metal marker on the track commemorates the 400th year anniversary of the Lancashire Witches being dragged this way to their trial and execution in Lancaster. 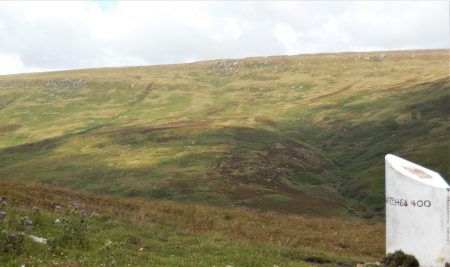 It was a Lancashire Witches Walk waymark on the fell gate that reminded me of probably my last visit here whilst undertaking that excellent way. At the time a group of workmen were repairing a section of road just past the bridge. A gully was undermining the road and an expensive shoring up exercise was underway. That has been completed and the repairs extended up what was a very rough section of road by resurfacing with limestone chippings which look out of place in this gritstone environment. No doubt this has all been done using taxpayers funds and yet the only people to benefit from it are the shooting fraternity who have a lodge further up the track. 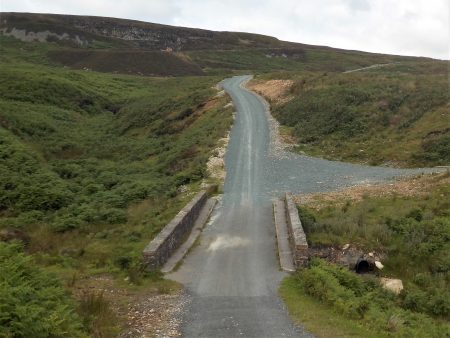 Few people walk up this valley and today the only people I see are motorcyclists who are able to travel right through from Slaidburn to Hornby a classic moorland journey. The man himself, A Wainwright described it as the best moorland walk in England although I’m not sure what he would have had to say regarding the motorcycles.

My more modest aim today is just to reach the gate near the summit and then traverse back along the hillside visiting the Bull Stones. I’ve brought my binoculars along as this area used to be a good place to see Hen Harriers, but alas no more due to persecution from ‘hands unknown’.  Many of you will know the story of Bowland Beth. So I don’t see harriers but I do spot a pair of kestrels, some stonechats and more excitedly two ring ouzels.

I sit under a favourite boulder and eat some lunch whilst gazing down the valley with Pendle in the far distance, there is not a soul in sight. The only sounds are the occasional bleating of sheep and the cries of seagulls which come inland here.

I continue along the edge of the rocks, past the spring of sparkling water where I know I can refresh myself even in the middle of summer. Around the corner, the continuation of the rocks is at a higher level and I make my way slowly up to them. I’m aiming for one particular group where there is a 50-degree slabby rock which we called ‘super slab’ on our first visit, I’m inclined to overdramatize but it is super. Perfect clean steep rock, rippled slightly with the odd pebble for a finger hold. 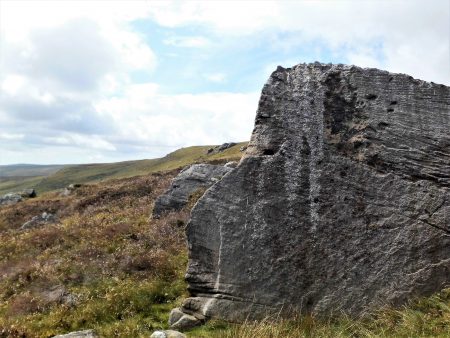 Down below is that massive stone trough carved from an in-situ boulder. Time for another sit and contemplative look down the valley towards Pendle. I have time to examine the minutiae of the lichen growing into the gritstone. 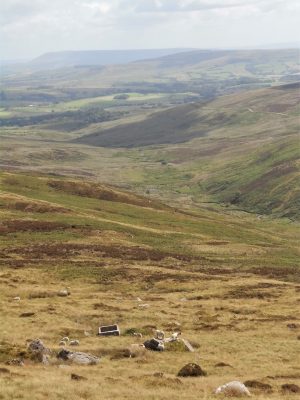 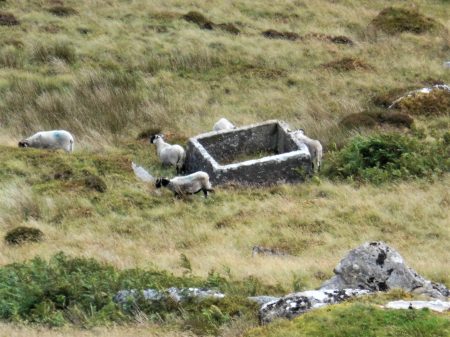 I then head down to pick up a hidden sheep trod in the bracken that I know will take me across the rough hillside to join an estate track down to the ford. It had been at the back of my mind all afternoon as to whether I would be able to safely cross the stream here. One winter it was impossible and we had to make quite a detour to find a way across. Today, despite the recent rainfall and the stream flowing quickly, I seemed to just hop across.

Back on the main track, I had time to reminisce on times staying in the barn visible down below. It has been overhauled by United Utilities partly to preserve the unique sheepfolds that surround it.  Once with my eldest grandson, we had two nights there and were treated to hen harrier flypasts both evenings as we sat by a campfire eating baked beans and sausages, magic.

From up here, I could see in the distance a small section of Stocks reservoir where I could well have been. Another time. 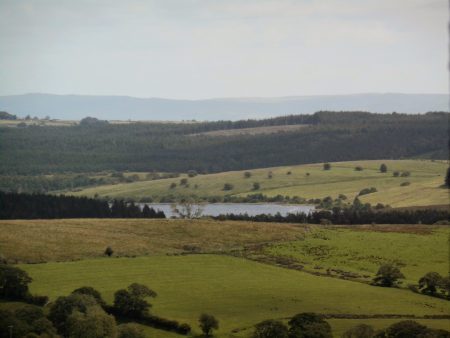