I have lost my camera with this day’s photos on. When I say lost I mean I can’t find it but I’m certain it’s in the car or the house. After much searching it still hasn’t turned up. My mind’s not focused as it is the funeral of my best friend.

Yes, it has turned up under the carseat!

The day itself, a week ago, was brilliant.

As you drive through Claughton on the Kirkby Lonsdale road an aerial ropeway crosses above you carrying clay in buckets down from high on Caton Fell to the brickworks by the road. I’ve always been curious as to what’s at the top of the ropeway. The other end of the rainbow. Today I intended to find out and dragged Sir Hugh along for company.

We parked at The Fenwick Arms, sadly closed as a result of lockdown and other financial pressures. One of the many casualties.

A steady 1000 ft. ascent on a previously cobbled track with not much to see, Claughton Hall was hidden behind trees and Claughton Beck could be heard but not seen. Near the top we walked under the upper part of the ropeway. The buckets were trundling up and down by gravity feed. Constructed in 1924, this is the last gravity feed aerial ropeway operating in Britain. We crept into the upper quarry to see where the buckets were coming from – the answer was a shed where presumably the shale and  clay was loaded. There was a large quarry behind. We need not have trespassed as there are plenty of YouTube videos.

We came out onto the open moor near the wind farm and past the restored Moorcock Hall – certainly one of the remotest houses in Lancashire with a splendid view over Morecambe Bay.

A diversion was suggested to the trig point, 361m, of Caton Moor. We had walked past here on The Witches Way in 2016 without visiting the top. It was fairly barren up here but there were good views over the northern Bowland fells with the shapely ‘peak’ of Mallowdale Pike catching our eye, one for another day?  Ingleborough of cause made an appearance. 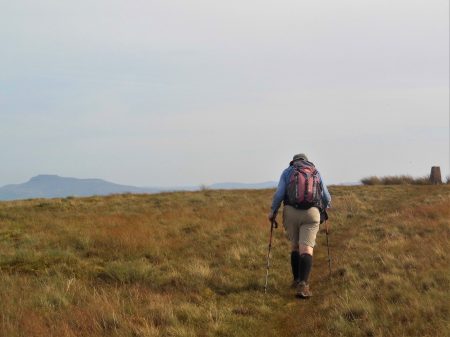 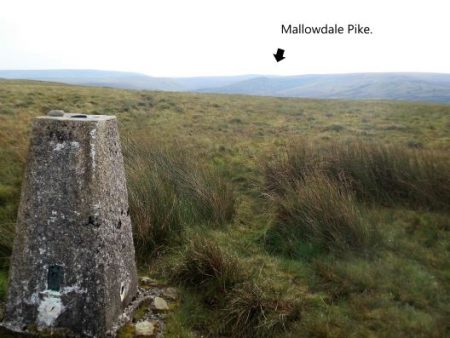 On the way back Sir Hugh spotted a couple of workers on one of the wind-turbine blades, I think I would have walked past without noticing. They must have abseiled down for some repair work which looked perilous from below.

I tried an arty shot with the juxtaposition of wind power against nuclear, Morecambe Power Station in the blurry background.

After the excitement we found a picnic bench for a civilised lunch stop. Two ladies on an adjoining bench were having a conversation where they both spoke at the same time.

The tarmacked lane down to Brookhouse went on for ages in the ever increasing heat of the sun. 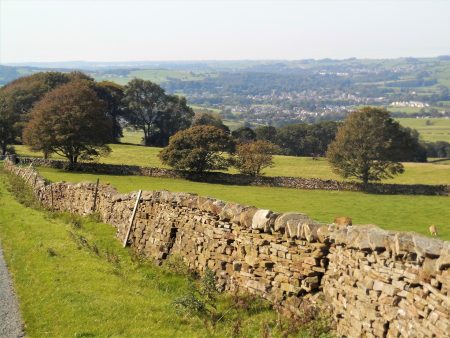 Brookhouse is a charming olde worlde village which modern times and the main road have passed by. 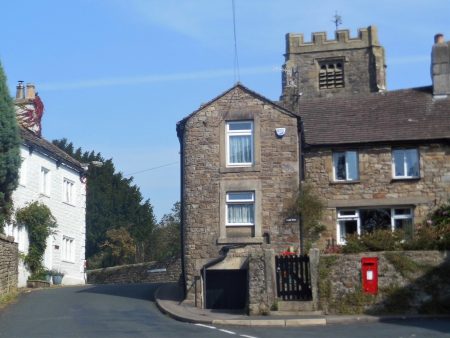 We were glad of a sit-down in the church yard where fresh cool water was found.

St. Paul’s church dates from the !6thC. Built into the West wall is a Norman Arched doorway. Set into it are stones from former buildings, various Medieval marked stones. Rather a shambles really. 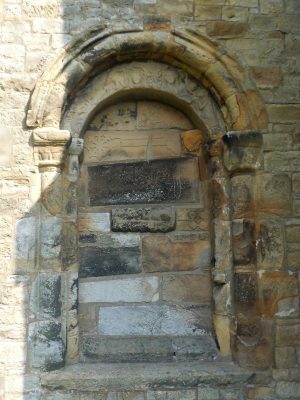 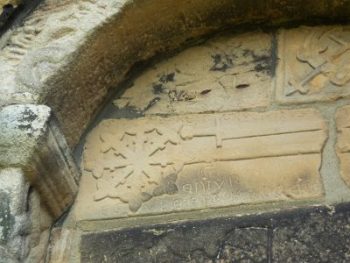 Whilst in the pretty village we had time to find the Plague Stone. Set into the parapet of the bridge next to the pub is a large stone with a hollowed-out top. In Medieval times plague epidemics killed thousands of people up to the late C17th. Victims socially distanced themselves outside towns but collected food from the stone. It is thought that the depression in the stone was filled with vinegar to act as a sanitiser for the coins left in payment. Does this all sound familiar in the twenty-first century? 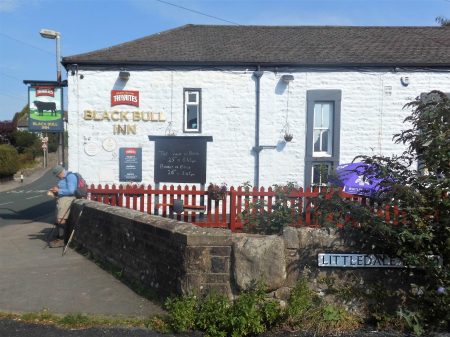 A field path took us to the busy A683 which we crossed to get onto the disused railway line [Lancaster to KIrkby Lonsdale] this provides a cycle way out of Lancaster city centre but sadly comes to an end near here as far as public access is concerned. The River Lune curves elegantly through the fields and despite its attractiveness there is little in the way of a marked path. A lady was swimming in one of the pools; it looked very inviting in the hot sunshine. Ahead was Ingleborough with Hornby Castle prominent upstream. Fields separated us from the brickworks with the windmills visible on the moor above.

Heading back into Claughton we crossed the site of the old railway line at Gatekeepers Cottage. There was no sign of life at The Fenwick Arms.

On the drive home I stopped to take a photo of the aerial ropeway and its yellow buckets crossing the road, I now know where they come from.

3 thoughts on “CLAUGHTON BRICKS, CATON FELL, THE PLAGUE AND THE LUNE.”