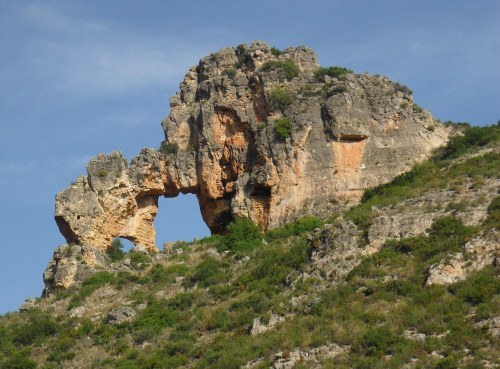 The forecast was for high temperatures and as I knew I would be in a deep canyon [barranca] for several hours hoped to get away early. But the taxi couldn’t come till 9 so I was able to enjoy a full fuel filled breakfast. The gas cylinder was safely left with the manager for my return in a couple of weeks. Was soon stood at the lonely roadside I’d left yesterday as the taxi disappeared. Tinterero was in the mist and as I walked down the track it felt just like the moors back home.

Except the temperature was already in the high 20s – I had plenty of water with me. Water becomes more important than food on these sort of days. Strolled along until a path diverged off to the right and started descending steeply into the Barranca Boquilla. The waymarks here about seemed more related to mountain biking than walking – signs of the times?  Anyhow you couldn’t go wrong, just keep going down for 400m. Past the famous rock arch pictured above. There seemed to be a whole series of barrancas cleaving into the hillsides. This is a spectacular place. 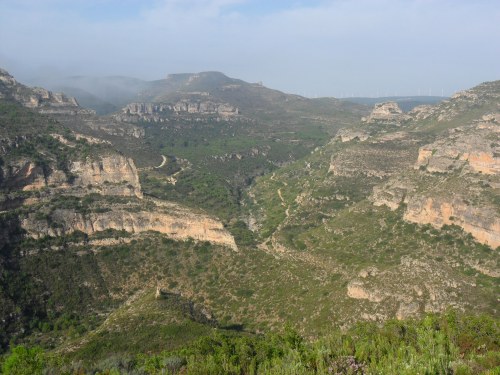 Now down at the bottom a decent track snakes along the bottom of the gorge past an abandoned farmhouse  – imagine living down here.

As the barranca runs in a north/south axis the sun was shining directly into it so most of my pictures were looking back! This was just an amazing place to be in, a wonderful walk but also a fantastic nature environment. When you stop there is time to appreciate the variety of flying insects around you – including the biting variety! Time to put on trousers again. What one didn’t see were any raptors soaring above. The locals love to shoot anything that moves. You have been warned.                                                                            The track twisted and turned probably doubling the horizontal distance traveled.   There was a  great deal of variation in the limestone walls of the gorge. 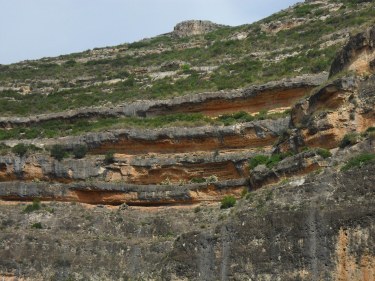 The track became rougher and eventually ended up in the steam of the gorge; don’t know how you would get on after heavy rain. Saw a wild dog and a group of rebecos [the Spanish chamois]

I spent almost three hours walking down the barranca with little shade. I was not looking forward to the crossing of the valley floor to Vallada in this heat. Went under roads, motorways , old and new railways in this busy artery of central Valencia. What a contrast to half an hour ago.

Met a French couple walking the pilgrims route from Valencia city to Santiago de Compostela. Wished them well as they have an awful long way to go.

Scallop shell – symbol for the pilgrims to Santiago.

My pilgrimage was to an apartment in one of the cluttered streets of Vallada.

Did a bit of re hydrating in one of the bars in town, full of unemployed men playing dominoes. The churchyard contained some good interpretative art. 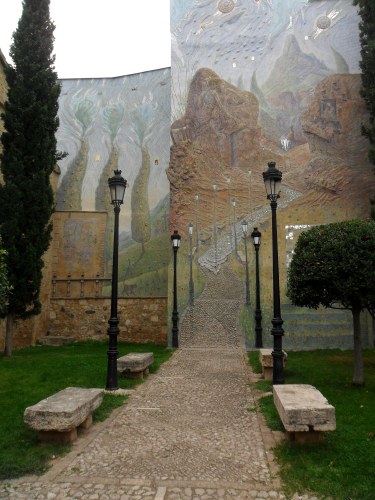 A good meal was taken in a local restaurant and I slept well. What more can you ask from a days walking.