The black ‘vineyards’ of LA GERIA.

Early morning and I’m back at Uga and a coffee in the bar after the bus trip. 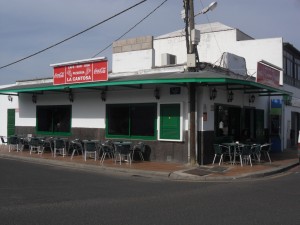 Well signed lanes lead out of the village and a track starts climbing up towards the cone of Montana de Guardiama through a dessert of black ash.

I’m passing through a well known wine growing area, La Geria. How anybody grows anything here in the black ash is a miracle. But the hillsides are covered in semicircular wind shields around pits dug in the ash with vines hanging in there. The amount of work involved must be immense. At the col I drop my rucksack and head steeply up Guardiama, missing my poles because I travelled hand luggage only. Soon up at the trig point, 606m.

The volcanic rocks hereabouts are encrusted in lichens reflecting the moisture laden air of the Atlantic.

Views are rather misty but I can see the coaches heading into the volcanic Timanafaya national park. Enjoyed the airy perch.   Ahead are the volcanic summits around Conil and Montana Blanca my destination.

Unfortunately its road walking that takes me there passing white villages of mainly holiday villas. Some people must have ideas of grandeur… 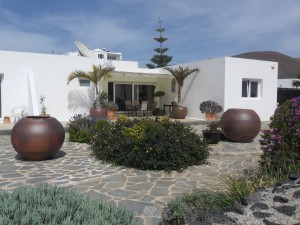 and the locals just live…

Passing between volcanoes I arrive in Montana Blanca and there in front of me is the bus stop. My bus is due in 15mins but after an hour I wander to a nearby bar to make enquiries – no that bus stop is no longer used and it ill be another hour before the next bus.  Get me a taxi is my response and I’m back in Arrecife in 10mins for 12Euros. 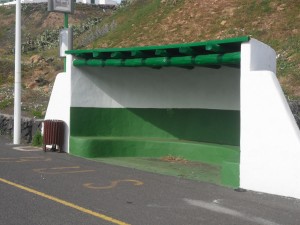 In recognition of the La Geria wine growing area I’ve walked through today I buy a bottle of the local Yaiza red wine to enjoy with my supper.