The title is not strictly true as the military have a well defended installation on the highest point, Penas del Chache 675m, as you can see from the above picture. The day started gradually along the usual sandy track through fields out of Teguise, there were some striking examples of the crushed black larva fields. 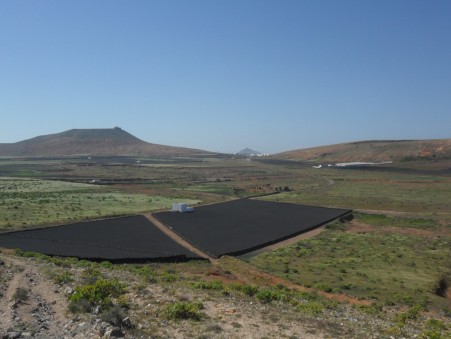 Teguise in the distance.

It was already hot and sunny and the wind seemed to have abated. As I gained height euphorbia and senecio plants dominated the rough ground.

The beautiful white Ermita de las Nieves provided a sheltered haven for a snack, the wind had strengthened again. Whilst sat there a man appeared with a bunch of wild flowers, produced a vase and water for them and having lit a candle in the doorway  said a silent prayer. The place was obviously important to him and the simple ceremony touching.

Whilst up here I also witnessed  the surreal sight of a mule stood in the back of a pickup truck being transported slowly, presumably to some new field for work. Alas not fast enough with the camera.

A thrilling hour was now spent traversing along the lip of the cliffs dropping 600m to a wild Atlantic sea at Farmara. One could just see the Island of Graciosa. Wouldn’t have approached so close if the wind had been any stronger, as it was I was hanging on to my hat. Fantastic spot.

Descending into Haria was rapid on an ancient paved track zigzagging down crossing several times the modern road zigzagging up. This road seemed very popular with cyclists powering up, they all looked very fit. There were quite a few English voices amongst them so maybe they are here for winter training.

Haria was another pleasant white village with some lively cafes, the coach trips were in.