It started well, a filling, early breakfast and I was confidently walking through the streets of Starnberg. But something wasn’t right as I wasn’t leaving the Lake, after 500m I turned about and retraced to the centre. There it was –  the street I should have taken completely closed and dug up, no wonder I missed it. Feeling cross with myself having wasted 20mins I stode round the obstruction and  on into a small gorge of conglomerate limestone. Walking by a lively stream I quickly left the dog walkers behind.

I realised I was walking through a military zone by all the signs. There is something about the German word Verboten that makes you sit up and obey, I must have watched too many 2nd rate war films. Safely out of the war zone I was soon in green meadows and following gravel paths towards the Maisinger See. Another sign had to be obeyed – out came my poles. 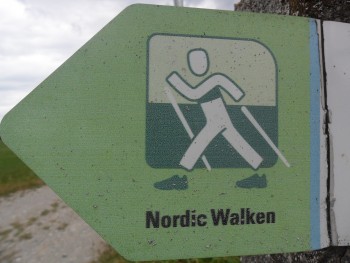 A welcoming gasthof on the shore providing a coffee break entertained by the village tots (some as young as five)  diving in. Farmland, with distant alpine peaks on the horizon, led to the small village of Aschering with its pretty church. 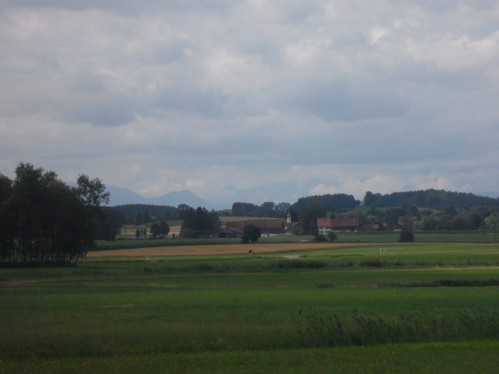 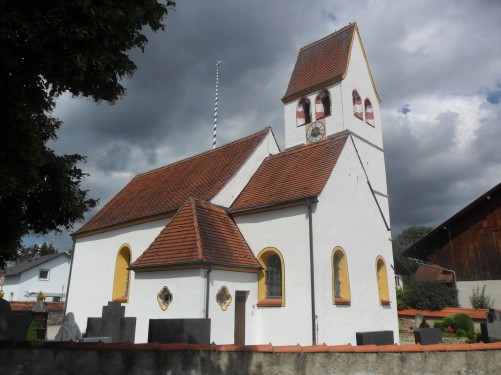 Once the real Andechs Abbey was in sight I was on a ‘holy way’ and passing the holy shrines. These contained beautiful relief depictions of the stations of the cross – you know the story.

The lane led up into the Abbey and it was here I realised there was another Pilgrimage taking place. The noise level built up and you realised that over 50% of the Abbey grounds was occupied by a drinking and eating parlour, and the party was in full swing! It was a steady flow of frothing tankards and piles of food. The Abbey is famous for its wheat beer brewed here for centuries. 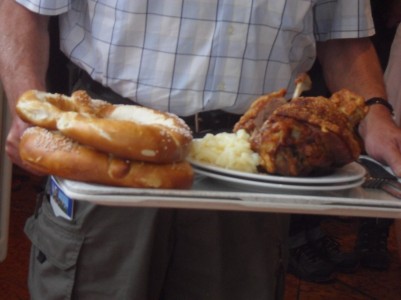 The church interior is hard to describe, think gilt. Some of the original treasures were saved. Today the opulence of it all was softened by a girls choir singing simple arpeggio hymns – quite moving for a hardened soul like mine. 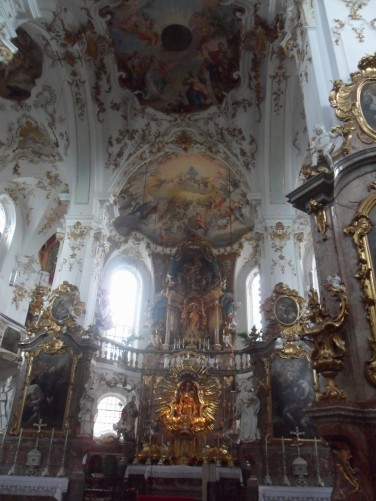 My Pilgrimage was completed by a glass of the famous dark beer, I opted for the smaller 500ml rather than the litres most were quaffing.

Made quick progress down through another delightful, wooded gorge to the busy town of Herrsching for the boat across the Ammersee. The lake was a mad flurry of hundreds of sail and kite boarders all enjoying the very windy conditions. I was impressed that the ferry didn’t plough into any of them as we crossed. Ðiessen came as a peaceful relief and my lakeside lodgings were perfect.

2 thoughts on “KING LUDWIG WAY – a day of Pilgrimage.”