The village of Staveley with the fell rising above.

It was still early when I came down from Newton Fell so I drove up the valley and parked in the secluded hamlet of Staveley, strangely there was nobody about. The lane leading to the fells was rather dark and enclosed. My planned route was soon blocked off by deer fencing, Wainwright’s book is 41 years old and obviously in this area of plantations inaccurate. A little further on I found a waymarked path in the right direction. It led up through trees but was hardly trodden and one of the roughest ‘paths’ I have used. I had previously been in this vicinity whilst geocaching with Sir Hugh    https://bowlandclimber.wordpress.com/2014/12/01/treasure-hunting-on-simpson-ground/    I have frightening memories of primaeval bogs so was a little apprehensive of venturing into the area again. What Wainwright described as open fellside turned out to be a morass of felled trees and branches. Finding the best way was impossible and I took ages heading up the vague ridge. Over several false summits, my altimeter announced I was at the highest point, 265m, a small cairn with at least a grand view to Windermere. The pale sun had never quite escaped the greyness.  Gummer’s How, climbed with my Grandson this last summer, seemed only a stone’s throw away. I could see a forest road down to the east across a Somme like desolation and I eventually staggered out of the trenches to reach it. I recognised this road as the one Sir Hugh and I had escaped on after our nightmare on Simpson Ground. It took me quickly through the forest to a path leading back to the village and in retrospect would have been the far easier approach to the summit.

In a lower open fellside, grazed by ponies, numerous wooden cages had been constructed presumably for tree planting but each one was strangely empty. Reminded me of the council worker digging a deep hole, resting on his spade for 5 minutes and then filling it in again. When queried about his labours he simply said the chap who plants the tree was off sick. Mild humour on an otherwise humourless outing.

The other things to note about the secluded houses of Staveley were a Victorian post box in a wall and an elaborate miniature railway layout complete with a herd of llamas. 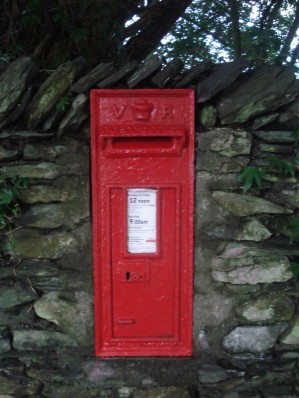 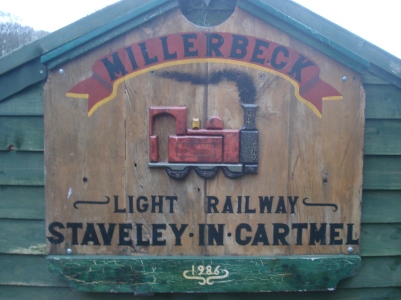 Today was a purely selfish summit bagging outing and I was glad I hadn’t inflicted it on any of my friends, relationships would have been strained. The terrain encountered was a severe obstacle course and I certainly wouldn’t recommend visiting in mist.  Maybe to ease my journey through Wainwright’s Outliers I should invest in Chris Jesty’s update, or would that be cheating?

3 thoughts on “The stuff of nightmares – Staveley Fell.”