Eight fells in one.

This was a grand day out, everything seemed to fit – good weather, excellent walking with views and interesting companionship, Sir Hugh. I had concocted an extended circuit of the Wainwright Outliers surrounding Devoke Water and wondered whether we would be up to it not knowing the terrain.

Devoke Water is the largest tarn in the Lakes and boasts a two storey boathouse and a tiny island. The first two summits, Rough Crag and Water Crag, to its north were reached with little effort and acted as a warm up for the day. Looking back three men were on the same circuit. Having dropped down to the stream coming out of the tarn there was a tedious climb up to the much higher White Pike and its columnar cairn. From this lofty height we gazed into Eskdale and reminisced on walking over Muncaster Fell on the classic Ravenglass to Shap walk. Muncaster Castle could be seen in the trees, I have a couple of Rhododendrons purchased from there which are about to come into flower in my garden. Nice connotations for me.

The three men on Rough Crag.

The other three slowly followed but we came off the ridge, plunging down the crags [Sir Hugh resorting to the ancient art of bum-sliding] to visit the volcanic pimple of The Knott. From here we worked out a traverse across the moor before a steep ascent up to Stainton Pike. We were still out of breath when the three gents joined us and wondered at our erratic course, mutual group photos were taken with the Scafell Range and Great Gable in the background. Lunch was taken in the warm sunshine.

The Knott and White Pike from Stainton Pike, Muncaster Fell in the background.

Sorry that was my cat walking across the keyboard, spellcheck couldn’t interpret it.

An exhilarating high march across Yoadcastle and Woodend Height, lovely triangular cairn, provided the best views of the day into central Lakeland. From there it was a direct line down to the boathouse. Gaining our last summit, Seat How, proved more difficult as it was ringed by broken crags breached only on the eastern side. 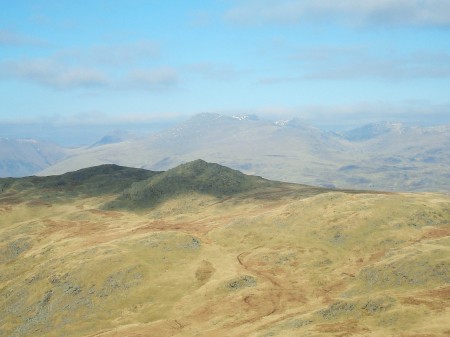 Yoadcastle and Woodend Height along the ridge.

Seat How on the right. 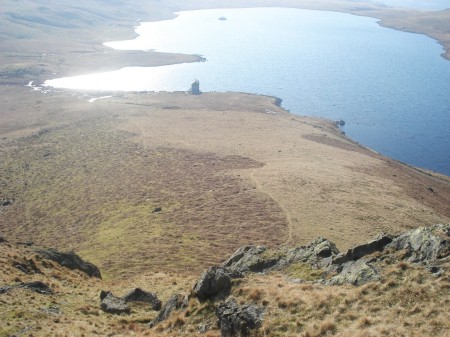 Last view down onto Devoke water.

Hopefully Spring is here but I’ve known it snow at Easter.