I’m sure the residents of Cleator Moor don’t consider themselves ‘back of beyond’ but that was my impression when I passed through this morning. It had taken me nearly 2 hours to drive to this side of The Lakes, the streets looked empty and forlorn, festooned with TV satellite dishes. This is probably a popular local walk, however everyone now seems to park at the top of Nannycatch Road as I did to walk a shortened version of AW’s route.

Cleator Moor with Dent above.

Flat Fell was flat.  But had the benefit of a sudden revelation of the Loweswater, Ennerdale and Scafell ranges, poor conditions for photos.

When I was back down into the hidden if not exactly remote, Nannycatch Valley signs for the Coast to Coast route appeared and took me up the steep side of Dent. Can’t remember climbing up here fully laden on the penultimate day of our east-west crossing in 1979, must have been a struggle. My diary tells me that we wild camped in the woods above Cleator Moor before finishing the next morning. Also, it states that the average charge for a farm campsite was 30p.  I took a direct moss cushioned hillside to my car and drove to Coldfell Gate. On the way, at Egremont,  passing Florence Mine the last working deep iron ore mine in Europe until closed in 2007 and now an arts centre. The miners were known as The Red Men from the haematite dust.

From Dent looking over Flat Fell to Ennerdale.

Cold Fell was cold and had no merit whatsoever. What was I doing here Mr AW?

Back at the car the weather was changing, cloud and dampness, and I was losing my resolve. It was only the thought of the petrol costs to get here that had me drive through lanes to my next objective. My radio told me England we’re collapsing in the world T20 final against the W. Indies, Leicester were winning again in the Premiership, and European agricultural pollution was affecting the SE. [May not be that easy to exit from Europe after all]

For convenience, I chose a way up from Stakes Bridge in the Calder Valley. This is sheep country and the farmers were out on lambing duties. Enclosed fields reminiscent of the Dales took me to the open fellside leading to the plain top. Scafell crag appeared briefly. The weather had improved, could the rise in temperature have anything to do with nearby Sellafield?  From up here you see the full size of the complex.

Heading off the hill I was impressed with the enclosing walls made of sandstone with a capping turf full of ferns and moss.

In a field was a Larsen magpie trap, these are legal in appropriate circumstances, complete with a live magpie as bait. The logic is simple – another bird is attracted and trapped – shoot the first and start again. A friend of mine employed one in his garden and quickly caught a bird. He didn’t have the heart to kill it so drove it ten miles away and released it, I wonder who was back first. 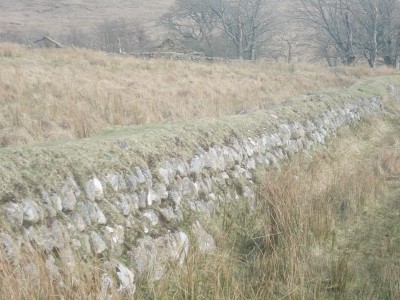 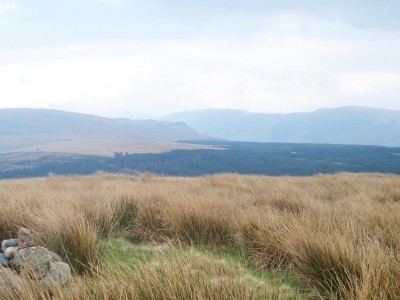 I was back at the car as the rain started, mission accomplished.

AW states “there are no fells not worth climbing, but Ponsonby  Fell is very nearly in this category…” Actually, I quite enjoyed my circuit and found much of interest. Methinks he doth protest too much and should have directed his comments to Cold Fell.

16 thoughts on “Wainwright Outliers – back of beyond.”