Up to The Kasseler Hūtte.

The usual bus/train/plane/train had us into Mayrhofen by tea time, sorry coffee time. Our booked  Gasthof Zillertal on the outskirts of town looked a little austere but turned out to be friendly, clean and economical. Basic rooms perfect for one night and a good breakfast thrown in. Mayrhofen is touristy with plenty of funny hats and cuckoo clocks for sale. We retreated into the traditional Berghof Hotel for a civilised dinner of Goulash Soup and Lake Pike fried in butter.  Slept like a log. 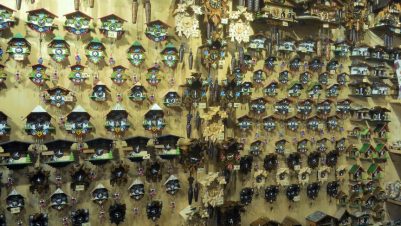 In the morning we walked up to the TI office where we were to catch a private mini bus, sitting outside the time for departure arrived but no bus. A glance down the road spotted a likely looking vehicle which we just managed to board before it departed. Up the Stilluptal valley we passed a famous waterfall and continued on a private track in increasingly dramatic scenery to Grüne Wand Hütte. Here we felt we deserved some refreshment before setting off – it was the best apple strudel I’ve ever had!

The steep zigzagging trail through woods and then rocks brought us in 800m to the Kasseller.  A traditional hut sitting on a promontory with excellent views of tomorrow’s walk. I am with the ‘rockman’ and by chance on the terrace in the sun he met a fellow geologist from Israel, much discussion ensued. There was a lovely display of local wild flowers all labelled which interested me more. 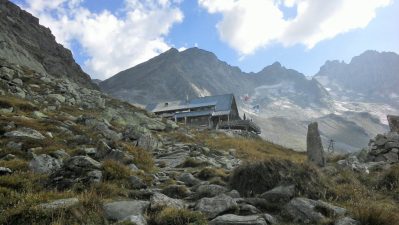 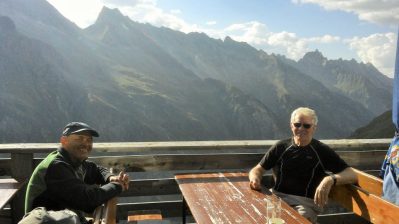 We were humorously quizzed about Brexit by the guardian – if you voted in you had a room, if out all you got was a mattress. The usual evening meal was followed by a talk from the guardian about the various route options and the weather [set fair] – a nice touch if we could have understood it all. You may have noticed we’ve hopped into the route on day 2 to avoid the 9hr day from the Edelhûtte. It’s called the Berliner Höhenweg because most of the huts are run by the Berlin section of the German Alpine Club, DAV. 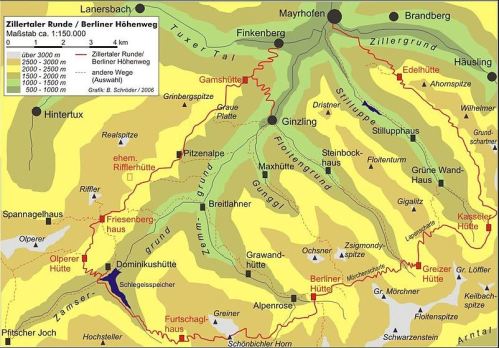