My friend Peter from Forton got wind of my travels up the canal and volunteered to accompany me on the next stretches, he has a wealth of historical local knowledge so I readily agreed. I came away far better educated but with less photographic evidence due to all the chatting!

As I descended from the bus, there is an excellent service linking Preston with Lancaster on the A6, he was there and understood my need to retrace my steps along the Wyre to the aqueduct to regain the canal up the steps. Nearby they were dredging the canal, a continuous task I presume, some of the detritus was on display.

On the far side was Garstang Basin, now a marina. The Tithe Barn building, converted to a pub, predated the canal and was brick built. 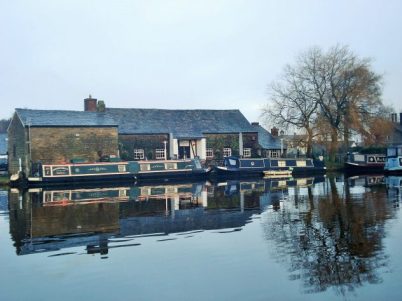 A pipe bridge carries water from Barnacre reservoir to Blackpool.

The canal was busy with a few boats moving about between the smart marinas and moorings, the towpath also seemed popular with dog walkers. Not all boats are equal. 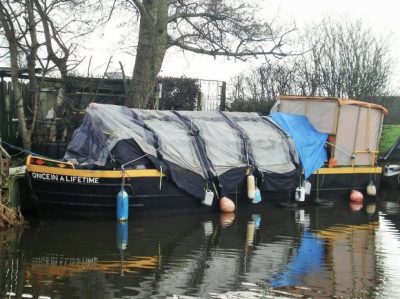 Peter was keen to find the site where the Garstang to Pilling railway line crossed the canal – I think we found it at bridge 65, now demolished. This line was known as the Pilling Pig from a locomotive whose whistle squealed like a pig. It connected the agricultural land of this part of the Fylde with the railway network until the 1960’s. The remains of the bridge…

We were soon into pleasant wooded countryside, lots of curves guided us through the nebulous area of Cabus. All very pleasant. Despite the temperature being just above zero we were soon taking off layers as there was no wind and hence no chill. We reached Ratcliffe Wharf another busy marina but at one time important for shipping of coal and lime. Just north are mounds, the ‘obvious’ remains of lime kilns responsible for this trade.

Forton lies a mile southeast of Bridge 79. Apparently it became the richest village in England due to the payments received when the M6 motorway was built. The small basin at Richmond Bridge was constructed for transporting stone from the nearby quarry, which is now disused.

The bridge leading to Ellel Grange is more ornate in keeping with its stately surroundings. There is a strand of lovely trees by the canal at this point – all very picturesque. 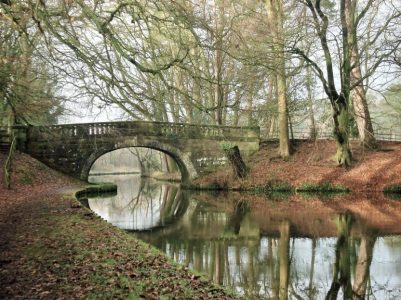 A little further, the miles go quickly on this flat terrain even with my poorly hip, is the junction with the Glasson Branch. This links via 6 locks to Glasson Basin and into the sea through Glasson Dock. This was a vital link into the canal when Glasson was an important port, superseded by Preston in due course. I should return sometime and walk this section. At the junction a graceful bridge carries our towpath over the branch. Close by is the lock keeper’s cottage and today his wife was tending the garden and gave us a potted history of the area in that lovely Lancashire drawl.

Soon we were in Galgate, another canal basin, and waiting for the bus home, the pub by the bus stop sadly closed as is the lot of many village inns these days. Galgate was the unfortunate scene of severe flooding of the river Condor just before Xmas and many of the cottages are drying out – a long process.

Corniest boat name of the day…