An easy half day on the Tweed Valley Railway track.

The bus from Galashiels deposited us in Innerleithen, book shops, printing workshop and historic woolen mills. More importantly the high street Whistle Stop Cafe, [appropriate name considering today’s walk] favoured by cyclists, gave us a lunchtime soup. We wandered off to find the old railway track which has been utilised as a walking and cycling route to Peebles alongside the River Tweed.

We didn’t have time to visit Trachair House out of sight on the other side of the river,  a hunting lodge owned by the kings of Scotland. It later became the home of the Earls of Traquair and is still lived in by their descendants. It is known as the oldest inhabited  house in Scotland.

The walking was straight forward on the surfaced track. Originally part of The Peebles Railway Company who extended their Edinburgh to Peebles line as a single track to Galashiels, [or Gala as everyone calls it apparently] it closed in 1962. As we walked there were many reminders of the railway in the form of fences, bridges cuttings etc and even a small station which has survived and now runs as a cafe, Nashy’s. A pleasant surprise which we took advantage of for a coffee out of the cold wind. 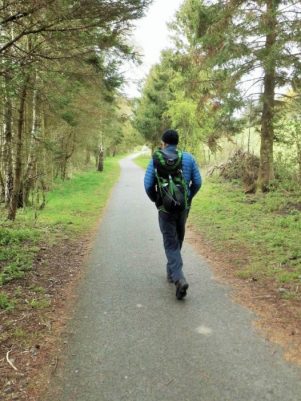 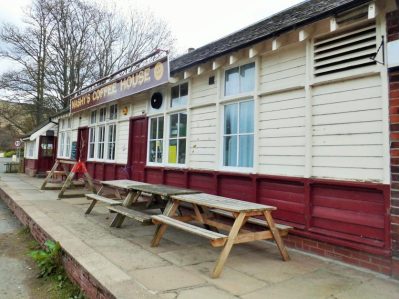 The station was in the village of Cardrona which seemed to be set out as a model village all well ordered and clean. We later found out it had been built in 1999 – 2002 by a local farmer speculator Tom Renwick. Further on was a fine looking golf course.

We continued alongside the River Tweed, a lone fisherman was casting in the water. All around were the rounded hills characteristic of the Southern  Uplands.  Fields that were a giant flood plain led into Peebles where Wetherspoon’s Cross Keys Inn was more than adequate for the night.

Peebles was a buy spot with a typical Borders high street of solid buildings, Initially a market town, it played a role in the woolen industry during the 19th and early-20th centuries. In the 19th century health tourism flourished with hydropathic centres, Peebles Hydro Hotel survives but was out of our price range.

It’s good to be back in Scotland.

1 thought on “A WEE DONDER. 1 Innerleithen to Peebles.”