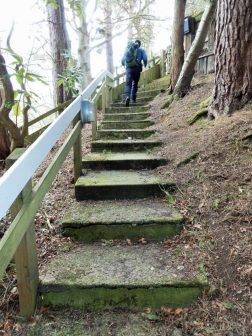 John Buchan, the author and diplomat, spent time in Broughton where his grandparents lived. He became famous for his thriller novel The 39 Steps published in 1915. There is a museum to him in Peebles. The John Buchan Way is a 14mile walking route devised to link Peebles with Broughton.  We decided to follow the first half of the route this morning. It was waymarked with a book motif out of the town up alleys and out into to the open heading for Cademuir Hill. This hill has Iron Age hillforts but disappointingly the route doesn’t visit them. Some of the higher hills in the distance, I think the Pentlands, still had patches of lying snow. Our route descended to a minor road where we were glad to put on waterproofs not just for the rain in the air but to shield us from the biting wind. This is sheep country ‘par excellence’, acres and acres of grassy hills with the newborn lambs released onto.

Hill Forts to the right. 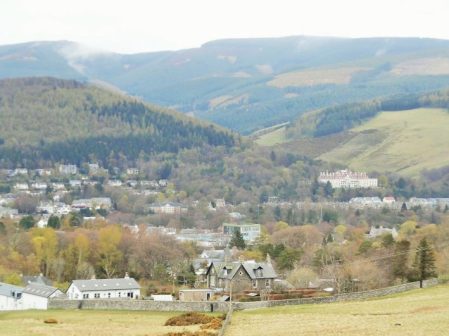 Looking back to Peebles with the Hydro prominent. 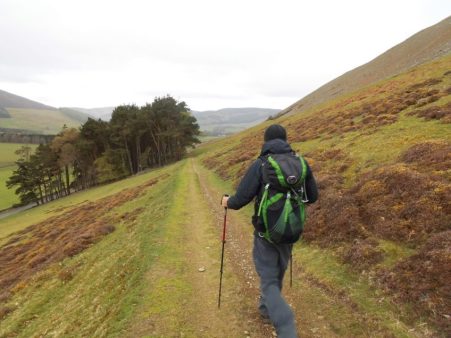 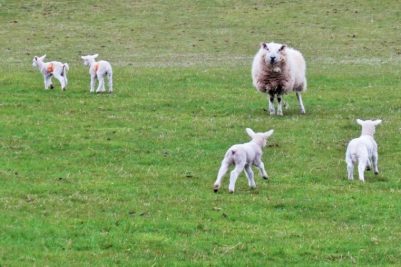 A minor col was climbed giving great views of the open Southern Uplands country. We dropped down to meet up with the Tweed again at Stobo.

Stobo Kirk is an ancient church of the Church of Scotland dedicated to St Mungo. retaining much of the original 12th-century building, including windows, the nave and chancel, unlike many other Roman Catholic churches which were destroyed after the coming of the reformed religion.The porch was added in the late 15th–16th century and is notable for the grooves in the left-hand doorjamb, created by pupils sharpening their slate pencils before class or possibly by the sharpening of arrow heads prior to the weekly after-church archery practice which became compulsory after the disaster of the Battle of Flodden 1513. The 12th-century Norman entrance into the nave has a door made from a single board of cedar wood from the nearby Dawyck estate.On the outer entrance hangs the old Jougs [yokes] used to punish recalcitrant members of the parish until some time in the 18th century.

The church looked a bit of a curiosity to be honest but we had a good look around at the features and then found a seat for lunch in the sun which had fortunately appeared to warm us. Many of the headstones in the graveyard were adorned with scary skull and crossbones, a Memento Mori, a reminder of our own mortality, an aide-mémoire, should it be needed, that you too will die one day. Time to move on.

We didn’t follow the longer and hillier John Buchan Way continuation. i optimistically thought that the dismantled railway alongside the Tweed would give us an easy walk into Broughton. This was the Symington, Biggar and Broughton Caledonian Railway branch to Peebles, closed in 1966. On OS maps of Scotland paths are shown as black dotted lines but there is no indication as to their privacy or right of way.  The dotted line was promising as we followed the obvious trackbed. Then there was a house and garden blocking our way, this was bypassed by a scramble up to the road. At the next obstacle we bravely walked past their kitchen window, I kept a discrete distance behind JD in case of dog problems. Safely through we enjoyed a long stretch of embankment walking, with the occasional entanglement in vegetation and boggy ground. 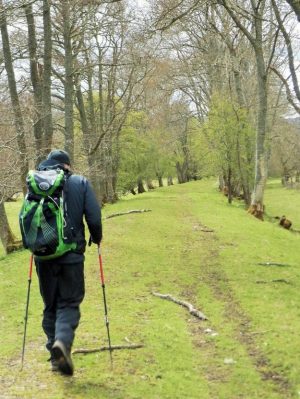 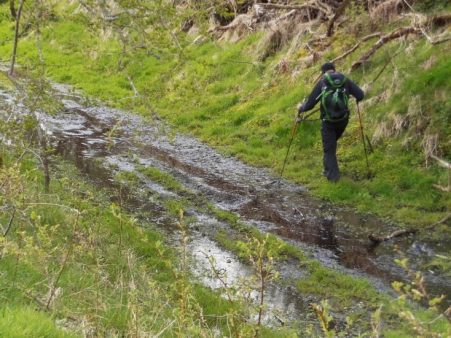 All the while the stately Tweed was by our side with views down the valley to the pointed local summit of Tinto, 707m. which was to feature for the next few days, Eventually we parted company with the Tweed and followed Biggar Water, more of a drainage ditch than a river, to Broughton where there was no accommodation but a bus, the ubiquitous 91, took us to Biggar.

The curiously named  Elphinstone Hotel, an old coaching inn, was our welcoming stop over. There was apparently a Lord Elphinstone at some point in history. Just call it The Elph.  They looked after us well, the beds were ‘biggar’ than most and the breakfast ‘biggar’ than we could eat.

With a little effort a viable walking route could be established that would link the Tweed to the Clyde utilising the old railway.

3 thoughts on “A WEE DONDER. 2 Peebles to Broughton.”