From my bedroom window this morning a rainbow greeted me but the weather was set fair for November, the day promised well.

We let Sir Hugh drive us to Rusland Church because he knew the way.  This time it was my idea to visit waterfalls marked on the map in the upper reaches of Hob Gill which feeds into Force Beck, a lonely tarn and remote tracks on a circular route. That was the brief and JD agreed to sacrifice his family fun for the day to join us.

Of course, the weather was perfect as planned. We were straight into the woods on a steeper than expected track over to Force Forge, a group of cottages by Force Beck. In hindsight, this was the most impressive fall of the day. There may have been a forge here but certainly, there were bobbin mills, now holiday lets in an idyllic situation. The surrounding woods had provided charcoal and other woodland products from coppicing and oak bark for tanning. There is an old tannery down the road. 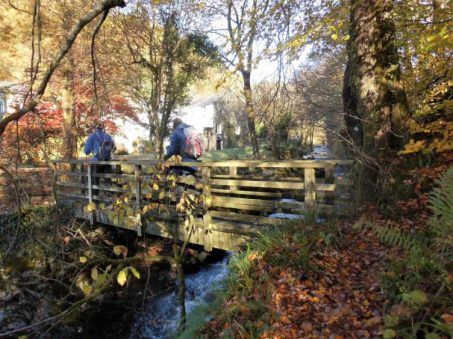 Crossing the road we found an even steeper forest track but were distracted by the Autumn colours. There was a pleasant mixture of ancient woodlands and conifer plantations. The waterfalls I had highlighted on my route turned out to be a small flow falling gently a few feet down the rocky hillside largely hidden by vegetation.

My next objective Wood Moss Tarn was thankfully more dramatic which rescued some of my reputation. Situated in a clearing providing reflected autumn colours across its still surface. We walked around it enjoying different views. The tarn is not present on earlier maps and was created by damning, 1964, for the possible reintroduction of beavers which hasn’t happened, yet.

The forest track we were following disappeared below the fallen leaves but we came out onto a little road as planned. The second half of the day was a contrast with easier walking in walled lanes through pastoral Cumbrian low fell scenery. 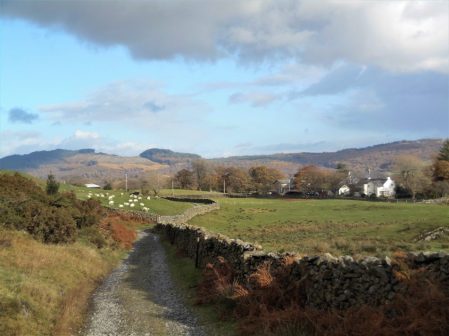 We took to fields on little-used paths and dropped down to a marshy area where a boardwalk saw us safely through. Signs proclaimed Greenwood Walks which turn out to be part of the interesting ventures of http://www.ruslandhorizons.org/

Coming full circle we crept round the back of Rusland Hall, built 1720, without seeing much of its grounds or facade and past the 1850 stable block.

Only a few fields to cross now but we were faced with a ford over our old friend the Force Beck, where it becomes Rusland Pool, but hidden away in the trees was a small footbridge which gave us safe passage.

A stone circle was spotted in an adjacent field, it is not marked on any map and is presumably of modern origin but why?  A final trespass and we reached the road close to the car. 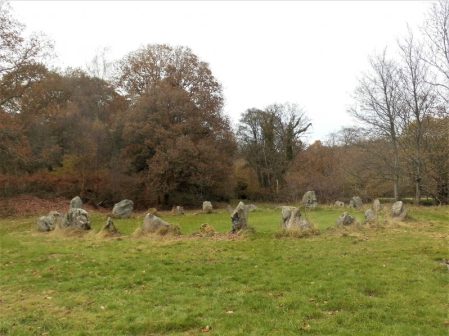 A  hold up on the motorway coming home marred what was a beautiful day’s walk.

4 thoughts on “DEEPER INTO THE FURNESS FELLS – RUSLAND.”