A comment from Sir Hugh on my last post, – ‘You seem to have an endless supply of walks full of historical interest.’ made me realise that there is so much history embedded in walking the rural ways of Lancashire. I was intrigued by the part played by Henry VI in the War of the Roses and his subsequent hiding out in our part of Lancashire, the internet giving a version of history at your fingertips. Having been in safekeeping at Bolton Hall, Bolton-by-Bowland he escapes to Waddington Hall. Whilst staying here in 1465 he is betrayed and the Yorkist Talbots from Bashall Hall come after him but he manages to escape down secret stairs only to be caught at the Hipping [Stepping] Stones over the Ribble at Brungerley. He ended up in the Tower of London. So there are quite a few places to visit on today’s walk.

When I parked up on the lane at  Backridge there was mist in the Ribble Valley, Pendle was hiding but the castle in Clitheroe was visible.

That was where I was heading and a clear path was discernible through the grass so without any thought or effort I’d arrived at Edisford Bridge and its eponymous Inn. 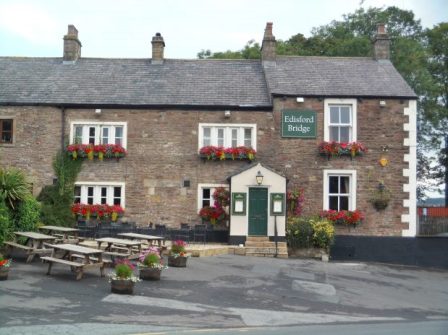 Tucked away behind a hedge is Edisford Hall of which I was previously unaware and today unable to get a good view of. The hall was apparently the site of a leper colony back in the 13thC. More history denied to the majority, the rich and powerful tend to keep their wealth and property hidden. I cannot deny them their privacy though, an ongoing theme in this post.

Edisford Bridge is medieval and the original ribs can be seen under some of the arches. The inscription on the parapet reminds one of the previous boundaries. The surrounding fields were the scene of a vicious battle [they all were] 900 years ago, but today all was tranquil with holidaymakers enjoying the sunshine on the banks of the Ribble.

I always find the route of the Ribble Way difficult to follow through this edge of Clitheroe. There are open spaces [for how long] but nothing is waymarked, then you are passing old cottages before being sucked into a modern housing estate, the likes of Kingfisher Way and Heron Mews.

Out past allotments the river is gained and followed to Brungerley. Last night’s thunderstorms had put more power into the water at a weir. Across from here one could see on the far bank Waddow Hall, idyllically situated above the river. An old house built in Tudor times by the Tempest family but modified by Jacobean additions. 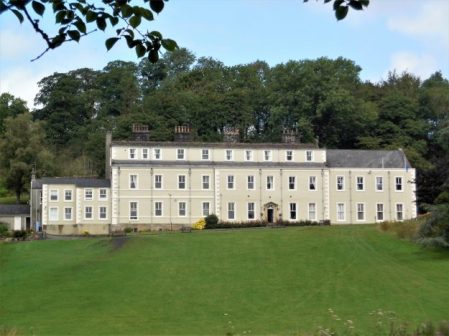 Further on a family were preparing for a roasting and hijinks in the river just before the bridge – ‘Brits on holiday’. Hottest day of the year?

Brungerley Bridge was built in the early 19th C, It was at the stepping stones here in the past that King Henry VI was captured. A steep stile climbs onto it, now with the obligatory safety rail.

Over the bridge a path is found into the grounds of Waddow Hall, unfortunately it goes round the back of the buildings. Waddow was bought by the Girl Guides Association in 1928 and it keeps its secrets well hidden, but not their exciting climbing tower which I sneaked a picture of, sorry.

Coming out of the grounds a quiet road winds into Waddington 3/4 mile away. I know this village fairly well from eating in the three public houses and wandering around the church. The main street has a stream running down the middle with attractive and well-kept memorial gardens. For a short time in 1990 it became Granada’s “The Television Village” with its own broadcasts from the village hall.

I knew nothing of Waddington Hall, hidden behind high walls in the centre of the village, its origins going back to the 12thC. It was restored in 1901 by the Waddington family. It was here Henry VI attempted to escape from Yorkist followers.

Up the road is a longstanding cafe with an unusual frontage of metal posts, their famous pies were cooling off in the kitchen window – another time.

The prominent church is unusually dedicated to St. Helen. the tower is the oldest part from 1501. Inside there are some intricate wooden details. Nearby are the village stocks.

But by now the Lower Buck Inn was beckoning and I succumbed to a pint of the finest Bowland Brewery’s Blonde Ale. They even allowed me to eat my own sandwiches in the beer garden. This is a great traditional village inn run by the same family for years. Try it sometime, even the dogs have their own brew.

Refreshed I found a hidden path, undoubtedly ancient judging by the clapper bridge, leading out of the village and into open fields with views opening up of Pendle, down to the Ribble Valley at Whalley and round to Longridge Fell. I passed in front of the impressive Colthurst Hall for which I can find no information although there is A King Henry’s Grove nearby on the map.

An old bridleway leaving the road at Braddup House, Whinny Lane, was marked on the map and I decided to follow it up the fell to an area I hadn’t been to for ages. This was at the base of Waddington Fell which I had explored whilst trying to link up paths for my Longridge Skyline Walk, LSW.  It was good to be out in the high country again and I followed that route all the way back to Backridge.

Up here I was surrounded by hills, Waddington Fell, Pendle and Longridge Fell all felt within touching distance, time for a panoramic shot including all three.

On the way back I passed Talbot Bridge with its date stone obliterated by moss and age.

The house above the bridge was originally a pub, The Woolpack giving an idea of the passing trade. Next door a Swiss-like house has appeared since my last visit, very twee.

My next point of call was the more graceful Saddle Bridge, 17thC but rebuilt last century, over Bashall Beck which has come down from Talbot Bridge. This packhorse bridge is also known as Fairy Bridge from a local legend.

Soon I was on a familiar track passing the intriguing Bashall Hall. This extensive building dates from the 16thC but has had many changes since in different stiles. It hides behind high garden walls but I managed a few more views today.

It was from this house that the Talbots set out to capture King Henry VI. So I’ve come full circle on what has been an outstanding walk for historical interest and the best Lancashire scenery.