The correct carpark was found this morning, 50metres down the road. We were the first arrivals and waited for a torrential downpour to pass. The start couldn’t be delayed any longer and waterproofs were needed for the light rain. We headed due east on a good track into the woods, mainly birch at this end with Scots pines further on. All around was heathland, waterlogged at this time of year, giving a pleasant start to the day despite the dampness. The information board states that this is one of the last remaining lowland heaths in the north. Longhorn cattle, Hebridean sheep and Dartmoor ponies graze it to help maintain the habitat. It must be a joy in the summer when the heather is in bloom. 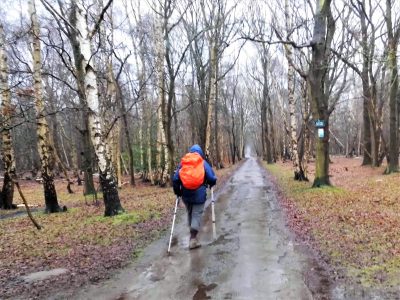 Good progress was made on the easy tracks and soon we were in North Duffield, a rather undistinguished village though it did have a village green and pond. Down a side street was a hut adverting woodcrafts, Stan was busy inside and offered to make us anything from a pillbox to a Welsh Dresser. It would have been good to purchase something from this craftsman who had previously worked in church restorations.

We had been dreading the 2K walk on the busy A163 road, there was no pavement but most drivers gave us a wide birth and by now the sun had come out. In the distance to the south was the massive Drax power station one of several in this area of Yorkshire presumably established when the coal industry was at its peak, what future now? 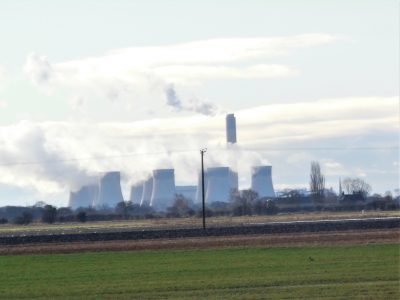 Over to our left was another nature reserve, the Lower Derwent Valley, and we wondered whether we could have found a way by the river. People were walking their dogs along the embankment and bird watchers scanning the flooded fields [header picture]. Our stint on the road came to an end at the elegant bridge over the Derwent.

Bubwith had some period brick houses and an old church started in Norman times. 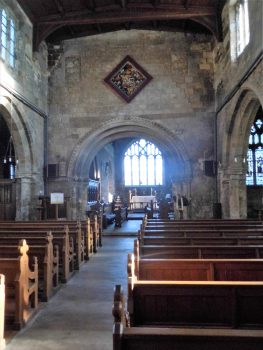 Whilst looking around the churchyard we found a seat overlooking the River Derwent for lunch. Looking at the map I notice that this river comes all the way from the North York Moors near Scarborough on its way to join the Ouse. There was a good view back to the bridge with its flood arches. 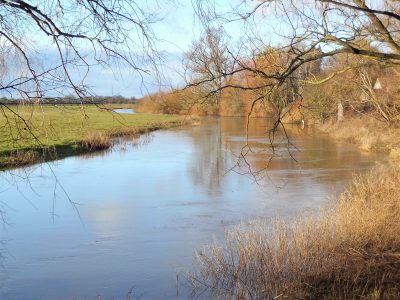 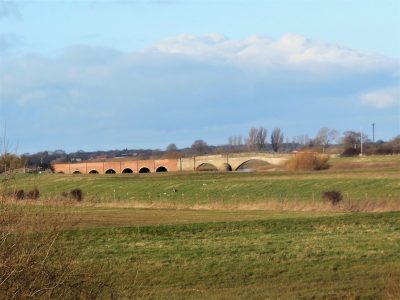 Originally when plotting a route I thought we would be stuck on the A163 a lot further but Sir Hugh had spotted an old railway line now converted into a trail. We gladly went slightly beyond our ‘mile either side’ limit to access it.

This was the route of the Selby – Driffield railway which closed in 1965. Work has been done recently to unearth Bubwith station platforms. On the way, we met a chatty man walking his dog who worked part-time counselling rugby league players at Castleford Tigers, sounds an interesting job. We steamed into Foggathorpe station ahead of the time table. 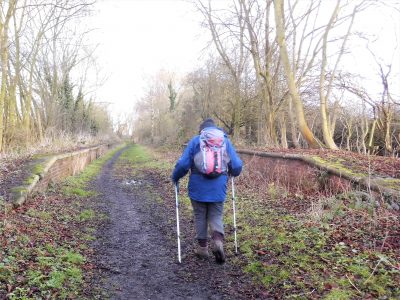 That was the end of our three-day jaunt on the 438 line, good walking each day and not a hill climbed or a Harry and Meghan mentioned.